The policy shift has come in time for the holiday season, when the beleaguered tourism industry is eagerly awaiting an influx of international visitors, especially in popular big-city destinations. 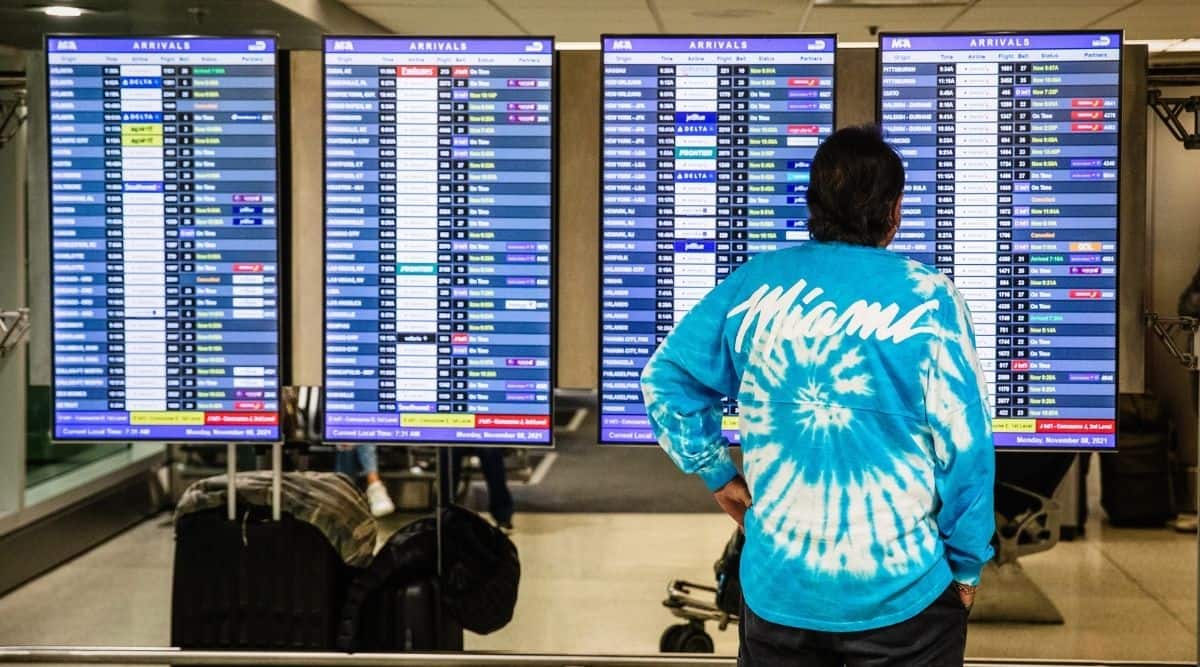 The United States reopened its borders for vaccinated foreign travelers Monday, ending more than 18 months of restrictions on international travel that separated families and cost the global travel industry hundreds of billions of dollars in tourism revenue.

Before dawn Monday, thousands of excited passengers flocked into Heathrow Airport for the first flights to the U.S. out of London. They were welcomed by dozens of airline staff who beamed and waved American flags as they ushered guests toward designated areas for documentation and security checks.

“New York, baby, here we come,” shouted one passenger as he high-fived a Virgin Atlantic staff member who was dressed as Elvis Presley. “God bless America,” yelled another.

The policy shift has come in time for the holiday season, when the beleaguered tourism industry is eagerly awaiting an influx of international visitors, especially in popular big-city destinations. Eager to make up for lost time, tourists traveling Monday had packed itineraries, from Broadway shows in New York and family days at Disney World in Florida to bingo nights in Arizona.

In New York alone, the absence of tourists in 2020 resulted in a loss of $60 billion in revenue and wiped out 89,000 jobs across retail, arts, culture, hotels and transportation, the state comptroller found. Although travelers from abroad account for just one-fifth of the city’s visitors, they generate 50% of the city’s tourism spending, according to NYC & Co., the city’s tourism promotion agency.

Towns along the borders with Mexico and Canada also suffered under the restrictions, which shut down land crossings to “nonessential” traffic and cost businesses millions of dollars. As a steady stream of traffic made its way through the San Ysidro, California, border crossing between Mexico and the U.S. Monday morning, Todd Gloria, the mayor of San Diego, said, “This is a great day for Tijuana, for San Diego, and for the entire binational region.”

Traffic at the Canadian border was less robust. Canadians returning to their country must take an expensive PCR test, which makes going to the U.S. for a quick shopping trip impractical.

Monday was a day for grandparents to hold their grandchildren for the first time, for couples who had to make do with virtual interactions for almost 18 months to kiss and for families toting balloons, bouquets and welcome signs to gather eagerly in airport waiting areas.

Among the first passengers arriving from Paris to New York’s Kennedy International Airport on Monday was Olivier Krug, the director of the Krug Champagne house. He had rushed to book as soon as the travel restrictions were lifted to attend a Champagne festival in New York, he said.

“I’m coming to represent my Champagne,” he said. “It’s not the same when you can’t clink your glasses together.”

Under the new rules, fully vaccinated travelers are allowed to enter the U.S. if they can show proof of vaccination and a negative coronavirus test taken within three days before departure. Unvaccinated Americans and children under 18 are exempt from the requirement, but must take a coronavirus test within 24 hours of travel.

While the new entry requirements ease travel for vaccinated travelers, they restrict people who were previously permitted to visit the U.S., including unvaccinated travelers from Japan, Singapore, Mexico and other countries. Those who have received vaccines that have not been approved by the World Health Organization for emergency use, like the Russian Sputnik V, will also not be permitted to enter.

The extended ban on travel from 33 countries — including European Union members, China, Iran and India — decimated the U.S. economy’s tourism sector and resulted in losses of nearly $300 billion in visitor spending and more than 1 million American jobs, according to the U.S. Travel Association, an industry group.

The reopening gave those in tourism-dependent industries a sense of hope. Chef Daniel Boulud, who owns several restaurants in New York City, said customers from overseas had started to call for reservations or to get placed on a waiting list before the ban officially lifted.

Few sectors of New York City’s economy lean more heavily on foreign tourists for revenue than the arts, and the city’s cultural institutions are more than eager for them to return.

“We’re waiting with arms open,” said Victoria Bailey, executive director of the Theater Development Fund, the nonprofit that operates the TKTS discount ticket booth, where about 70% of the tickets are bought by tourists and roughly half of those sales are to foreign travelers.

According to the Broadway League, the industry’s trade association, in the 2018-19 season, the last full season before the pandemic, 19% of Broadway patrons were from countries other than the U.S.

Ken Weine, a spokesperson for the Metropolitan Museum of Art, said that before the pandemic, international travelers accounted for about one-third of the museum’s visitors; without them, the museum has hit something of a “ceiling” on attendance, he said. And Weine noted that although New Yorkers may pay what they wish when they visit the Met, other visitors, including foreign tourists, must pay $25.

Many of the airplanes arriving in the U.S. Monday were full of travelers reuniting with family and friends after a span of almost 600 days. At Miami International Airport, a major hub for travel to and from South and Central America, Natalia Vitorini, a 28-year-old student living in Miami, met her parents on Concourse D after they got off the morning’s first flight from São Paulo, Brazil. She had her 3-week-old son in a stroller.

Her mother, Débora Vitorini, 56, who works in the biomedical industry in São Paulo, bought her ticket within hours of the announcement of the reopening date. She and her husband, Sergio, arrived a little after 6 a.m.

The last time they had seen their daughter was in March 2020. Natalia Vitorini got pregnant earlier this year, and gave birth to her son a few weeks ago. “I was waiting for the border to open so my mom can come to see my baby,” she said.

Some of the reunions were hard-earned. Jolly Dave’s odyssey started last weekend, with a seven-hour bus ride from the Indian state of Gujarat to Mumbai. There she took a three-hour flight to New Delhi, then boarded a 16-hour flight to Newark Liberty International Airport in New Jersey.

Dave, 30, was traveling to meet her boyfriend, Nirmit Shelat, 31, whom she had not seen since last winter, when she had returned to Gujarat, their home state, expecting to stay for a few months. But then India experienced a devastating coronavirus surge, and her travel was restricted.

On Monday morning, Nirmit was waiting for her in Newark’s Terminal B.

“My Lady Luck is back,” he said as he waited. “You can make daily calls, stay connected by FaceTime, but you want to experience her fingers, her touch, her kiss. She told me she wants to break the Apple wall.”

They saw each other from down a hallway, and embraced upon reuniting. She kept her mask on as they kissed. He grew emotional.

“The Apple wall is broken,” she said.

Airlines saw a big spike in online searches and ticket bookings for international travel — particularly from Europe and Latin America — after the administration announced in October that travel would restart Nov. 8.

American Airlines said bookings over the three days after the announcement were up 66% for flights between Britain and the U.S., 40% for those from Europe and 74% for Brazil, compared with a similar period a week earlier. United Airlines said that it sold more tickets for trans-Atlantic flights in the days after the announcement than during a similar period in 2019, a first since the pandemic began. Delta Air Lines said many of its international flights Monday were fully booked.

Hotels across the country, particularly those in cities, also felt the effect of the reopening. Hyatt, the hotel group, said that approximately 50% of its bookings by international travelers to the U.S. for the week of Nov. 8 came after the opening date was announced in mid-October, with travelers flocking to top cities like Los Angeles, New York and Miami.

The JW Marriott in Downtown Los Angeles saw a 17.7% increase in international bookings over the past week compared with the previous month. The city of Los Angeles is projecting an additional 1 million visitors and $1 billion in revenue as a result of the country reopening to vaccinated international visitors.

There had been concerns about long lines at the airports given the additional paperwork required to fly. At Heathrow, long lines quickly formed at check-in counters as passengers fumbled through their phones and printed-out documents, though there were no major delays.

“Goodness, I feel so nervous,” said Bernadette Sumners, 56, from Stratford-on-Avon, England, who was taking her first flight since the start of the pandemic to visit her daughter in Oregon and her son in New York.

“There are so many things to remember and organize,” she said as she sat on a bench in the departure terminal, refreshing her email feed every few minutes as she waited for her negative coronavirus test result. “It’s very stressful, but I know it’s going to be worth it when I see my children and meet my grandchildren,” she said, her eyes welling up with tears.

Reyna Martinez, from Ensenada, in Mexico, crossed the border from Tijuana into California with her daughter for the first time in two years. She said she used to cross at least four times a year to see friends or go shopping. On Monday she was on her way to Long Beach, California, to visit a friend. “Who knows if they might close it again,” she said, speaking in Spanish. “I was worried if I didn’t go now, I might miss out. So here we are.

In Canada, Judy and Wayne Peters were packing up their cobalt gray BMW for their 1,520-mile journey south from Kelowna, British Columbia. They own a manufactured home in an upscale recreational vehicle park in Yuma, Arizona, a city halfway between Phoenix and San Diego.

Hundreds of thousands of Canadian “snowbirds,” typically retirees, flock to the U.S. each year to spend the winter.

Now that pandemic travel restrictions have been lifted, thousands are already on their way to Florida, Arizona and California, among other warm destinations, with campers and boats in tow.

“It was a mild winter here, so that worked out in our favor,” said Wayne Peters, 69. “But we are looking forward to being in a nice warm environment again, with our American friends.”

Asian countries, Switzerland at risk in US Treasury’s currency report

England’s Jofra Archer closer to recall after impressing in nets

Say What! Chris Brown to land in jail for owning a capuchin monkey without a permit?

Cardi B hands herself in to the police