Thousands of college and school-going students have virtually paralysed normal life in Dhaka after a privately-owned bus ran over a group of students on July 29, killing two of them.

On Monday the Bangladesh cabinet approved a new law to raise the maximum prison sentence for those causing deaths due to road accidents to five years. This law comes after nine days of demonstrations by thousands of school and college students over the deaths of two teenagers by a speeding bus in Dhaka on July 29.

The protests paralysed the capital, with students blocking streets and only allowing emergency vehicles through. It also resulted in clashes between the protesting students and security forces.

During the protests, an official vehicle carrying the US ambassador to Bangladesh, Marcia Bernicat, was attacked by a group of unidentified armed men on Saturday. Social activist and award-winning photographer Shahidul Alam was detained for alleged “provocative comments” made in media interviews about the protests.

* Why are the students protesting in Bangladesh?

Thousands of college and school-going students have virtually paralysed normal life in Dhaka after a privately-owned bus ran over a group of students on July 29, killing two of them.

Diya Khanam Mim and Abdul Karim Rajib were killed, and 12 others were injured. The driver of the bus allegedly involved in last weekend’s crash has been arrested, but the incident has set off an agitation by students demanding stricter road safety laws.

Bangladesh’s transport sector is widely seen as corrupt, unregulated and dangerous, and the July 29 incident led to an outpouring of anger on the streets.

* What are the demands of the students?

Agitating students had issued nine demands, including capital punishment for those found guilty of irresponsible driving. During the past week, students have reportedly started enforcing traffic laws, stopping drivers in the streets of Dhaka and checking their licenses. Authorities said more than 300 vehicles have been vandalised since the protests started. Bus companies have taken their vehicles off the road to prevent them from being damaged.

Protesters as young as 13 were seen on Dhaka’s notoriously clogged roadways, checking whether cars and buses had valid licenses and were roadworthy.

“We won’t leave the roads until our demands are met. We want safe roads and safe drivers,” a protester named Al Miran told Dhaka Tribune. On August 2, a traffic sergeant refused to show his driving license, prompting students to seize his motorbike and set it on fire, according to a Dhaka Tribune report. 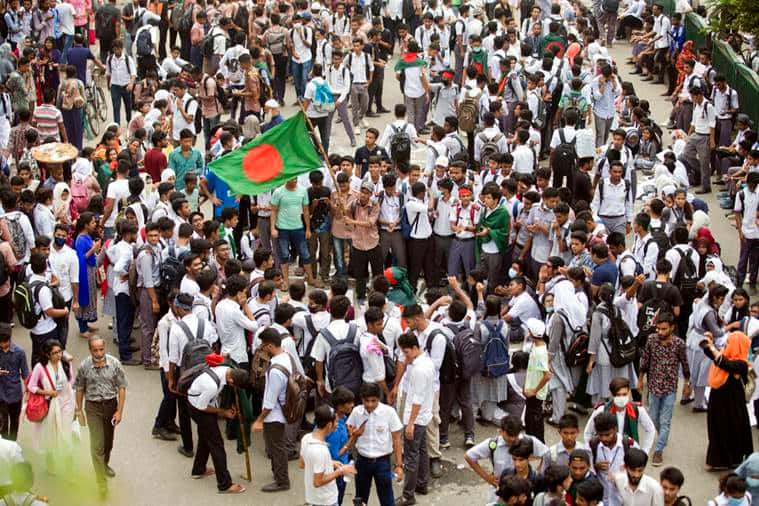 Sheikh Shafi, a student of a polytechnic institute in Dhaka who lost his brother in a road accident in 2015, said one of the problems with buses was that bus drivers are not paid fixed monthly salaries and instead earn commissions based on the number of passengers they transport, forcing them to work long hours.

“Our demand is that the owners must appoint them and they will work a maximum of 10 hours. The commission-based system must be eliminated,” Shafi told Reuters.

Alam told Al Jazeera on Sunday the demonstrators were driven by “larger” factors than just road safety, highlighting “the looting of the banks, the gaggling of the media, the extrajudicial killings, disappearings, bribery and corruption”.

At least seven photojournalists who were taking pictures of the protests were allegedly attacked by activists of the Bangladesh Chhatra League, the student unit of the ruling Bangladesh Awami League party.

* What has the draft Road Transport Act 2018 proposed?

Under the proposed law, if a death by road accident is proven to be intentional murder, the offenders will be tried and punished as murder suspects. It has now been made a non-bailable offence, whereas it was bailable earlier.

Climate-related disasters on the uptick

21 killed as bus plunges into ravine in Indonesia

UK panel fights back ‘misrepresentation’ of its race disparities report