Experts say that the timing of the latest launch is important. But they are unsure if more sanctions are the key to successfully restraining North Korea's aggression. North Korea went ahead with a succession of tests of an allegedly new cruise missile on Saturday and Sunday.

They took place as top officials from South Korea, the US and Japan arrived in Tokyo ahead of discussions with Pyongyang on Tuesday over stalled denuclearization of the Korean Peninsula.

Analysts believe that the timing of the North’s latest show of force is no coincidence.

According to North Korea’s state-run outlet, Korean Central News Agency (KCNA), the secretive country launched a number of advanced missiles during the weekend. They reportedly flew in figure-of-eight or oval flight patterns for around 1,500 kilometers (932 miles) before being guided onto targets.

That range would mean the weapon is capable of hitting targets almost anywhere in South Korea or Japan.

The KCNA declared that the long-range cruise missile is “a strategic weapon of great significance” and has been under development for the past two years. Analysts noted that the tests come just days after a major military parade through Kim Il-sung Square in Pyongyang to mark the 73rd anniversary of the founding of the North Korean state.

The launches follow confirmations last month that operations appear to have resumed at the regime’s Yongbyon nuclear facility that processes fissile material for nuclear warheads.

“But now a trilateral statement is needed that mentions sanctions and defense cooperation, while also calling on North Korea to practice military restraint, resume dialogue and accept humanitarian assistance for alleviating the suffering of its people.”

The test was particularly provocative and merited international sanctions because the cruise weapons were “strategic,” implying an intention to miniaturize nuclear warheads to fit on them, Easley said.

“However, Pyongyang may be calculating that Washington will take a weaker approach [to sanctions], givenstrained US relations with China and Russia and both those countries’ general opposition to increasing sanctions,” he told DW. 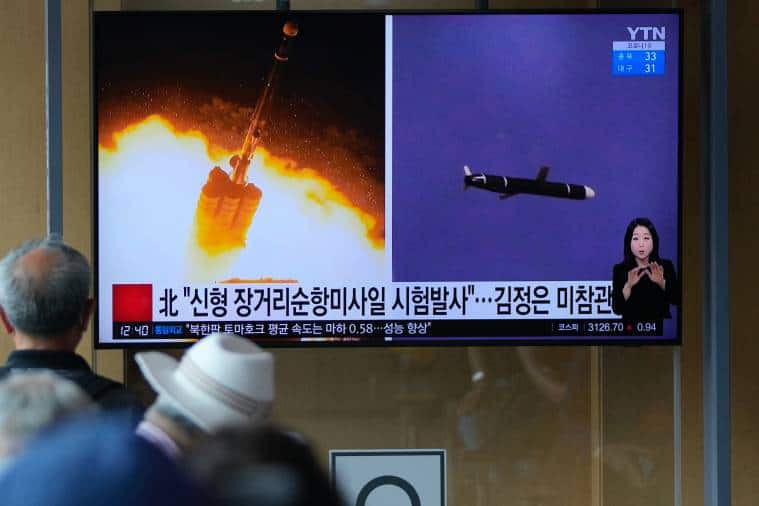 Russia, which also borders the North, has allowed companies to re-export North Korean coal and transship oil and petroleum to other countries in violation of UN sanctions, according to the CFR.

US condemns the launches

The US was quick to condemn the launches. The US Indo-Pacific Command released a statement Monday saying it was continuing to monitor the situation and was consulting with allies and partners throughout the region.

“This activity highlights [North Korea’s] continuing focus on developing its military program and the threats that poses to its neighbors and the international community,” it said. “The US commitment to the defense of the Republic of Korea and Japan remains ironclad.”

Attracting attention from the US

Meanwhile, Rah Jong-yil, a former diplomat and head of the South Korean intelligence department tasked with monitoring North Korea, said the recent activity could be an attempt to attract US attention. He billed it as a “typical reaction” from the North.

“It is certainly something we have seen in the past when they want something,” he added.

“That may be the case, but ultimately what can the rest of the world do now?” asked Rah. “We have been in this situation before, but there is very little in the way of external pressure that can be brought to bear now.”

Rah views the scope of sanctions in curtailing such activities as limited after the North systematically broke promises to decommission its nuclear weapons in exchange for aid or removal of sanctions.

The North has been under gradually more strict sanctions since it conducted its first nuclear test in 2006, yet the regime has continued to survive, Rah said.

Will Mahesh Babu Go On A Farm Holiday Now?

NOT AGAIN! Actor Sivakumar knocks the phone of a fan’s hand as he tries to click a selfie – watch video