Even before the Centers for Disease Control and Prevention recommended this week that vaccinated Americans in coronavirus hot spots around the country go back to wearing face coverings indoors, a resistance had been building against any new masking requirements, no matter the resurgence of infections.

Hours before the CDC’s announcement on Tuesday, the school board in Broward County, Florida, postponed a meeting on back-to-school protection rules after a small crowd of maskless adults and children showed up to the lobby of the school district headquarters and got into a tense exchange with masked members of the local teachers’ union.

In Missouri, where rampant Covid-19 has once again flooded hospitals, St. Louis County reinstated a mask mandate on Monday, ahead of the CDC’s updated advice — only to face a lawsuit hours later from Eric Schmitt, the state’s Republican attorney general, who accused the county of “unacceptable and unconstitutional” overreach.

By Tuesday night, the St. Louis County Council, meeting in a packed chamber where a woman was hoisting a sign that read, “STOP THE TYRANNY,” had voted to overturn the mandate, though the measure’s fate may ultimately be decided by the courts.

“You asked us to stay home,” Rita Heard Days, the council chairwoman, told the director of the county’s Public Health Department before voting to lift the mask mandate. “You asked us to put on masks. You asked us to stay 6 feet apart,” she said. “We have followed your orders, and yet we are still in a predicament. So something is not working.”

The virus has changed, Dr. Faisal Khan, the public health director, told her.

The surging virus, fueled by the more contagious delta variant, has led the CDC to respond with guidance that harked back to a year ago, when many state and local officials were imposing mask mandates. And on Thursday, President Joe Biden is expected to announce that all civilian federal employees must be vaccinated or forced to submit to regular testing, social distancing, mask requirements and travel restrictions.

But after months of shutdowns and with three vaccines available to protect Americans, those trying to get people to wear face coverings again in the middle of a long, hot summer are encountering defiance and hostility.

Four Republican governors — Greg Abbott of Texas, Doug Ducey of Arizona, Brian Kemp of Georgia and Pete Ricketts of Nebraska — signaled their opposition to the recommendation.

The South Carolina Department of Education cited the state’s ban and said its public schools would not adopt the CDC mask recommendations.

“Everybody has access to vaccines in our country at the moment, and so I think that if people are not taking advantage of that, it’s poor personal decision-making,” said state Sen. Mark Mullet, a Democrat.

Gov. Jay Inslee, a Democrat, urged all residents to follow the federal guidelines and announced that mask requirements in schools would remain. He suggested that the state could require vaccinations for eligible students if rates do not increase.

The Illinois Department of Public Health recommended masks for everyone in places with rampant infections, and in California, with more than 90% of the state facing substantial or high transmission rates, state health officials on Wednesday recommended masking in all public indoor settings, though they stopped short of a mandate. 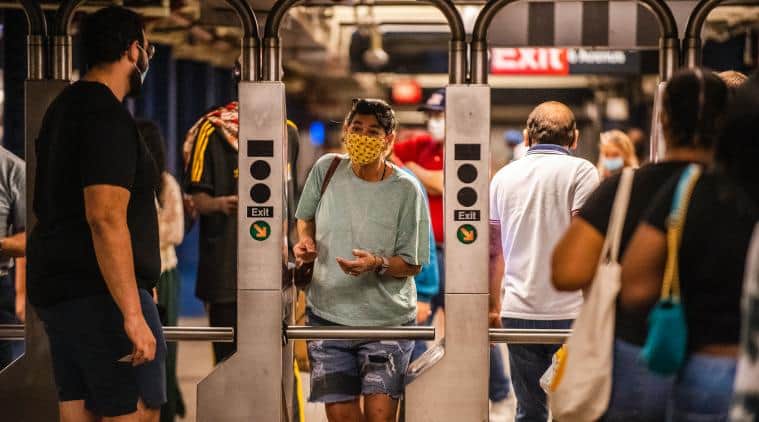 Private companies, too, were moving to impose mask rules. MGM Resorts International said it would require all visitors to wear masks in indoor public areas beginning on Friday. And Apple told employees it was reinstating mask requirement for everyone indoors in certain U.S. offices, according to an internal memo obtained by The New York Times. Apple also announced it would require employees and customers, regardless of vaccination status, to wear masks in about half its U.S. stores.

For other businesses the surge in virus cases has complicated plans for returning workers to their desks. Google said Wednesday that it was pushing back its official return date to Oct. 18 from September — following a similar announcement from Apple — and would require returning workers to be vaccinated.

Los Angeles County was the first major county to revert to requiring everyone to wear masks indoors in public spaces last week.

“It’s an inconvenience and it’s annoying,” said Tina Kim, 40, who sat on the outdoor patio of a Mexican restaurant in the Boyle Heights neighborhood of Los Angeles on Tuesday night. “But I don’t think there is a reliable way of filtering who is vaccinated when you walk into a store. It’s just easier for everyone to put it back on.”

The CDC recommended that people wear masks indoors in counties with substantial or high infection rates, or more than 50 new cases per 100,000 people in a seven-day period. By that measure, all residents of Florida, Arkansas and Louisiana should wear masks indoors. Nearly two-thirds of U.S. counties qualify, many of them concentrated in the South.

The patchwork of regulations has created a confusing landscape where masks are strictly enforced on airplanes, required and mostly worn on public transportation systems like the New York City subway, and left off completely inside supermarkets, movie theaters and gyms in much of the South.

The most effective public health guidelines are those that are simple, clear and applied consistently, said Gretchen Chapman, a professor in the Department of Social and Decision Sciences at Carnegie Mellon University. She said it would help for leaders to set criteria so that people might know, for example, that reaching a certain threshold of infection would trigger measures such as masking.

“When the weather turns cold, people say, ‘Ugh, now I have to bundle up with a scarf and coat every time I have to go out.’ We may complain that the cold weather is back, but that doesn’t stop us from doing it,” Chapman said. “Nobody is going to be happy that you have to wear a mask again, but if we could say, ‘These are the conditions again, it’s time,’ then there would not be a surprise when we get to the mask zone.”

State health departments have found themselves squeezed between a public tired of restrictions and a beleaguered medical establishment desperate to stem the exhausting crush of COVID-19 patients. This is particularly true in conservative-leaning states where politicians and their supporters tend to bash public health measures as an attack on freedom.

In Florida, which never had a statewide mask mandate and has seen a big rise in virus cases and hospitalizations, Gov. Ron DeSantis, a Republican, made no mention of the CDC guidelines at a news conference on Wednesday. (None of the officials present at the outdoor event wore a mask.) Last week, he had reiterated that asking people to cover their faces goes against the message that they needed to get a vaccine.

“I get a little bit frustrated when I see some of these jurisdictions saying, ‘Even if you’re healthy and vaccinated, you must wear a mask because we’re seeing increased cases,’” he said on July 21. “Understand what that message is sending to people who aren’t vaccinated: It’s telling them that the vaccines don’t work. I think that’s the worst message that you can send to people at this time.”

On Wednesday, though, Mayor Daniella Levine Cava announced an indoor mask requirement for all county-operated facilities in Miami-Dade County and a strong recommendation for masks in all large crowds or close spaces. “We have all come too far,” she said. “We have all sacrificed too much in this past almost year-and-a-half. We cannot turn back now.”

Amruta Khanvilkar: I would rather get work on my capabilities than think about others who might be getting it on a platter

Rupee falls 29 paise to 73.64 against U.S. Dollar in opening session