The fates of the two lawmakers, which are expected to be discussed at a private meeting among Republicans on Wednesday, are a proxy battle for the party’s future, prompting a clash among its top leadership. 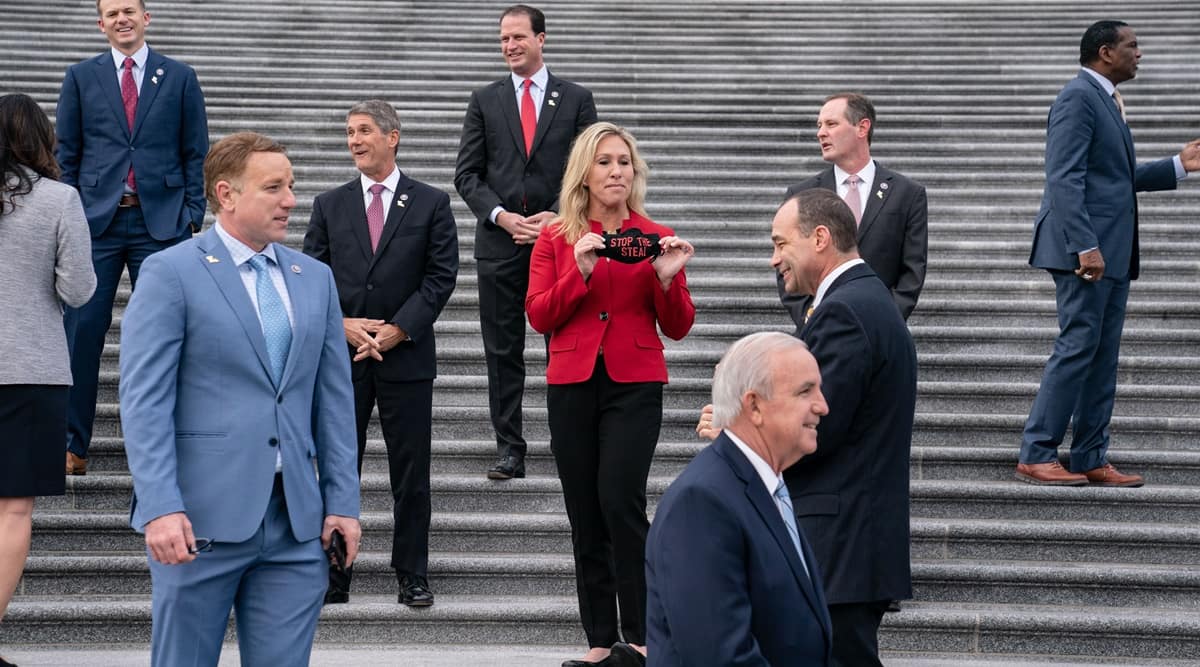 Republicans fighting over their party’s future face a turning point Wednesday as House leaders confront dueling calls to punish two members: one for spreading conspiracy theories and endorsing political violence, and the other for voting to impeach former President Donald Trump.

Trump loyalists want to strip Rep. Liz Cheney of Wyoming, the No. 3 Republican, of her leadership post as payback for her vote to impeach. Trump critics want to strip Rep. Marjorie Taylor Greene of Georgia of her committee assignments for endorsing false claims, bigoted language and violent behavior, including calling for the execution of top Democrats.

The fates of the two lawmakers, which are expected to be discussed at a private meeting among Republicans on Wednesday, are a proxy battle for the party’s future, prompting a clash among its top leadership.

On one side is Trump, who has praised Greene, and a majority of House Republicans who backed the former president after the Capitol riot Jan. 6. On the other are a growing number of Republican senators, including Mitch McConnell of Kentucky, the minority leader, who have rallied behind Cheney.

Caught in the middle is Rep. Kevin McCarthy of California, the House Republican leader, who is under pressure from both sides and who met with Trump in Florida last weekend. At the same time, McConnell, who rarely wades into party disputes in public, inserted himself into the fray by issuing two statements Monday night. One praised Cheney, and the other slammed Greene, without naming her, for “loony lies” that he called a “cancer” on his party.

McConnell’s statements intensified the pressure on McCarthy and underscored the existential crisis in the party. At the very least, McConnell’s decision to take a public stance is the latest evidence that he is convinced that Trump and his brand of politics could destroy the Republican Party. It is a concern borne in large part out of cold political calculation: McConnell lost his Senate majority in January after independent and suburban voters in two runoff races in Georgia spurned what the Republican Party had become under Trump. 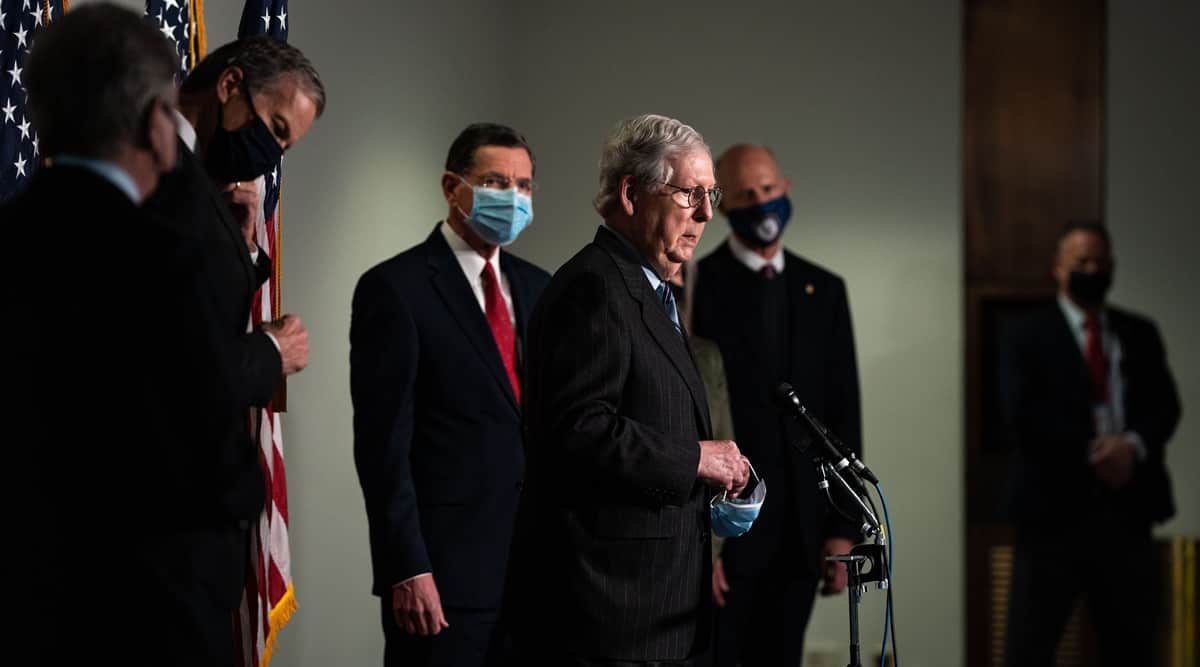 But there is a chasm between McConnell’s political imperatives and those of McCarthy, who must win the House in races where loyalty to Trump has become a prerequisite. In a nod to that reality, he made the trip to Palm Beach, Florida, and has remained silent about Greene.

Sen. John Thune of South Dakota, the No. 2 Republican, backed McConnell on Tuesday, telling CNN that House Republicans would have to “decide who they want to be.”

Senate Republicans are also facing that choice as they look to Trump’s impeachment trial and the decision of whether to convict him on a bipartisan charge of incitement of insurrection. All but five of them, including McConnell, voted last week to dismiss the trial as unconstitutional, a reflection of how reluctant they still are to cross the former president.

Still, a phalanx of Republican senators followed McConnell’s lead Tuesday, inserting themselves into the House turmoil to urge leaders there to reject Greene.

“I think we should have nothing to do with Marjorie Taylor Greene and think we should repudiate the things she said and move away from her,” Sen. Mitt Romney of Utah said. “I think our long history as a party has shown that it’s important for us to separate ourselves from the people that are in the wacky weeds, and if we don’t, then our opposition tries to brand us with their image and their point of view.”

Sen. Bill Cassidy, R-La., told CBS that he agreed with McConnell “entirely,” saying, “We have to move beyond what someone thinks may be true because it is on the internet.”

Sen. Lindsey Graham, R-S.C., took to Twitter to express his support for Cheney, calling her “one of the strongest and most valuable conservative voices in the Republican Party.” But Graham, who was one of Trump’s most loyal allies on Capitol Hill, later told reporters that he was not ready to repudiate Greene, saying he needed to hear more about whether the reports about her comments were “accurate” and whether she still believed what she said.

House Republican leaders have been mum in recent weeks as they have mulled how to deal with Cheney, the daughter of former Vice President Dick Cheney, and Greene, who was elected to her first term in November. Trump is still popular with a majority of their members, who voted to support his bid to overturn his election defeat. Even as some of them privately harbor concerns about his influence on the party, Republicans are keenly aware that the smoothest path to victory in many House districts is by appealing to base voters who revere him.

Underscoring the balancing act, Rep. Andy Biggs, R-Ariz., the chairman of the hard-right Freedom Caucus, issued a warning Tuesday in response to a plan by House Democrats to strip Greene of her committee assignments. Biggs said the Democrats’ effort “to strip Congresswoman Greene of her committee assignments for thoughts and opinions she shared as a private citizen before coming to the U.S. House is unprecedented and unconstitutional. All self-righteous Republicans, beware: If this can happen to Congresswoman Marjorie Taylor Greene, it can happen to any one of us.”

McCarthy has yet to comment on the extensive stream of racist and conspiracy-laden social media posts made by Greene before she came to Congress. A spokesperson said last week that posts in which she endorsed killing Democratic lawmakers were “deeply disturbing” and that the leader planned to address them in a conversation with Greene this week.

McCarthy has taken a marginally less reluctant tone on calls for Cheney to resign from leadership, telling reporters that he supported her but felt it would be appropriate for the conference to discuss the manner in which she announced her support for impeachment.

“Leader McCarthy is in a very tough position, an unenviable position,” said Carlos Curbelo, a Republican former congressman from Florida. “But it’s pretty obvious that he’s trying to find a balance between the long-term interests of the party and his own short-term political interests and those of the members who are serving today.”

Curbelo said that if there were a secret ballot vote to expel Greene from the conference, she would overwhelmingly lose, but that if the vote were public, lawmakers would vote for her to remain in the conference.

“Members know what doing the right thing means, but ultimately a lot of them fear Donald Trump and his base, and that’s why they’re stuck in this vicious cycle,” Curbelo said. “Members will say, ‘A lot of the voters in my district believe these conspiracy theories’ — and a lot of the reason they do is because these members won’t level with them.”

Greene announced over the weekend that she had spoken with Trump and received his support, in what amounted to a veiled threat to Republicans who might be considering taking action against her. To drive home her point, she said Monday that she planned to meet with the former president at Mar-a-Lago, his private club in Florida, “soon.” McCarthy also traveled there last week in an effort to mend a rift with Trump that was caused by the leader’s assertion that the former president bore some responsibility for the attack on the Capitol.

McConnell, in contrast, has repeatedly signaled to his party that he is ready to cut Trump loose, making clear to associates after the Capitol attack that he viewed the former president’s actions around the riot as impeachable and blaming him in a speech from the Senate floor for provoking the mob.

“He’s sending up an urgent warning that we can’t be a national governing party, we can’t be a majority party, we can’t even be competitive if we’re going to be the party of Jewish space lasers, and that 9/11 didn’t happen and all the conspiracy theories” that Greene has endorsed, Scott Jennings, a former top aide to McConnell, said on CNN.

Jennings said that warning extended to attempts to force Cheney out of her leadership role.

“If what comes out of this entire Jan. 6 ordeal is that Liz Cheney is the only person who winds up punished,” he said, “it would be an absolute travesty.”

Why the city of dreams is a landscape, character, emotion and more in Sooni Taraporevala’s films

‘We are still making good and bad films’