That appeal was echoed in a statement to the committee later from 52 mainly European countries and the European Union. 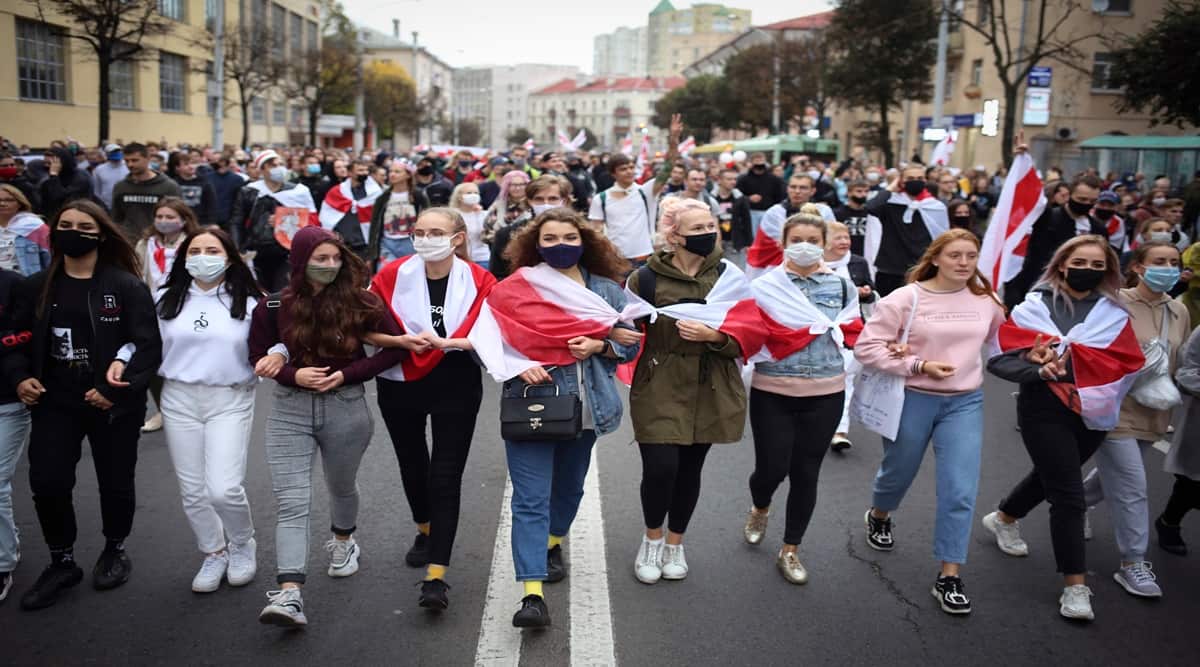 The UN human rights investigator for Belarus demanded Monday that the government “stop repressing its own people,” saying at least 20,000 were detained in August and September and hundreds reported beaten, intimidated, tortured or ill-treated in custody.

Anais Marin quoted sources in the Interior Ministry and non-governmental groups for those figures and said most detainees have ended up facing administrative or criminal charges, citing over 400 criminal cases against protesters since disputed elections August 9.

That appeal was echoed in a statement to the committee later from 52 mainly European countries and the European Union.

They also called for an end to violence against peaceful demonstrators, abuses against those in the pro-democracy movement, and intimidation of opposition leaders, journalists, human rights defenders and protesters.

Belarus has been rocked by big demonstrations against authoritarian President Alexander Lukashenko”s re-election to a sixth term in the August 9 vote that the opposition argues was rigged.

Lukashenko, who has ruled the ex-Soviet nation with an iron fist for more than 26 years, has accused the United States and its allies of fueling the protests.

Sunday”s rally in the capital Minsk was one of the largest in weeks and drew nearly 200,000 people. On Monday, factory workers, students and business owners began a strike to demand that Lukashenko resign in response to a call by opposition leader Sviatlana Tsikhanouskaya, but most state-run enterprises continued to operate.

Marin urged Belarus” authorities to release all those still detained “for exercising their right to peaceful assembly and expression, and to allow all those forced to exile to safely return” so a dialogue with all representatives of civil society can be held “to jointly overcome the current political crisis.”

Dave Elseroad, head of advocacy at the Oslo-based Human Rights House Foundation, said, “Autocrats all over the region are watching to see if it”s possible to get away with violating human rights to stay in power.”

In a report written before the election, Marin was highly critical of Belarus” judicial system, which gives Lukashenko power over the appointment, tenure and removal of judges and prosecutors.

She said licensing and activities of lawyers are also “tightly controlled by the executive.”

“The threat of being disbarred is used to arbitrarily pressure those lawyers who are perceived as being critical of the government because of the type of clients they defend,” Marin said.

“This often leaves human rights defenders without a lawyer to defend them in court.”

She cited the example of Aliaksandr Pylchenka, a lawyer who was defending detained opposition leaders Viktar Babaryka and Marya Kalensnikava and had his license withdrawn October 15.

The United States and the EU have rejected the August election as neither free nor fair and introduced sanctions against top Belarusian officials accused of vote manipulation and a crackdown on peaceful protesters.

The EU has warned it is ready to sanction Lukashenko himself if he fails to enter talks with the opposition. The president has ignored demands to negotiate and relied instead on political and economic support from Russia, his main ally and sponsor.

The statement from the 52 countries and EU supported “the democratic aspirations of the Belarusian people to choose their own path through free and fair elections” and strongly condemned the “crackdown carried out by Belarusian authorities against peaceful protesters.”

The statement, read by Estonia”s UN ambassador, Sven Jurgenson, expressed alarm at reports of “more than 500 cases of torture and other severe abuses including sexual violence in the post-election period” and at a number of arrested or detained people who remain unaccounted for.

The signatories — also including the US, Canada, Japan, Liberia, South Korea, Brazil, Chile, Australia and New Zealand — urged Belarusian authorities to open a dialogue with opposition leaders and civil society.

“The Belarusian people have spoken and we support them in their calls for unrestricted dialogue, free and fair elections, accountability for human rights violations and buses and the release of all those arbitrarily detained,” the statement said.

Explained Ideas: Why it may be a long winter for the Indian economy

How this general taught Pakistan a lesson
Last News

Explained Ideas: Why it may be a long winter for the Indian economy