In a series of photos of Putin on a weekend jaunt to the snowy Siberian taiga, the 68-year-old president is shown in his usual favorite outdoor setting, displaying his connection to nature, manly toughness and appreciation of country. 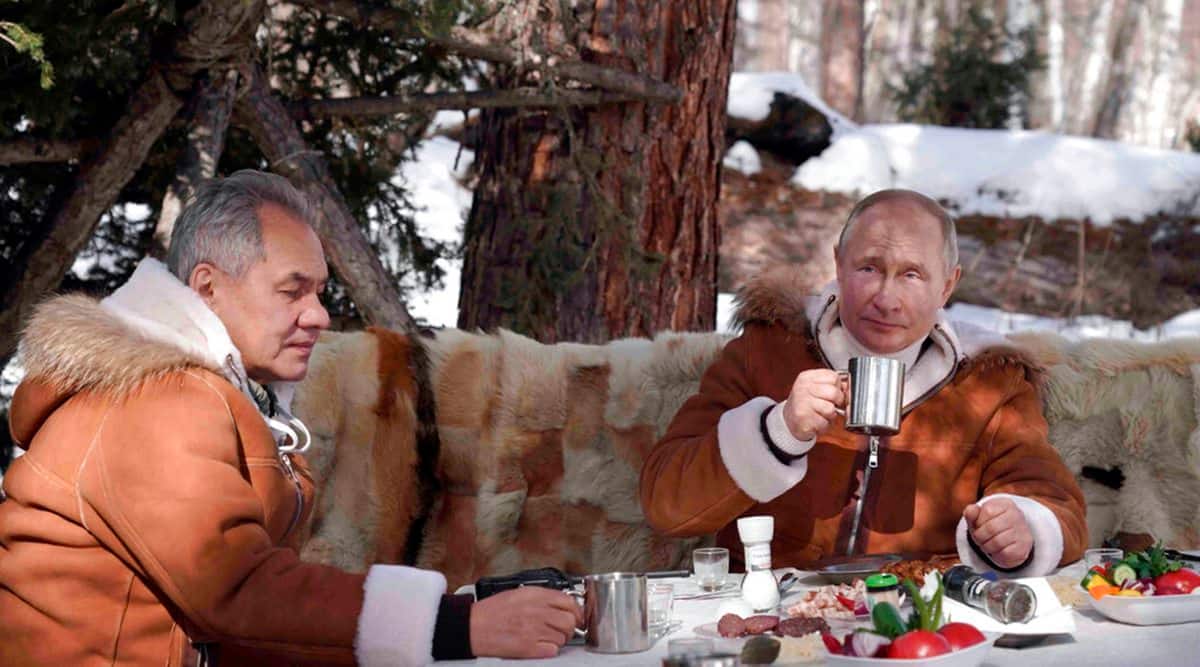 Cue, for example, his latest propaganda foray, released by the Kremlin, as bilateral relations with the United States turn frosty, and with Russian opposition leader Alexei Navalny’s description of Putin as “Vladimir, the Poisoner of Underpants” still reverberating through the air.

In a series of photos of Putin on a weekend jaunt to the snowy Siberian taiga, the 68-year-old president is shown in his usual favorite outdoor setting, displaying his connection to nature, manly toughness and appreciation of country. In the vastness of the largely empty landscape, he looms large. At least that was probably the idea. 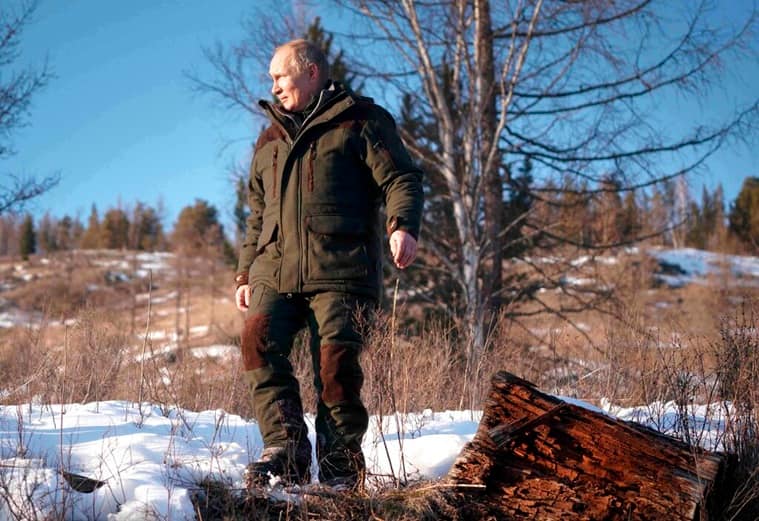 He is, to be specific, caught — as if by chance! — looking serious and steely behind the wheel of a camo-covered all-terrain vehicle so giant it seems nothing could stop it; posing knee-deep in a snowy drift while wearing a plush-yet-cozy sheepskin jacket, matching pants and ivory turtleneck and looking piercingly toward the future; calmly navigating a rickety bridge over a frozen river with his defense minister, Sergei Shoygu, trailing behind; and then enjoying a bracing outdoor picnic of sausages and crudités with Shoygu (who is wearing a matching outfit) at a table covered in a white cloth, fur blankets tossed over the benches and metal mugs raised in harmony. 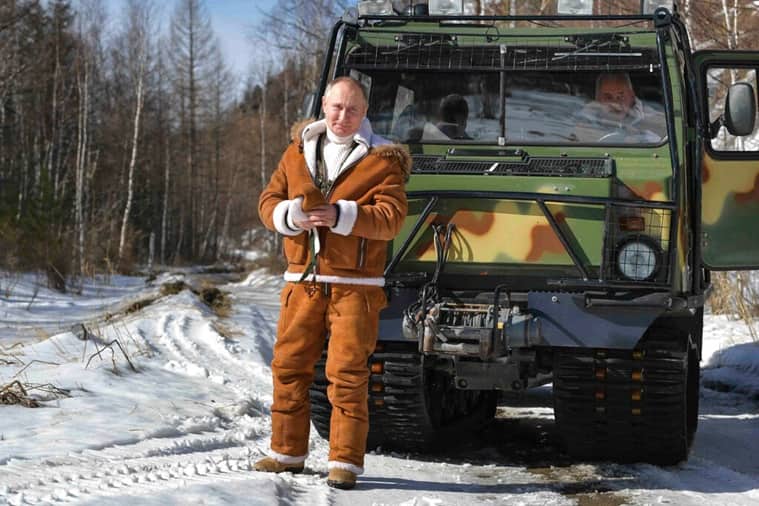 Most political leaders favor sanctioned pictures of themselves looking serious and hard at work in the office. President Barack Obama, for example, often posed behind his desk and with sleeves rolled up. President Emmanuel Macron of France famously released a “making of” video about his official portrait, depicting himself carefully arranging various symbolic accessories on his desk.

But Putin has always opted for a different approach. One that emphasizes the physical over namby-pamby paper-pushing, and speaks to old stereotypes of virility, strength and machismo. Not to mention good health. The kind that allows you to stay in office for a long time.

It has become a sort of absurdist art form unto itself. He was pictured, for example, in a similar sheepskin outfit in 2010 — though without the matching fur hat and mittens — riding through the Siberian snow on horseback, and on a trip to the Russian Arctic, hugging a polar bear. He has ridden a motorbike in black leather (a photo that was so popular, a British company, Matchless London, named a jacket in his honor), played ice hockey (making many goals) and worked out with the Russian judo team.

This action-man framing reached its apogee in 2017, when Putin was photographed mostly bare chested while hunting, spearfishing and otherwise pursuing manly activities in the Siberian outdoors. Afterward, he was caught basking shirtless in the sun, eyes hidden by black shades.

“How could you not vote for a torso like that?” a Moscow newspaper asked at the time. It probably only seemed like a rhetorical question. 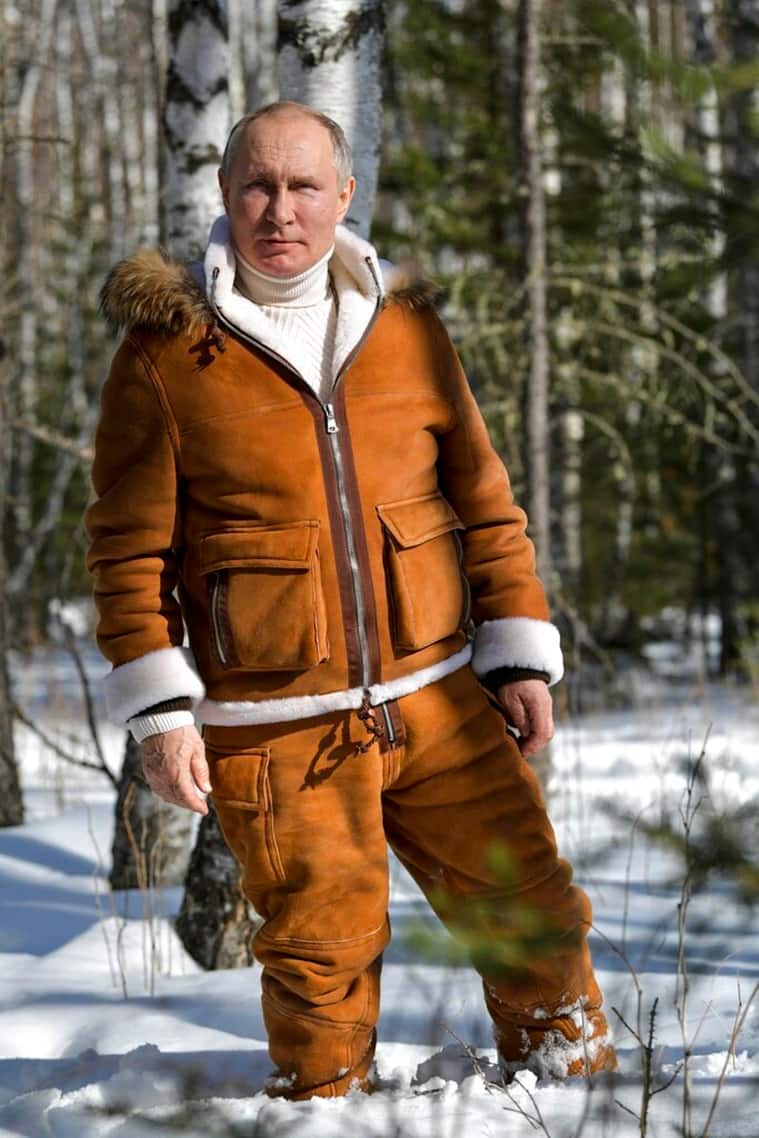 By 2019, Putin had pivoted his image-making to shots that referenced his bond with the earth rather than his dominance of the same, posing while sitting peacefully in a field clutching a bouquet of wildflowers he presumably picked himself, or reclining on a craggy tor. Nevertheless, he remained costumed in shades of olive green and silhouettes that resembled fatigues. The implicit messaging was still tough. It was just more about tough love.

The new Siberia photos are firmly in line with this tradition. If they are not exactly subtle — indeed, the image-making is so obvious, it has inspired a fair share of social media ridicule and memes — it is also true that when it comes to Putin, subtlety has never really been part of the … well, picture.

Bhamashah scheme proves to be life saver for many in Rajasthan