Conservative activist Charlie Kirk warned the convention that a Trump victory was imperative to “ensure that our kids are raised to love America, not taught to hate our beautiful country.” 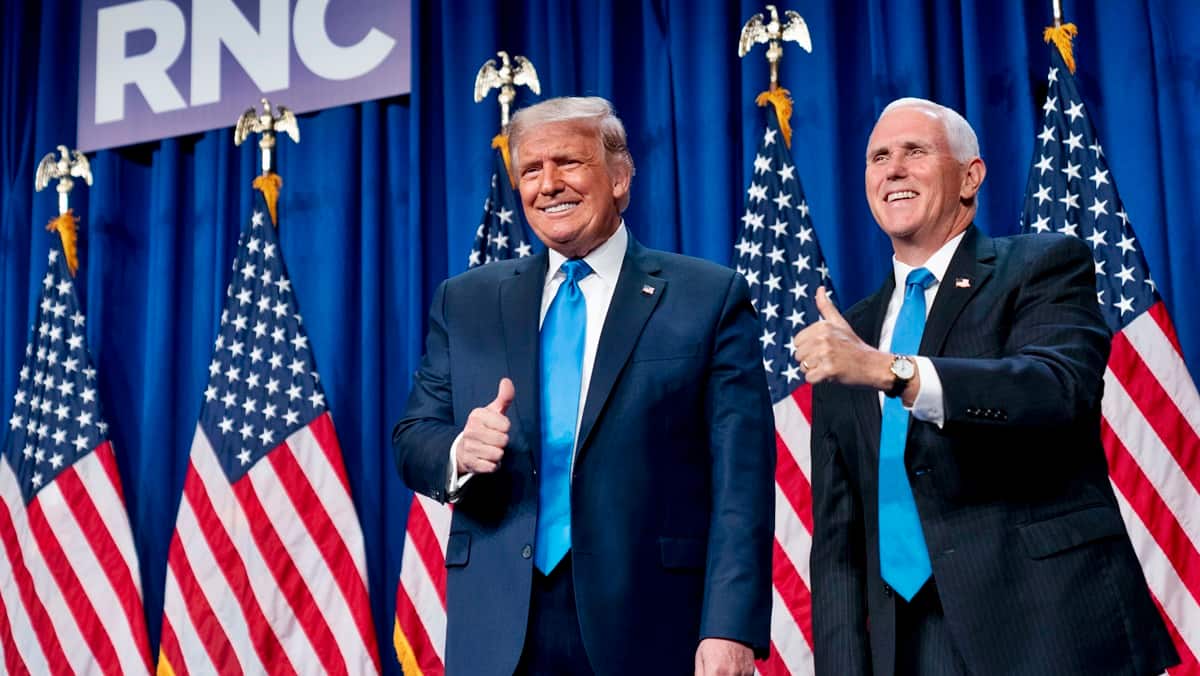 President Donald Trump aggressively asserted control over the Republican National Convention on Monday, overshadowing the prime-time speakers, as he made clear he wants voters to focus on him.

Here are key takeaways from the first night of the convention: AN OMNIPRESENT CONVENTION PRESENCE

Trump. Trump. And more Trump. Never one to shy away from the spotlight, Trump showed he will be omnipresent at the convention, appearing every night and sure to dominate the proceedings.

He made certain he was highly visible Monday with some preliminary appearances and a spasm of tweets. Traditionally, the presidential nominee — including Democrat Joe Biden last week — makes a fleeting convention appearance or two early in the week but largely stays on the sidelines, building anticipation for the acceptance speech on the final night.

Trump has tossed that conventions’ convention aside. He is expected to appear every night, potentially joining First Lady Melania Trump and Vice President Mike Pence at their prime-time speeches.

To Trump, the answer to nearly any crisis is almost always more Trump. Some Republican operatives have expressed private worry that America is suffering from Trump fatigue. But the president is not one to cede the stage.

On Monday, he soaked in gauzy homage from supporters. And he’ll be joined by several others who share his last name: four of his adult children and a daughter-in-law will also speak.

BE AFRAID. BE VERY AFRAID.

But on opening night of their convention, Republicans are doing their share, spreading fear of a Biden victory on Nov. 3. “Make no mistake: No matter where you live, your family will not be safe in the radical Democrats’ America,” Mark and Patricia McCloskey, the St. Louis couple who pointed firearms at Black Lives Matter protesters outside their house in June, were to say.

Conservative activist Charlie Kirk warned the convention that a Trump victory was imperative to “ensure that our kids are raised to love America, not taught to hate our beautiful country.”

Trump, he added, “is the bodyguard of Western civilization.” Tanya Weinreis, a small business owner, warned of “the terrifying prospect of Joe Biden.”

South Carolina Sen. Tim Scott was to argue Democrats are campaigning on a “cultural revolution” for a “fundamentally different America.” The apocalyptic messaging comes as Trump’s campaign strategists are aiming to motivate their own base with dire warnings of a Biden win — and to do their best to depress votes for the Democratic ticket from moderate voters who aren’t sold on Trump either.

VIRUS IN REMISSION AT RNC

The Republican National Convention is a testament to the campaign Trump wishes he could run. For nearly six months, the coronavirus pandemic has upended every aspect of American society and scuttled the type of campaign — full of packed rallies and combustible issues — that Trump wanted to steer.

But the lineup and themes of the convention beginning Monday made mentions of the COVID-19 pandemic only in the context of what were portrayed of Trump’s successes, with scant attention to the more than 175,000 Americans who have died, or the fact that Americans overwhelmingly give the president low marks for his handling of the crisis.

Trump made an appearance at the White House with everyday Americans, without recommended social distancing and with no one wearing a mask.

Kylie Jenner: Why Her Sisters’ ‘Failed’ Relationships Are Making Her ‘Cautious’ Of Marrying Travis Scott

Across the aisle: Want managers, not just watchmen

Chennai water crisis: Here is how Metrowater is being streamlined

This 5-foot-tall telescope made of chocolate is incredible. Watch

This 5-foot-tall telescope made of chocolate is incredible. Watch