Modi, who is visiting the US for the 7th time after assuming office in 2014, said his visit would be an occasion to strengthen the Indo-US Comprehensive Global Strategic Partnership and consolidate ties with Japan and Australia. 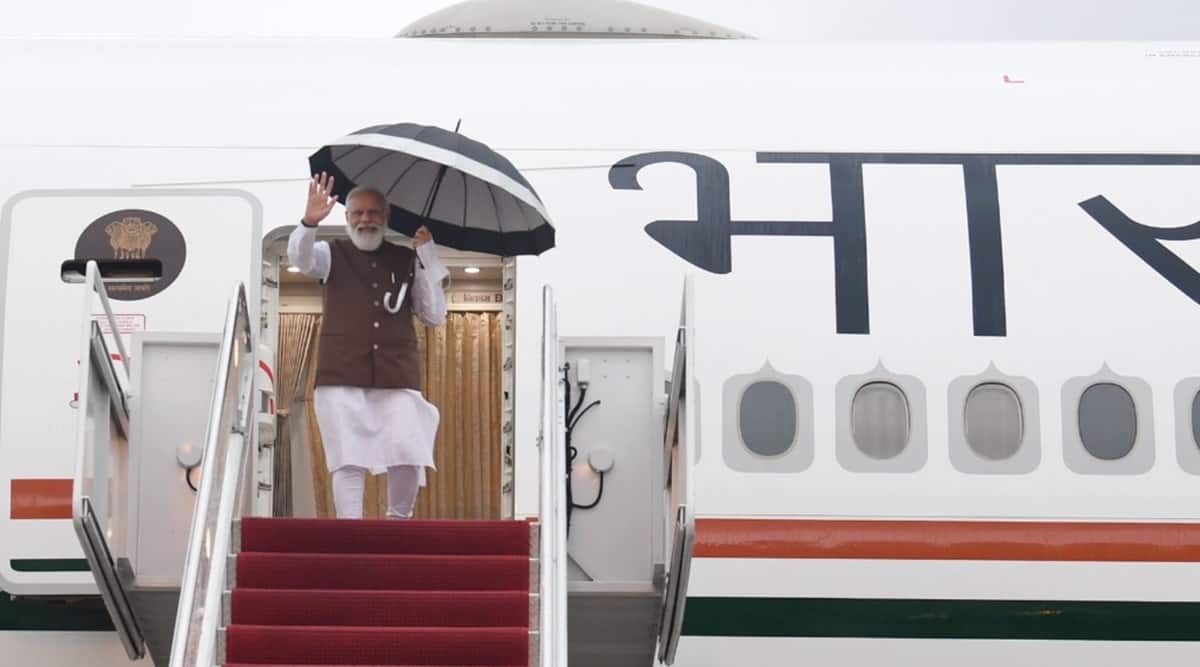 Prime Minister Narendra Modi, who flew to the US at President Biden’s invitation to participate in the first in-person summit of Quad leaders, arrived in Washington on Wednesday. He will also address the 76th session of the UN General Assembly in New York.

Modi, who is visiting the US for the 7th time after assuming office in 2014, said his visit would be an occasion to strengthen the Indo-US Comprehensive Global Strategic Partnership and consolidate ties with Japan and Australia.

PM Modi was received at the airport by senior officials of the Biden Administration and India’s Ambassador to the US, Taranjit Singh Sandhu.

“Landed in Washington DC. Over the next two days, will be meeting @POTUS @JoeBiden and @VP @KamalaHarris, Prime Ministers @ScottMorrisonMP and @sugawitter. Will attend the Quad meeting and would also interact with leading CEOs to highlight economic opportunities in India,” Modi tweeted. 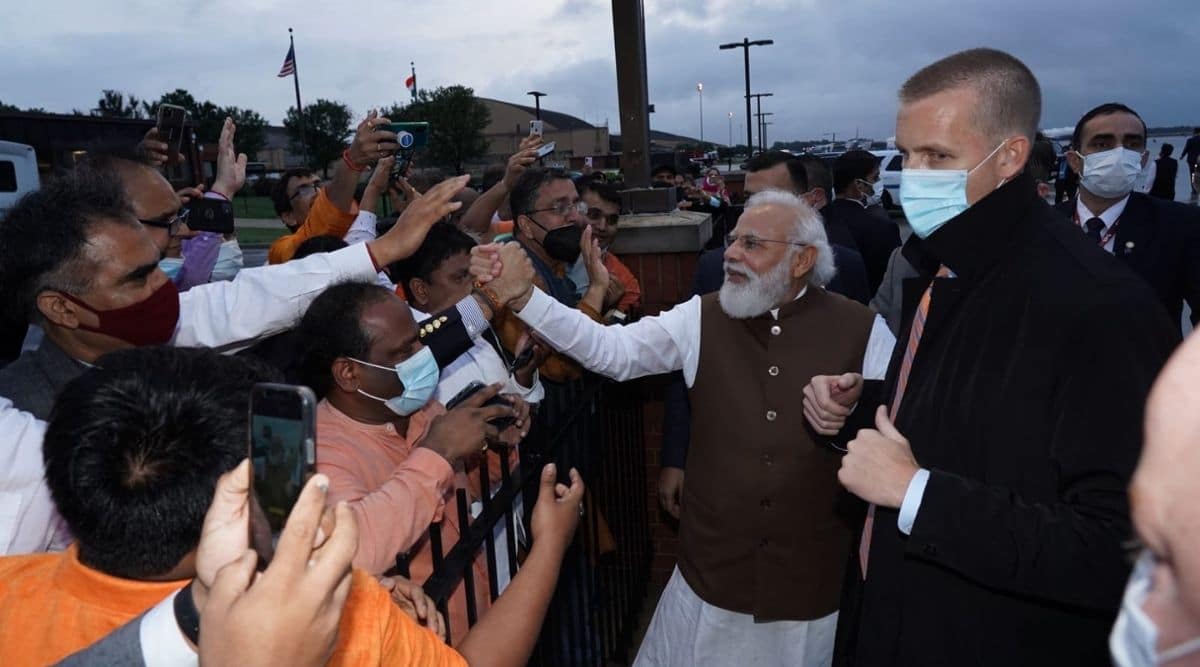 Despite heavy rains since early in the morning, a significant number of Indian Americans were also there at the Andrews Joint Airforce Base to welcome the Prime Minister.

“Exuberant members of the Indian diaspora welcoming PM @narendramodi upon landing in Washington D.C,” Bagchi tweeted along with pictures of Modi interacting with Indian-Americans.

Prime Minister Modi has a packed agenda over the next three days.

Both Biden and Prime Minister Modi have spoken virtually on multiple occasions after the former, a Democrat, became US president in January. The last telephone conversation between them took place on April 26.

During their meeting on September 23, Foreign Secretary Harsh Vardhan Shringla said, the two leaders will review the “robust and multifaceted” India-US bilateral relationship. “They will also discuss how the comprehensive strategic global partnership between our two countries can be enriched further. The two leaders are expected to discuss how to bolster bilateral trade and investment ties, strengthen defence and security collaboration, boost strategic clean energy partnership, explore new avenues in emerging technologies, including through R&D, innovation, and industry linkages.” 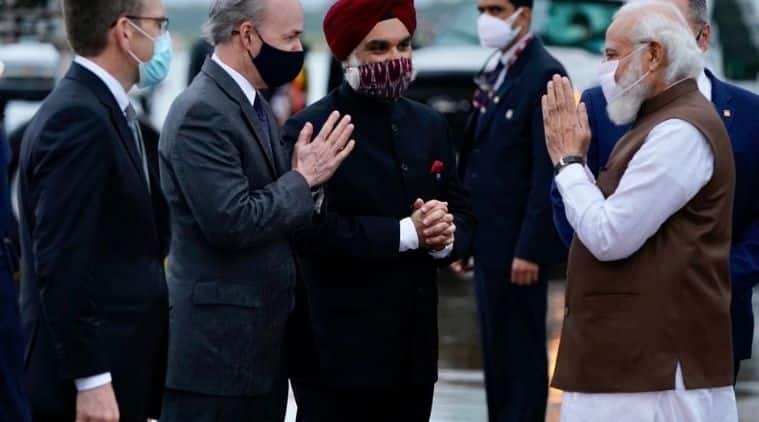 Vice President Harris will meet Prime Minister Modi on September 23. This will be the first meeting between the two leaders. Harris had earlier spoken with Modi over the phone in June during the Covid-19 crisis. Harris is the first woman, the first Black American, and the first South Asian American to be elected Vice President.

Modi will also participate in the first in-person Quad Leaders’ Summit along with President Biden, Prime Minister Scott Morrison of Australia, and Prime Minister Yoshihide Suga of Japan. “The Summit provides an opportunity to take stock of the outcomes of our Virtual Summit in March this year and identify priorities for future engagements based on our shared vision for the Indo-Pacific region,” the PMO said.

Prime Minister Modi will also hold bilateral meetings with Prime Minister Morrison and Prime Minister Suga and take stock of the strong bilateral relations. “My visit to the US would be an occasion to strengthen the Comprehensive Global Strategic Partnership with the USA, consolidate relations with our strategic partners – Japan and Australia – and to take forward our collaboration on important global issues,” he said in his departure statement.

Following his engagements in Washington, Prime Minister Modi will then travel to New York to address the ongoing 76th session of the United Nations General Assembly on September 24. According to the release by the PMO, Modi’s speech at the UNGA will focus on the pressing global challenges including the Covid-19 pandemic, the need to combat terrorism, climate change, and other important issues. 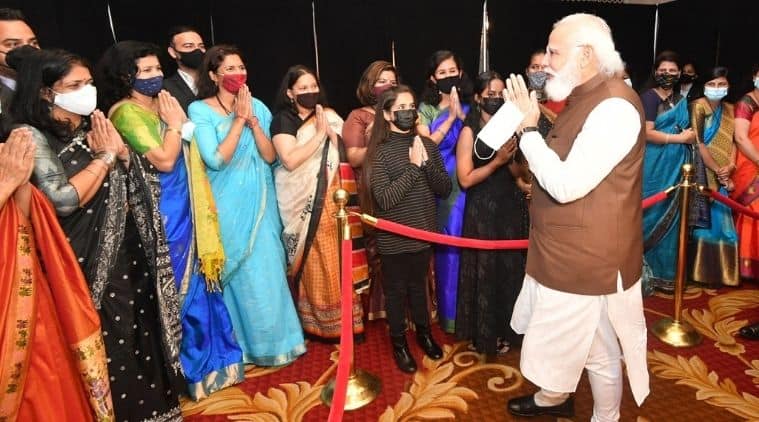 At a media briefing in New Delhi, Foreign Secretary Harsh Vardhan Shringla said on Tuesday that the developments in Afghanistan will be extensively discussed in the bilateral talks between Modi and Biden and the Indian side will convey that Washington needs to continue to focus on that country.

Prime Minister Modi will also hold one-on-one meetings with five top executives from the US. These include Cristiano E Amon from Qualcomm, Shantanu Narayen from Adobe, Mark Widmar from First Solar, Vivek Lall from General Atomics and Stephen A Schwarzman from Blackstone.

All of Prime Minister Modi’s previous visits had his signature massive meetings with the Indian American community in particular the one at the Madison Square Garden in 2015, and thereafter in the Silicon Valley and the last one was Houston in 2019. However, because of Covid-19 restrictions, no large event for the prime minister is being planned.

19 killed in a car bomb explosion near mosque in Syria’s Azaz: Monitor

Everything to Know About the Final Season of 'Supernatural'