The protests began early Sunday afternoon in the Causeway Bay shopping district and quickly turned violent, as demonstrators smashed the windows of a subway station in nearby Wan Chai and threw flaming bottles into it. 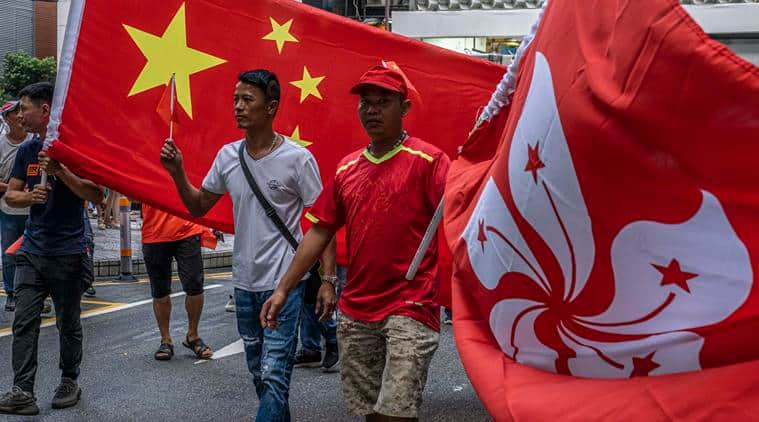 Sunday’s demonstrations were some of the worst unrest in the city since the protest movement began in early June and were timed before China’s National Day anniversary Tuesday. The protesters see the anniversary as a chance to broadcast their resentment of Beijing’s growing influence over life and politics in their semiautonomous Chinese city.

Local authorities, however, are under pressure to tamp down anything that could overshadow China’s official celebrations.

The protests began early Sunday afternoon in the Causeway Bay shopping district and quickly turned violent, as demonstrators smashed the windows of a subway station in nearby Wan Chai and threw flaming bottles into it.

They also set fire to a decorative red sign that celebrated National Day and directed much of their taunting and chanting at the central Chinese government and the Communist Party. Some papered “Anti-ChiNazi” signs on the gates of businesses that they perceived to be pro-Beijing, including Chinese banks.

“Expel the Communist Party, free Hong Kong,” the crowd chanted at one point.

Jason To, 18, a university student who joined a march toward government offices, said he was afraid that if Hong Kong drew closer to mainland China, the city’s residents would lose their right to protest and their free press.

“I’m a Hong Konger, not a mainland Chinese,” To said, speaking through a gas mask. “All of us like China, but we don’t like the Communist Party. Their rule is problematic.”

By nightfall, police had sprayed clouds of tear gas in three busy districts on Hong Kong’s main island and arcs of blue-dyed water from cannons mounted on trucks. Battalions of riot police officers were patrolling the streets of major commercial districts as if they were battlefields, and protesters were setting fires at intersections and the entrances to shuttered subway stations.

In the luxury Admiralty shopping district, police sprayed blue-dyed water at protesters outside the Hong Kong headquarters of the Chinese military. They also pinned protesters to the ground, including one who was bleeding profusely from his skull, near a line of police vans and buses that had rolled up to the site with lights flashing. Two protesters were seen lying unconscious in the street.

As dusk fell, demonstrators in the Wan Chai district continued to toss Molotov cocktails at police while the clanging of bricks on metal street signs — the protesters’ call to arms — echoed through a canyon of tall apartment buildings. Tourists wearing face masks could be seen huddling behind the barricaded plate glass door of their hotel; an older man stepped into the road to yell obscenities at police.

Police fired tear gas and rubber bullets, and the local news media reported that an Indonesian journalist in Wan Chai had been struck in the eye. The South China Morning Post newspaper also reported, citing an unnamed police source, that an undercover officer had fired a live round into the air in the district after a group of protesters attacked the officer and three undercover colleagues.

The Hong Kong government said Sunday evening that 13 people had been hospitalized with injuries. The majority were in stable condition, it said, but one woman was in serious condition and another man’s condition was unknown.

Because none of the demonstrations Sunday had police approval, they were all technically ”illegal assemblies” under Hong Kong law. Police said they used appropriate force to clear the crowds and had deployed tear gas after repeatedly warning protesters to leave.

Sunday’s demonstrations came a day after tens of thousands of protesters rallied to celebrate the fifth anniversary of the start of the Umbrella Movement, a pro-democracy campaign. Earlier Sunday, hundreds of pro-Beijing supporters gathered in a downtown park to sing China’s national anthem.

Human rights activists in various countries had planned dozens of rallies in solidarity with the city’s protest movement Sunday. A five-hour rally, march and concert in the Taiwanese capital, Taipei, drew thousands, the largest public show of support on the self-governing island for this year’s Hong Kong’s protest movement.

Gong Jow-Jiun, a businessman who attended the Taipei event, said he objected to how the local and central Chinese authorities had handled the Hong Kong protests. He said he also worried about people in Taiwan who were working toward the Chinese government’s goal of unification with Taiwan, which the ruling Communist Party claims as its territory but has never controlled.

“A lot of us look to the future and hope that we don’t end up in the same situation as Hong Kong,” Gong said.

Before the Taipei event started, a masked man threw a can of red paint at Denise Ho, a prominent Hong Kong singer and activist who had been speaking to local reporters. Taiwan’s Central News Agency later reported that one of the two men arrested in the incident was a member of a fringe pro-Beijing political party.

The protests in Hong Kong and Taiwan this weekend presented a sharp contrast to the atmosphere in Beijing, where the Communist Party is preparing to celebrate the 70th anniversary of its rule on Tuesday with pomp and pageantry.

President Xi Jinping is scheduled to preside over a military parade involving 15,000 soldiers and sailors, 160 fighter jets and other aircraft, and 580 tanks and other weapons.

The Hong Kong government said Sunday that Carrie Lam, the city’s chief executive, would lead a delegation to Beijing on Monday to join the celebration.