Women now make up about 9% of the US Marine Corps. It’s still a small part of the force compared to other military branches. 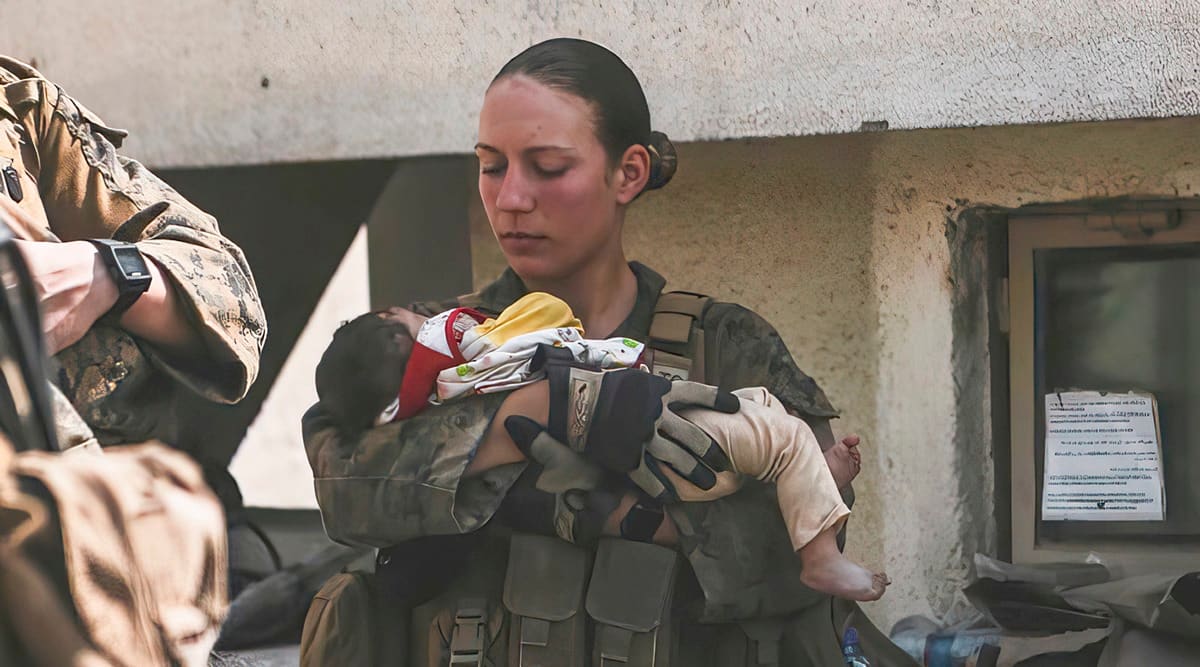 One of the last photos that Marine Sgt. Nicole Gee shared with her family shows her in dusty body armor with a rifle, her long blond hair pulled back, her hands in tactical gloves. Amid the chaos of Kabul, those hands are carefully cradling a baby.

It was a moment captured on the frontlines of the airport, where Marines worked feverishly to shepherd tens of thousands of evacuees through chaotic and dangerous razor wire gates. It showed how even in the tumult, many took time to comfort the families who made it through. In a short message posted with the photo, the sergeant said, “I love my job🤘🏼”

Gee never made it out.

She was one of the 13 troops killed when a suicide bomb ripped through the crowds at the gate this week, killing nearly 200 people. The Defense Department on Saturday officially identified the service members who were killed, and family and friends paid tribute to their lives and their sacrifice.

“She believed in what she was doing, she loved being a Marine,” her brother-in-law, Gabriel Fuoco, said. “She wouldn’t have wanted to be anywhere else.”

Gee, 23, of Roseville, California, was one of two women in uniform killed at the gate. The other was Marine Sgt. Johanny Rosario Pichardo, 25, of Lawrence, Massachusetts. Rosario was commended by her unit in May for excellence in a supply chief job usually given to someone of higher rank.

“Her service was not only crucial to evacuating thousands of women and children, but epitomizes what it means to be a Marine: putting herself in danger for the protection of American values so that others might enjoy them,” Marine 1st Lt. John Coppola said about Rosario in a statement.

The two female sergeants volunteered for a job that in culturally conservative Afghanistan could have been carried out only by women: searching other women and children as they passed through the gates. But the two sergeants were also standout Marines in a force that is slowly changing, putting more women in combat roles and positions of leadership.

For most of military history, women were not allowed in combat. The few admitted to the Marines largely did clerical work. In 2001, at the start of the war in Afghanistan, women Marines were not allowed to be assigned to gate duty, said Kate Germano, a retired Marine lieutenant colonel.

But decades of insurgency wars fought in conservative Muslim countries forced the military to evolve. A conflict with no frontlines often put women in combat, whether it was in their job description or not, and local cultures meant female engagement teams often had to accompany infantry troops on missions to interact with female Afghans.

The Marine Corps slowly, often grudgingly, opened all combat jobs to women. They now make up about 9% of the force. It’s still a small part of the force compared to other military branches, Germano said, “But every year, more women are out front, bearing the burden more equally with men.”

Expanding the rights of women, giving them access to education and work outside the home was for years one of the goals of American efforts in Afghanistan. As the Taliban advanced into Kabul, painting over ads depicting women in western dress and telling women to stay indoors, the nation saw much of that progress crumble. When Marines took over security at the airport gates, two young sergeants found themselves standing on the dividing line between a society opening opportunities for women, and one slamming them shut.

Gee grew up playing softball, never thinking she might one day join the military. But when her high school sweetheart, Jarod Gee, enlisted in the Marines, she decided to follow. They soon married.

Described by her friends and family as vivacious, confident, bright and strong, Gee excelled in the Marines. She graduated from her corporal school at the top of her class and was meritoriously promoted ahead of peers to sergeant in Kuwait, not long before landing in Afghanistan.

Photos from the airport show her walking young girls across the tarmac to a hulking cargo jet and standing guard next to long lines of Afghans walking up the ramp of one of the planes.

She was not intimidated by the demanding, largely male world of the Marines, her family said.

“She was a trailblazer in a sense,” Fuoco said of Gee. “When she did something, she did it all the way, and I really think she enjoyed trying to surpass the men.”

That included in physical feats. She held a base record in her weight class for dead lifting 280 pounds. But, Fuoco said, she was also kind and tender. After this deployment, she talked about starting a family.

Her roommate and fellow Marine, Sgt. Mallory Harrison, said in a Facebook post that for their generation stories of combat deaths often felt like something from the past — tales told by elders about a war that younger Marines had missed. Deployment meant work that was often dull and quiet. Then suddenly combat came ripping back, real and raw.

“Then bad people do bad things, and all of a sudden, the peaceful float you were on turns into you going to Afghanistan & for some, never coming back. It turns into your friends never coming home,” Harrison wrote. “There’s no way to adequately prepare for that feeling. No PowerPoint training, no class from the chaps, nothing. Nothing can prepare you.”

In hometowns and on bases, friends and family gathered to remember the fallen. In multiple states, governors ordered flags lowered to half-staff.

One female Marine who served with Gee said in an interview that her friend was “a beautiful soul and a complete badass.” But the Marine, who asked not to be named because she was not authorized to speak, said her thoughts were not only with her comrades who were killed. “We still have people there, still in danger,” she said. “We also have to think about them.”

In Kabul, a fearful wait for U.S. to deliver on evacuation vow