The top 10 individuals and families, who collectively control almost as much land as lies in West Virginia, include several timber and ranch dynasties plus a few famous billionaires. 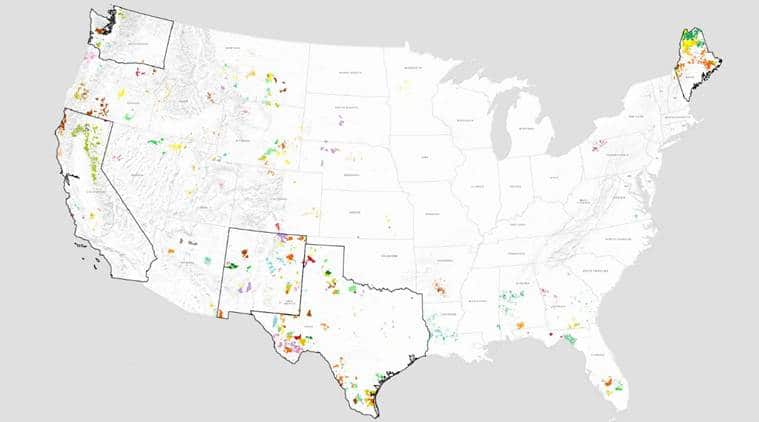 Jeff Bezos spent summers on his grandparents’ ranch in Texas as a kid, learning how to, among other things, castrate cattle.

Today he has his own spread in the Lone Star State, where his company Blue Origin tests its reusable New Shepard rocket. The world’s wealthiest person amassed the 420,000 acres over two decades to become the 26th-largest private landholder in the U.S.

He’s in rich company with a relatively new kind of landed gentry—billionaires including John Malone and Ted Turner—and with families whose ancestors purchased their parts of America generations ago. The 100 largest owners of private property in the U.S., newcomers and old-timers together, have 40 million acres, or approximately 2% of the country’s land mass, according to data from the Land Report and reporting by Bloomberg News. Ten years ago, the top 100 had fewer than 30 million acres.

It may not seem like much—all told, just about the size of Florida. But land is an often-overlooked repository of wealth, one of those quiet assets, such as artworks or trusts, that make up so much of the country’s unexamined riches as inequality widens.

The top 10 individuals and families, who collectively control almost as much land as lies in West Virginia, include several timber and ranch dynasties plus a few famous billionaires.

Media moguls John Malone and Ted Turner hold more than 4 million acres between them in 12 states. Much of it is western ranchland. Turner’s 51,000 bison, which are concentrated near Yellowstone National Park, make up the largest private herd of the animals in the world.

Malone, Subway co-founder Peter Buck and five families have amassed so much forest in Maine that they collectively control a quarter of all the state’s land. Some of the oldest timber holdings trace back well over a century, like the Pingree heirs’ 800,000-plus acres in the North Maine Woods, which are open to the public for camping and hiking.

In the Pacific Northwest, the nation’s second-largest landholder, the Emmerson family, owns 1.96 million acres of timberland that the Bloomberg Billionaires Index values at $4.2 billion. The Reed family is also a major timber landholder in the region.

Ranchland represents 58% of the property owned by the top 100—more than 23 million acres—with the greatest concentration near the Texas-Mexico border. King Ranch, a south Texas institution founded in 1835, is bigger than Rhode Island. More than 400 miles to the north is the country’s largest U.S. ranch behind a single continuous fence, belonging to L.A. Rams co-owner Stan Kroenke.

The Fanjul family’s Florida Crystals business says it is the only organic sugar cane grower in the U.S. Just 3% of the top landowners’ holdings is farmland, with the most in Florida. This includes vast orange groves, with the Collier family as a major producer.

Billionaire hedge fund manager Louis Bacon owns several of America’s most stunning vistas and has conservation easements on much of his land, with more than 90% of it protected. At least 20 of the top 100 have used these legal agreements, requiring them to preserve their properties in return for tax breaks.

Private landholdings can serve as immense playgrounds for their owners. Oil mogul Russell Gordy’s Montana hunting and cattle ranch has a hot springs that was a resort until 1932. The Holding family, the clan behind Sinclair Oil Corp., owns Sunlight Ranch, plus the Sun Valley and Snowbasin resorts.

In pictures: an Onam of resilience in Kerala

Meet the man who got Donald Trump to focus on immigration, and keep at it

Shehzad Deol says it is unfair to not allow an audience vote, Priyanka Chopra speaks on her memoir Unfinished
We and our partners use cookies on this site to improve our service, perform analytics, personalize advertising, measure advertising performance, and remember website preferences.Ok