The storm is expected to bring 1 to 3 inches (3 to 7 centimeters) of rain, a further reduction from earlier forecasts’ estimates. Flash flooding in certain areas is possible, as is minor coastal flooding in the tropical storm warning area stretching north from New York’s Long Island to Rhode Island. 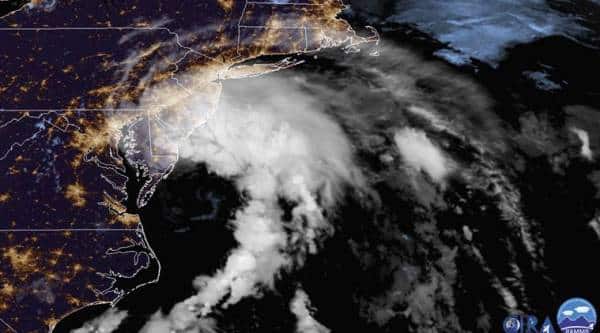 Tropical Storm Fay made landfall in New Jersey on Friday amid heavy, lashing rains that closed beaches and flooded shore town streets, before weakening as it moved over New Jersey.

The storm is expected to bring 1 to 3 inches (3 to 7 centimeters) of rain, a further reduction from earlier forecasts’ estimates. Flash flooding in certain areas is possible, as is minor coastal flooding in the tropical storm warning area stretching north from New York’s Long Island to Rhode Island.

The storm made landfall along the coast of New Jersey about 10 miles (15 kilometers) north-northeast of Atlantic City, according to national forecasters, and the center of the storm was around 15 miles (24 kilometers) northwest of New York City as of the latest advisory.

Several beaches in Delaware had been temporarily closed because of the storm. And police in Ocean City asked drivers to avoid southern parts of the tourist town because flooding had already made some roads impassable. Some streets in the New Jersey shore towns of Sea Isle City and Wildwood were flooded, according to social media posts. Seaside Heights, New Jersey, reported a sustained wind of 37 mph (60 kph) and New York City’s John F. Kennedy International Airport reported a wind gust of 45 mph (72 kph), said forecasters.

Heavy rain was falling in New York City on Friday afternoon as the center of the storm moved northward.

“We expect some pretty heavy winds, and we need people to be ready for that, and some flash flooding in certain parts of the city,” New York City Mayor Bill de Blasio said at a briefing Friday morning.

The summer storm’s impact on the city was expected to be ”pretty limited,” but de Blasio said it would be a bad night for outdoor dining — the only sit-down service allowed at city restaurants because of the pandemic. “If you were going to go out tonight, instead order in and keep helping our restaurant community,” he said.

The shoreline town of Old Saybrook, Connecticut, was preparing to open the local high school as a 2,000-person shelter. In a nod to the coronavirus outbreak, Police Chief Michael Spera they will be handing out masks and will not be sending residents to the gym or other common areas.

He said families will be allowed to stay together in one room. People who indicate they have symptoms that might be associated with the virus will be segregated to a separate area of the school.

President Donald Trump said the storm is being monitored and that the Federal Emergency Management Agency was poised to help if needed. “We’re fully prepared. FEMA’s ready in case it’s bad. Shouldn’t be too bad, but you never know,” Trump told reporters while departing the White House for Florida.

Fay is the earliest sixth-named storm on record, according to Colorado State University hurricane researcher Phil Klotzbach. The previous record was Franklin on July 22, 2005, Klotzbach tweeted.

Two named storms formed before the official June 1 start of the hurricane season. None of this season’s previous five named storms strengthened into hurricanes.

Why there may be no Kerala tableau this R-Day