The ‘been there, seen that’ feeling is so strong with Ved that it punctures any possibility of a compelling watch, Mayur Sanap tells us.

The subject of star-crossed lovers and the theme of ‘love conquers all’ has been dealt with so frequently in films, television and literature that you may wonder what more there is to say about the topic.

If Riteish Deshmukh’s directorial debut Ved is any example, the answer is: Not much.

Joining the remake bandwagon, Ved (meaning insanity) is the Marathi adaptation of 2019’s Telugu film Majili, staring then couple Naga Chaitanya and Samantha. It paints the story about doomed love and what it means to love unconditionally.

The original film was largely an intense marital drama which became quite a rage in Tollywood, thanks to the immense fandom of the lead actors.

The charming pair of Riteish and Genelia has the same magnetic pull among the masses, so perhaps the idea of rehashing the hit formula was a great proposition for them (Genelia also serves as the film’s producer).

But the ‘been there, seen that’ feeling is so strong with this Marathi film that it punctures any possibility of a compelling watch.

The story of Ved revolves around Satya (Riteish), an alcoholic and failed cricketer, who is a reason of constant worry to his docile wife Shravani (Genelia) and a burden on his frail father Dinkar (Ashok Saraf).

While the people around him are doing every bit to help Satya, he has been on a dangerous downward spiral for years due to an emotional void left by the love of his life, Nisha (Jiya Shankar).

Ved is essentially a tale of two halves.

The first half is largely about the meet-cute and blossoming of young romance between Satya and Nisha.

A generic setting of hate-turns-love and its imminent obstacles forms the initial proceedings until it abruptly shifts gears to a more serious and dramatic marital story.

The writing by Rushikesh Turai, Sandeep Patil and Riteish himself uses many convenient plot tools to bring the narrative forward.

As a director, Riteish makes sure not to make things too gloomy and keeps the narrative as light-hearted as possible.

The soothing music by Ajay-Atul is the beating heart of the film with Besuri being the real standout.

Riteish uses this song to form the beautiful montage that offers a good perspective on the backstory of Genelia’s character. There is a touch of humour which prevents the audience from tipping over to the point where it all feels like an overdose.

The very competent Ashok Saraf tries to carry these scenes with a great zeal.

Riteish channels his inner Kabir Singh/Arjun Reddy to showcase the rage and angst of a lost Satya and he is especially good in these scenes.

From grief and anger, to frustration and cynicism, Riteish expresses a gamut of emotions in a fine performance. The biggest draw is seeing him and Genelia interact and despite their strangely hammy Marathi, they benefit a lot from their innately charming chemistry.

Of course, the big intrigue here is Genelia. She has a luminous presence and conveys more with her expressions than dialogues.

She plays a woman who is so obsessed with her unrequited teenage love that she just can’t see life pragmatically.

Her Shravani is a meek, quiet wife stereotype who does not have any agency of her own.

She whimpers when hurt by her husband’s heedless actions.

She has taken upon herself to support her husband, who is nothing more than a wimp but we see no efforts from her to instill any sense into him.

Isn’t the reason why she got into the marriage was to see him do better?

If she really was so selfless, what prompts her to change her mind towards the end?

One is left longing for a greater insight into why and how their relationship has reached to this point.

It also does not help that the film emits a sense of extreme familiarity.

A wrecked love story due to girl’s stern father.

A jilted lover as the hero.

A menacing baddie bitter about the hero.

A loyal friend who exists only to support the hero.

We have seen these conventions, these characters, and these subplots many times before.

There’s nothing new to surprise us here.

It bothers even more when the film appears to be complacent in its sappy melodrama confinement.

It attempts to heighten the emotional stakes for central drama towards the climax, but it is too late by then.

The film sparkles only in sporadic moments due to the allure of its lead pair, but at large, it remains a middling affair. 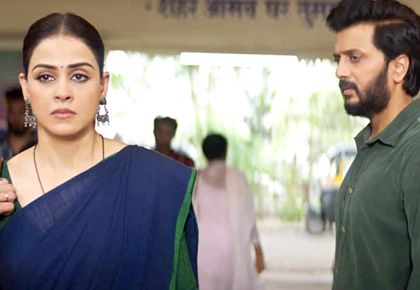 Sivamani on Atkan Chatkan: Took the opportunity to show the world my sound

The emperor of oleander blossoms