‘I cannot stay a moment without cracking jokes.’

Paran Bandopadhyay is a legend when it comes to Bengali cinema and theatre.

Having been in the field of acting for almost 50 years, his stint in films came quite late in life.

It was only after he retired from his government job at the age of 60 that he began working in the film industry full time.

Audiences outside West Bengal caught a glimpse of his terrific acting in Bob Biswas, where he plays the mysterious Kalida, a character which has attained immense popularity despite short screen time.

In a candid chat with Rediff.com Contributor PS Aaryan Khanna, Paranda, as he is fondly called, says, “I thought about the character in as many ways as possible.”

Had you seen Sujoy Ghosh’s Kahaani? Were you familiar with the character of Bob Biswas?

Is there a difference between the mindsets of Sujoy Ghosh and his daughter Diya Annapurna Ghosh, who directed Bob Biswas?

No one will be able to understand the difference in mindsets.

Diya is very calm and intelligent. Because Sujoy is so experienced, she somewhat depends on him a bit.

However, she would communicate her thought process to her father and to us very well.

Even though Sujoy is the writer of the story, she has had a huge impact on the story.

This is your first project after the pandemic, right?

The fun fact is that after the lockdown, when we were revising the script, I did not take up any work.

I thought about the character in as many ways as possible.

I called up experienced people and discussed the many aspects of the character with them.

During the lockdown, I got several offers, but I did not take them up.

When I saw myself acting after the four months of lockdown, I could feel my love for acting and my strong urge to come back to the sets. What made you take up acting after your retirement from your government job?

I have been into acting for a very long time.

I used to act in theatre.

I started acting at the age of 14.

But back then, I was just acting for the sake of it without actually understanding it.

When I entered my professional life, I learned several new things, and gained experience and age.

Then I realised that I had been doing something that I did not love all those years. So I started acting along with my job.

When I actually understood the art of acting and realised its importance in society, how it connected people to society, and that an actor needs to understand society in order to understand his character, I decided I wanted to do this for the rest of my life.

I always had the habit of observing people and imitating them but it was quite later when I realised that observation is actually a part of acting.

After a certain point of time, I felt that it was better to I leave my job and focus completely on acting.

I never thought I would be a part of the film industry.

I was given a chance to act in a film after (Bengali Director) Ajit Ganguly heard my content on the radio.

That was the beginning of my acting career in the industry and it is still going on.

You are known for your comedy. In real life, are you funny or serious?

I feel I am a very jolly person. People around me can answer this question better.

I cannot stay a moment without cracking jokes or talking about humorous things.

I believe there is no such thing as a comedian.

A person who is capable of making people laugh is called a comedian as a gesture of love for him or her.

For instance, when Bhanuda (Bengali actor Bhanu Bandopadhyay) is called a comedian by people, it is because of the love they have for him.

But he is a very versatile actor because he has also played roles that bring tears to your eyes.

You are 81, but so youthful. What is your secret?

There is no secret.

Till the day I die, I would like to spread joy, love and happiness and that in turn also keeps me, my mind and body happy.

I believe it is my responsibility to live my life in the best way possible way, leaving negative thoughts aside. 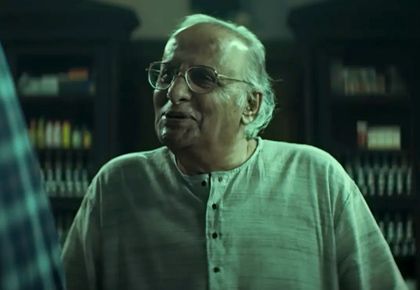 ‘We dance for a cause’

Rajinikanth aces survival challenges in this new Into the Wild clip

NeNe Leakes Slams Lisa Vanderpump: ‘She Did Some Real Foul’ Stuff To Me