Ships of the Northern Fleet isn’t real. It’s fabricated. Fake. A nonexistent TV series. Its fan base, however, very much exists. “Fleeters,” as they’re known, congregate on Discord and TikTok to talk about their favorite “memories” of the adventures of the ship crews of the Four Fleets. 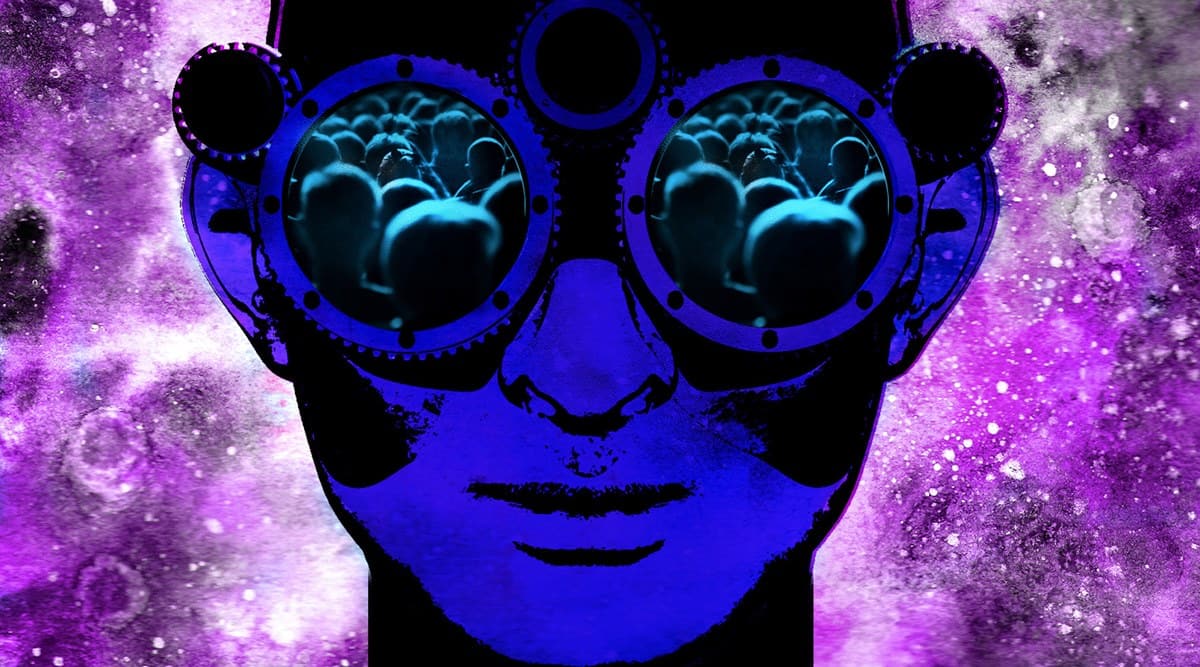 In early April, the cast and crew of “Ships of the Northern Fleet” were reminiscing at a virtual convention.

Catie Osborn, who played fan favorite Annie, recalled the time that one of the show’s guest stars, Dame Judi Dench, was nearly taken out by a laser-beam arrow.

“I remember she was just sitting there, and she was looking over her script, and we just hear that pew pew,” Osborn said. “She didn’t even look up from her script — just caught the arrow midair and went back to reading her ‘King Lear.’ ”

Osborn’s fellow cast members nodded along as she spoke, adding their own memories of that moment.

Maybe you remember it, too — but it’s much more likely that you don’t. That’s because “Ships of the Northern Fleet” isn’t real. It’s fabricated. Fake. A nonexistent TV series.

Its fan base, however, very much exists. “Fleeters,” as they’re known, congregate on Discord and TikTok to talk about their favorite “memories” of the adventures of the ship crews of the Four Fleets. Popular discussion topics include the Cog Hogs, small clockwork hedgehogs that are cuter than the Porgs of “Star Wars” fame, and the majestic Sky Whales, giant beasts who flew in the sky next to the pirates’ soaring airships.

Fans debate the merits of the ships’ various captains, including Captain Neil Barnabus (the leader of the True Winds fleet, named after the fantasy writer Neil Gaiman) and Captain George Hellman (who is “played” by Nathan Fillion, a fixture of the sci-fi genre; he wrote in an email that though he hadn’t heard of the show, he is “all for it”).

So, how exactly did “Ships of the Northern Fleet” come into semi-existence? It started, like so many other dramatic arcs online, with a throwaway post on social media.

A Show Is Born

In early February, in a video on TikTok, video game writer Tyler James Nicol encouraged his viewers to “participate in a hallucinatory experience” by sharing their favorite memories and moments from a show “that will and has never existed,” and that, according to the proposed imaginary construct, had been canceled before its time.

The fake “steampunk sky pirate show,” would be called “Ships of the Northern Fleet” after the name of a novel that Nicol, 36, had once planned to write.

He never got around to the manuscript, but he did have the title, a TikTok account and an idea to crowdsource its plot and fictional lore.

It took off quickly. Nicol, Osborn and four others — Patrick Loller, Erik Tait, Gary Hampton and Logan South — connected on TikTok and started streaming together on Twitch, where they performed improv in character, riffing on questions fans asked them via chat about “working” on the show.

Enthusiasts banded together to create a subreddit, a Discord server and a wiki with more than 300 entries. They’ve also produced fan art, songs and a “Ships” tabletop game. There’s knockoff merchandise out there, too, though fans can buy “real” merch from Nicol; he donates all his earnings from those sales to the Trevor Project.

Timing seems to have been key to the rise of “Ships.” “I feel like the pandemic definitely gave people more time with their phones in their hand just searching for content,” said South, who played the vampiric Necronaut Captain Vlad on the show. To him, the entire project was result of people “really wanting something to fill that time, fill that void, make them feel good.”

The “Ships” fandom also created a refuge for people who’d felt betrayed by the creators of other franchises they loved; fans of “Harry Potter” and “Buffy the Vampire Slayer” have qualified their admiration for “Ships” in light of recent revelations about the makers of those fictional worlds.

It’s a problem that couldn’t haunt an imaginary show with an endless number of authors. “You could be sure if you said there was a character that represented you perfectly, you wouldn’t have to worry about, a year later, finding out that the person who wrote about it actually didn’t acknowledge you as a person,” Nicol said, referring obliquely to J.K. Rowling’s views on transgender people.

Drea Letamendi, a clinical psychologist at UCLA and a host of a pop culture podcast called “The Arkham Sessions,” agreed that the growth of the “Ships” fandom could be a response to upheaval within fan communities. “We’ve been hurt by people who create stories for us, ostensibly ones that are inclusive, ones that we grew up with, ones that helped us form our own identities,” Letamendi said.

“Ships” is inclusive by default; nearly every fan can take credit for some piece of the creative project, and the group has made sure that the ship captains reflect diverse identities within the fandom.

“It was initially cultivated to be an LGBTQ-friendly space and comfortable for people of color,” said Oleander Kiewel, a “Ships” fan who helped build the wiki and created the character Captain Drusilla Spadeworthe, who is pansexual. “It’s really all-inclusive, and no one person is dictating the way that everything flows, and I think that’s quite a wonderful thing for a community. This is the least toxic fandom that I’ve ever been in.”

There is the matter of people “remembering” details from the show differently. For the most part, these memory discrepancies are embraced. “Time is such a flexible idea,” Nicol wrote as one of the Discord group’s rules. “I remember watching the season finale as a young lad. I also was thrilled by last night’s newest episode. Both were accurate.”

Within the fandom, some have referred to this phenomenon as “the Varience,” whereby “a combination of multiverse harmonic string theory and Möbius time loop” are used to explain fans’ wildly different recollections, as the wiki explains.

Letamendi thinks the fact that anyone can create facts within the “Ships” universe is a big part of its draw. “They no longer feel shadowed by being marginalized or minoritized in their experience, and they even get to contribute to what matters,” she said. “I think that has an individual benefit psychologically, but it also has a collective benefit to the culture that’s surrounding this phenomenon.”

Justin Mousseau, 30, a devoted “Ships” fan, agreed. “The appeal of a lot of fandom is that sense of community, of getting to come together and talk about the things we love,” he said. “And I think that ‘Ships of the Northern Fleet’ scratches a really interesting itch in that direction, of getting to create not just fan art for a community or TV show or book, but to shape the direction and the way that the show is.”

This distributed creation is also what makes it unique. “This is how it actually is different than a real fandom,” Letamendi said. “The fans themselves are interpreting and inserting, creating the story with the people who are in power. And that part of it might be incredibly freeing, that part of it might be actualizing fans’ wishes to be a part of the storytelling. They have more control, they are empowered, they feel like they can see themselves in the story.”

“It doesn’t matter if you’re a canon cast member, whatever that means, or an official member of the production crew,” said Tait, a professional magician who is part of the constructed narrative as a special effects supervisor. “There’s no real wrong way to participate in this. It’s fun to read stuff, and it’s fun to watch these things happen, but even asking a question is participating, and participation makes this more fun for everyone.”

The community does practice what Letamendi called “pro-social gatekeeping,” where “Ships” fans redirect those who “remember” problematic aspects of the show.

“A few times Tyler had to come in and be like: ‘Hey guys, we’re remembering a TV show. Maybe we remember the best parts!’ ” said Loller, a cast member who “played” the tentacled character Glurp, whose signature catchphrase — “Swiggity swaggity, let’s blow up gravity!” — has been printed on official franchise T-shirts.

“Some, in the beginning of the fandom, really wanted to treat it like ‘Game of Thrones,’ ” Loller said. “At first they were like, ‘We love it!’ And then they started to take it in this weird direction where they’re like, ‘Actually it was a really problematic show, and it was racist.’ And it doesn’t have to be! That’s the beauty of this.”

Where Does It Go From Here?

What can come from a fandom about a show that doesn’t exist? The answer, like everything else about “Ships of the Northern Fleet,” rests with the fans. One of the other few guidelines Nicol set up in the Discord, however, was that the “Ships” story could never be complete: “There’s always gaps. Always something unfinished,” he wrote. “As though when it comes to write it down there’s room for someone else to add to it, so no ONE story is ever my own.”

The core cast — most of whom didn’t know one another before “Ships” brought them together, and none of whom live in the same area — do have some shared dreams for the show. “Ideally, once people can travel again, if we can do an in-person Q and A table read at an actual event, that’s the top goal for me,” said Hampton, a musician and assistant director for Netflix who “played” young Meadow on the show.

The rest of the cast echoed Hampton’s desire to meet in person. And while most of them agreed that no one should make an actual live-action flying pirate ship series called “Ships of the Northern Fleet,” they also admitted that a show in some other format was intriguing. “I have this fever dream to film a mockumentary while we do that traveling and while we are in the same room,” Hampton said.

“It is my fervent goal to go to a convention in the future and see someone either cosplaying or wearing one of these shirts,” Nicol said, pointing to his “Ships” tee. In this vision, he would walk up to the fan and, leaning into “this weird nerd meta-subtext,” say: “‘Ships of the Northern Fleet’! Great show! Love the show!”

Those Who Wish Me Dead trailer: Angelina Jolie’s action thriller promises to be a gripping affair

EastEnders real-life couples’ breakups – and who they are dating now