If you’re fretting over the future of your favourite Arrowverse show, you can rest easy now – The CW doesn’t plan to cancel any of them.

Even though Batwoman is on its way to the shared universe and there’s another show also in the works, the network’s president Mark Pedowitz has confirmed that the current slate of DC Comics-inspired series – Arrow, The Flash, Legends of Tomorrow and Supergirl, plus the unconnected Black Lightning – are all staying put. 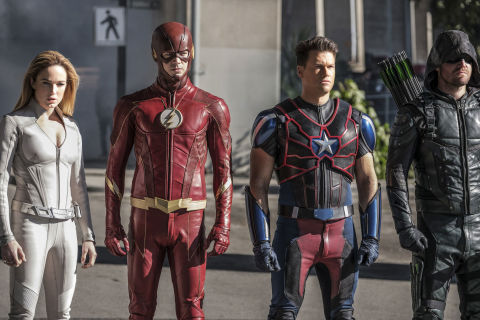 “Shows do eventually end, we have no plans yet to end one or any of them,” Pedowitz said at the Television Critics Association press tour this week. “We’ll see where we come out as the season goes on.”

Former Orange Is the New Black star Ruby Rose has been announced as the actress playing Batwoman (aka Kate Kane), the highest-profile LGBTQ+ character in the DC Universe.

Batwoman is set to make her debut in the Arrowverse in an upcoming crossover episode that will air in December, before the series is expected to premiere in 2019.

This year’s big Arrowverse crossover event will feature CW shows Arrow, Supergirl and The Flash, but not Legends of Tomorrow, as series star Caity Lotz, who plays Sara Lance, previously told media including Digital Spy: “We’re doing our own thing.”

The Arrowverse crossover event is due to air on The CW in December. Sky One airs the shows in the UK.

‘There is so much more I can do’