In the latest video, Sutapa Sikdar is seen tutoring her son Babil Khan and actor Isha Sharvani on how to bargain in a shoe shop. She also revealed how her son was one of the light boys on Qarib Qarib Singlle. Irrfan Khan’s son Babil is quite active on social media and often shares sneak peeks into his life. Recently, he posted a fun video featuring his mother Sutapa Sikdar where she is bargaining with a shopkeeper in Gangtok.

In the video, Sutapa is seen tutoring Babil and actor Isha Sharvani on how to bargain in a shoe shop. Meanwhile, Isha is seen laughing as Sutapa tried to convince the shopkeeper to give her four pairs of shoes at a cheaper rate. Sharing the video, Babil wrote, “Isha (@isha.sharvani )and I getting a master class on how to bargain in Gangtok by mother of all business modules, AKA @sikdarsutapa.”

Reacting to the video, Sutapa commented on it and revealed that the video is from the time when Irrfan Khan was shooting for Qarib Qarib Singlle and Babil was among the light boys. She wrote, “Babil!! Oye Hero, say Thanks first. I was buying shoes for you !!, for your entire team of light boys.!! (yes time to disclose you were one of them😂 )as thank you gift from you to them !! In Gangtok bylanes for qareeb qareeb single shoot.”

As Sutapa asked Babil to be thankful to her, he wrote a long comment where he mentioned how much he loves her. “Mamma, you’re the wind in my turbine, you’re the sun in my solar kar panels, you’re the extra mirchi in my dal makhani, you’re the one that carries this imbecile for 9 months in her womb and the 22 years in life/sacrifice – ab bolta rahun kya? Kyunki phir book likhni padegi. I love you but you already know that,” Babil commented. 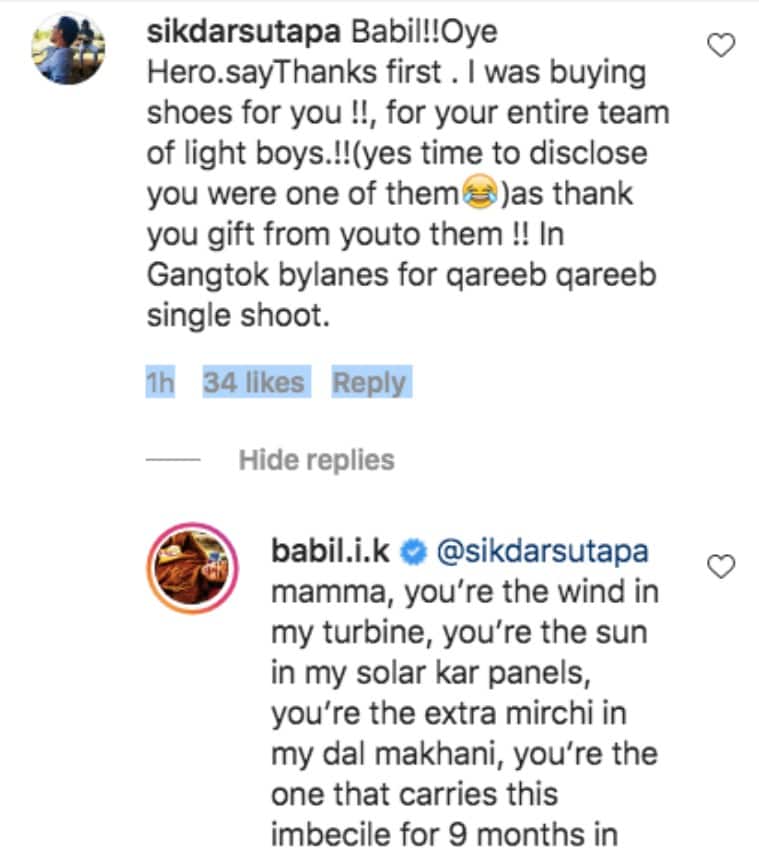 On the work front, Babil has bagged a film that will be helmed by National Award-winning filmmaker Shoojit Sircar.Apart from the yet-to-be-titled film, he also has Netflix’s Qala in his kitty. Directed by Anvitaa Dutt and bankrolled by Anushka Sharma under her production banner Clean Slate Filmz, the film also stars Tripti Dimri and Swastika Mukherjee.