Suits has revealed its midseason premiere date in a new teaser, also promising some pretty big changes to the second half of season eight.

The clip confirms that new episodes will return to USA Network on January 23.

In September’s midseason finale, Louis Litt (Rick Hoffman) was promoted to managing partner of the firm – just as he decided he was going to take some time out.

“I had a nightmare last night that we made Louis managing partner,” Harvey (Gabriel Macht) tells Donna (Sarah Rafferty) in the new teaser.

A new addition to the latest episodes is Grimm‘s Sasha Roiz as Donna’s love interest Thomas Kessler, the CEO of a furniture design company – a client of Zane Specter Litt. 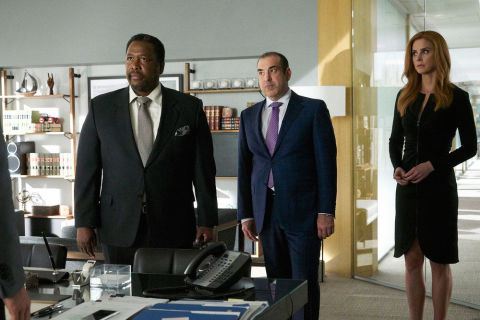 Suits showrunner Aaron Korsh previously chatted to TVLine about Louis’ new role at the firm – and his upcoming responsibility as a new dad – revealing that the Pit Bull is “nervous”.

“Just when [Louis] makes the decision to take a step back from work and be willing to step down when he finds out he’s going to have a baby, Donna comes to him and says he needs to take over. I love the irony of that in the finale,” he said.

“But once he agrees to take the job, he’s going to have to deal with: What’s his first day going to be like? He’s nervous. He’s going to want to do a good job.”

Related ArticleSuits congratulates Meghan and Harry on their baby news

‘Bold And The Beautiful’ Spoilers For Monday, September 10: Brooke & Steffy’s Fight Leads To A Hasty Decision

Hrithik Roshan plays the piano in new video, can you spot Sussanne Khan?

‘This Is Us’: Mandy Moore Sheds Light On Rebecca’s Mystery Suitor After Love Triangle Cliffhanger

Shah Rukh Khan: Way forward for any country is by educating itself more