Shamshera‘s problem is a shocking inability to support its bombastic ideas with gripping drama.
The result is the wastage of not one but two Ranbir Kapoors, observes Sukanya Verma.

There was a time when a movie’s value was dismissed if it was mindless masala.

But in Shamshera, it acts as a USP of sorts what with Ranbir Kapoor, the poster boy of coming-of-age tearing down his contemporary image to play an old-school daku in pre-independence India — except it’s really a post-Baahubali and KGF world, celebrated for epic spectacle taking precedence over everything else.

The super success of these extravaganzas from down South weighs down heavily on Shamshera and its blatant attempts to repeat the formula.

Director Karan Malhotra is no stranger to the over-the-top aesthetic, which while benefited his Agneepath remake, it completely went bust in Brothers‘ overstuffed melodrama.

Shamshera‘s problem isn’t its lack of ambition but a shocking inability to support its bombastic ideas with gripping drama.

The result is the wastage of not one but two Ranbir Kapoors.

Set in a fictional region of Kaza, marked by rugged ridges and stark skies, Shamshera depicts the subjugation of a shrinking tribe called Khameran.

Relegated to the lowest rung of the caste ladder, they protest by robbing the rich and rescuing the poor.

Perhaps the Thugs of Hindostan fiasco is fresh in Yash Raj Films memory, so this time, the bad guy is not a phirang but a slimy, savage Brahmin policeman in the British army called Shudh Singh (Sanjay Dutt).

Get past the obviousness of his overstated religious symbolism and devious higher ground, then comes the fun part (in a strictly so-bad-it’s-good sense.)

For a daroga though, Shudh sure wields undue power.

It’s hilarious how his bosses are reduced to puppets and spectators while he calls the shots.

What’s funnier is Dutt playing him in the same tone as Raghubhai, Munnabhai, Musabhai, Billabhai, the ilk.

You can take Dutt to any time period but you cannot take the tapori out of him.

Having said that, he’s easily the most entertaining thing about Shamshera. The man has encountered way too many ’80s villains to miss the sur of a birdbrained potboiler.

Speaking of birds, a surge of VFX generated crows fill the frames in tandem with Shamshera’s daredevilry. Not sure if we are supposed to find a metaphor in that but this daku is definitely not Dark Knight.

Except his face-offs with Dutt lack bite.

Neither the senior Shamshera nor his lookalike son Balli get any meat to chew on.

In writers Neelesh Mishra and Khila Bisht’s wishy-washy characterisation, both the Ranbirs are reduced to beefed-up action figures.

Hamming doesn’t come naturally to him.

I was distracted by Ranbir’s constant trembling and chattering teeth.

At times, his over-serious air has such a role-playing game ardour, it is as though he’s in a Telugu blockbuster parody.

But he sure dances like a dream every time Shamshera‘s nimble choreography offers him a chance.

As does Vaani Kapoor.

She has little else to contribute to a movie that suffers the same fate as every daku drama heroine has before her — dancing a storm, delivering a child.

A hotchpotch of yesteryear Bollywood and currently trending Southern wave, Shudh’s sly trap for the Khameran people pushes them into bleak captivity like the hostages in KGF while the martyr father-sacrificing mom-avenger son angle has the soul of Baahubali, Shamshera plays out like a children’s yarn you make up along the way without any recollection of previous day’s narration.

As a result of the patchy hack job, the characters refuse to grow on us or leave a mark.

Not a single member of Balli’s rebel group registers, if anything Saurabh Shukla blabbering Piyush Mishra-penned rhymes gets on the nerves.

Yet, Shamshera expects us to shed tears when one of them bites the dust.

The trailer’s sepia tinted frames and tungsten blue filters gave such a big screen vibe but I was disappointed by its random Trumotion shifts befitting a television series.

Even the action is uninspired.

There’s no strategy in what the dacoits are trying to achieve.

There’s no sense in the out-manoeuvring that jumps from looting in secrecy to openly challenging British officers in a duel.

Who are the men dressed up as fakirs shaking a leg around a nautanki dancer?

Does anyone really care for Shamshera’s rescue plan?

What’s the creepy Gollum-ish voice popping in the background accompanying Shudh Singh after the interval? 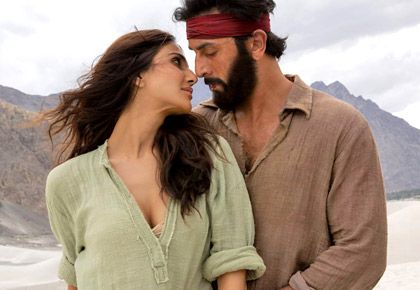 Column: How a corpse can be a sounding board in a film

Sound of Metal director Darius Marder: I love it when you can earn an ending

The afterlife of Section 377