The starry photo got a lot of love from Farhan Akhtar's friends and colleagues from Bollywood. 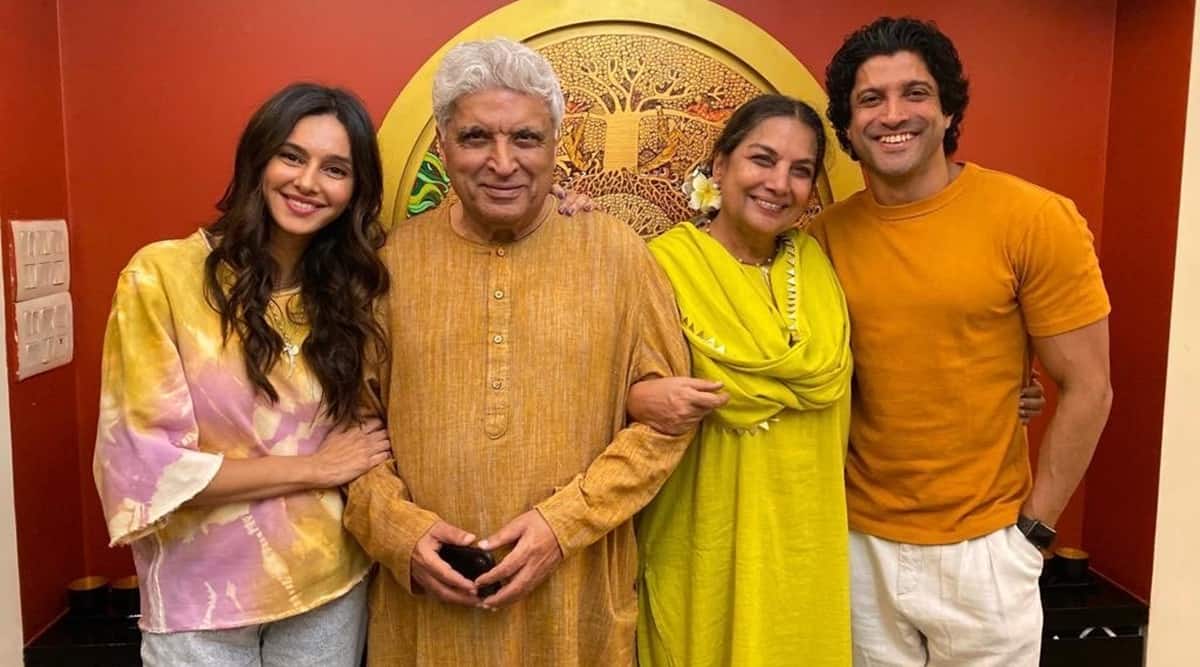 Shabana Azmi on Saturday posted on Instagram a lovely picture of herself and husband-lyricist Javed Akhtar posing with his son Farhan Akhtar and actor-girlfriend Shibani Dandekar. Shabana captioned what looked like the perfect family picture, writing, “Hassi Khushi.” The picture shows all of them dressed in shades of yellow.

As soon as she shared the photo, colleagues from Bollywood dropped comments under the post, showering love at the Akhtars. Richa Chadha, who has collaborated with Farhan on Fukrey franchise and Inside Edge series, wrote, “Toofani, sailab , jalwa and toofan.”

Writer Vijay Maurya dropped hearts, so did Pakistani star Sajal Ali, who has collaborated with Shabana Azmi on upcoming British comedy What’s Love Got to do with It. The film is being directed by Shekhar Kapur.

On the work front, Shaban Azmi will be next seen in Faraz Arif Ansari’s queer romance Sheer Qorma with Divya Dutta and Swara Bhasker. While Farhan Akhtar, sister filmmaker Zoya Akhtar are uniting for a documentary on Javed Akhtar’s glorious partnership with Salim Khan. The series titled Angry Young Men will be co-produced by Salim’s superstar son Salman Khan.

Farhan Akhtar will be next seen in Rakeysh Omprakash Mehra’s upcoming sports biopic Toofan opposite Mrunal Thakur. Toofan, which was earlier scheduled to release on May 21, was pushed after the second wave of Covid-19 hit the country in April. The film will now arrive on Amazon Prime Video on July 16.

Shibani Dandekar will star in the Telugu and Malayalam remake of 2014 Kangana Ranaut-led Queen — That is Mahalakshmi and Zam Zam — respectively.

What made Randeep Hooda’s jaw drop!

Buttler questions use of stump microphones