The Central Board of Film Certification (CBFC) chairman, Prasoon Joshi said the makers of Rasbhari should have spared the children in their "desperate" need for entertainment. 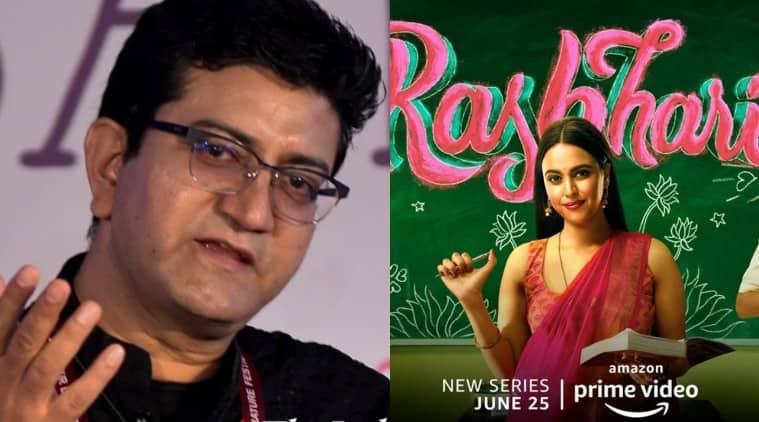 Set in Meerut, Rasbhari revolves around a boy Nand (Ayushmaan Saxena) who falls for his teacher (Swara). Things complicate when people find out about the teacher’s supposed ‘sex-obsessed’ alter-ego.

The series is written by Shantanu Shrivastava and directed by Nikhil Nagesh Bhatt.

The Central Board of Film Certification (CBFC) chairman said the makers should have spared the children in their “desperate” need for entertainment.

“Saddened by Web series #Rasbhari’s irresponsible content portraying a little girl child dancing provocatively in front of men drinking. Creators & audience need to seriously rethink freedom of expression or freedom of exploitation? Let’s spare children in the desperate need for entertainment,” Joshi, who is the chairman of Central Board of Fim Certification, said.

The series, co-created and produced by Applause Entertainment and Tanveer Bookwala, started streaming on Amazon Prime Video on Thursday.

In response to Joshi’s criticism, Bookwala said the lyricist had probably missed the subtext of the scene.

“Sir, I feel like the scene has misrepresented itself to you. Or you’ve missed the glaring subtext and meta satire. We’ve all lived through the family circus and dance. This isn’t a gender or age myopic exploitation, it’s the hypocrisy of the effects of pop culture on society,” he tweeted.

Swara Bhasker also clarified that the scene doesn’t intend to objectify the little girl. She wrote, “आदर सहित सर, शायद आप scene ग़लत समझ रहे हैं। सीन जो वर्णन किया है उसके ठीक उल्टा है। बच्ची अपने मर्ज़ी से नाच रही है- पिता देख कर झेंप जाता है & शर्मिंदा होता है।नाच उत्तेजक नहीं है, बच्ची बस नाच रही है, वो नहीं जानती समाज उसे भी sexualise करेगा- scene यही दिखाता है। #Rashbhari (Sir, you are getting the scene wrong. It is the exact opposite of how you have perceived it. The small girl is dancing on her own wish and her father is embarrassed. The dance is not shameful. The girl is just dancing, she doesn’t know that society will sexualise her. This is what the scene shows.)”

As new Captain America gets hate on Twitter, find out who is The Falcon and the Winter Soldier’s John Walker

It’s official — no IPL this summer