Avid Pop Idol fans may recall former reject Danny Tetley, who got turned away by Simon Cowell 17 years ago. You know, back in the days when Cowell wore high-waisted trousers and black v-necks. Oh.

Well, guess what Simon? Danny is BACK, and he’s not going to take no for an answer this time.

As he arrives on stage for his audition – with the crowd already presuming he’s going to be rubbish just because of his bubbly nature – Robbie Williams tells him: “I tell you what, you’ve brought some personality on the stage already, and thank God.” 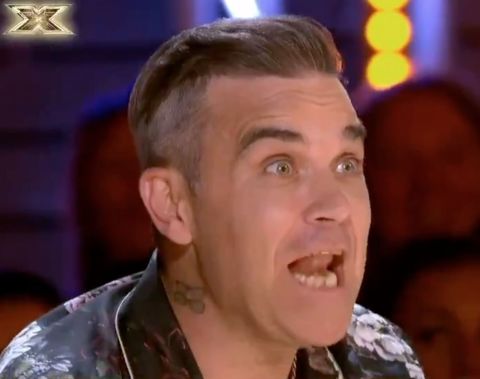 When Robbie asks him whether he’s ever tried to break into the music industry before, he admits: “I did try for Simon many years ago on a show called Pop Idol… Not a lot [happened], that’s why I’m back here.”

He added: “This is my World Cup final, I’ve been waiting 17 years to sing back to you. All these years, that I’ve still got the same passion as before.”

“Don’t go out in the semis!” Robbie quips.

Benidorm fans may also recall Danny performing in the last episode of the ninth series in May last year. The episode caused controversy and sparked Ofcom complaints due to a comment Sherrie Hewson’s character made about him after he sang.

Joyce Temple-Savage said he had “the voice of a 13-year-old girl and a face like a dropped pie”.

An ITV spokesperson said at the time: “Danny is a very talented performer and hugely popular on the circuit. We were thrilled to have him on the show.”

Danny also auditioned for Popstars the Rivals, but failed to make it past the first round (via the Digital Spy forums).

See how Danny does when The X Factor returns on Saturday on ITV.

Major Drama to Unfold in Beyhadh 2; Rudra to Confront MJ

People have reduced ‘Pullingo’ to a slur: Gana Stephen

Police kiosk at Idgah camp is of little help to us, say victims

Have you seen these videos of Bipasha Basu, Shilpa Shetty and Ranveer Singh?

Meet this London man who makes art with chewing gum