How hard must that be when you are among the country’s most prominent film-makers?

It’s only while watching the glorious Ponniyin Selvan: 1 that one realises the depth and dedication of ambition this labour of love entails.

I haven’t read Kalki’s books, but the excitement for its legacy is undeniably impressive.

It’s easy to see what the fuss is about.

At the risk of sounding like an awestruck tourist, the events of Ponniyin Selvan‘s first installment (the second part will release sometime later next year) transported me to another realm, another era. (If possible watch it in Tamil like I did, the English subtitles by Nasreen Munni Kabir do a fine job of putting things in context.)

There’s no shortage of showy extravaganzas in the market but what distinguishes this labyrinthine drama is Mani Ratnam’s sophisticated storyteller crafting a piece of marvel, a slice of fictional history whose aesthetics and politics are coloured in nuance.

Sure, there’s plenty of drama and A R Rahman’s magnificent score underlining the scale of it all, but Ponniyin Selvan: 1‘s ethereal spectacle doesn’t possess a single bombastic bone in its body.

Every dance number is an exquisitely choreographed ballet capturing culture and mythology in all its ferocity and elegance.

Characters favour wit and slyness over pomposity while an undercurrent of sadness shrouds its most charismatic players.

The movie demands you submit yourself to its vision and bask in the beauty and intrigue.

Every little detail — from the ornate brass lamp, the delicately painted walls documenting war, the workmanship of the jadau jewellery to the breath-taking production design is designed to convey an element of enigma or violence.

In the beginning, I was a tad overwhelmed by the complex prologue and all the numerous characters central to the plot.

There are over two dozen key characters and it’s difficult to keep track of names and motives, but as the epic progresses, PS1 takes over the senses and spontaneously informs the brain all the emotions it needs to feel and details it must hold on to.

Against the background of the 10th century Chola kingdom unfolds the story of a troika of royal siblings proving too strong-headed for their ailing father to handle.

For starters, there’s Aditha Karikalan (Vikram), crown prince and conqueror waging battles to get his mind off a romance gone sour, followed by Princess Kundavai (Trisha) whose unmatched beauty and brains cannot save her from the age-old ‘When are you getting married?’ inquiries.

Finally, there’s Arulmozhi Varman (Jayam Ravi), an unassuming but valorous royal guided by his conscience and duty, holding the fort in Lanka.

As captivating they are, both men are somewhat reluctant to defend the threats to their throne.

Instead, Aditha appoints the Vanar clan’s Vanthiyathevan (Karthi) — a comical, charismatic figure prone to flirting around every beauty he meets and get out of the stickiest of situations — to do his bidding.

Vanthiyathevan’s adventurous journey introduces us to all the key characters, devious schemes and majestic architecture one after another.

Enemies sneak up from every corner in the garb of plotting chieftains and brutish rebels but at the centre of all the antagonism is Aishwarya Rai Bachchan’s beguiling Nandini one can neither look away from nor trust.

But the paralysing effect of her allure on her much older husband (R Sarathkumar), storm of contradictions within ex-flame Aditha and unspoken rivalry with Kundavai imply she is much too sharp to be swayed by any of it.

Splendour is on full display and cinematographer Ravi Varman showcases it to dazzling effect in poetic compositions and painting-like visuals of the sea — silent or tempestuous.

Ponniyin Selvan: 1 is art with an edge. Like that dizzying sequence where Aditha shares his painful backstory while the camera swings in all directions to convey the chaos of his mind.

Vikram doesn’t have too many scenes, but his angst lingers on.

A resplendent Aishwarya reigns supreme whether she’s letting her guard down or mastering the art of manipulation.

Karthi is a scene-stealer at his swashbuckling best.

Mani Ratnam’s eye for intimacy, enigma, humour and menace bring out the glory of its source and all the imagination in store.

Its action-packed ‘ship caught in a sea storm’ climax is one of the wildest, wow things you’ll see this year.

Watch this dream come true for Manu Ratnam and cinema on the largest screen possible. 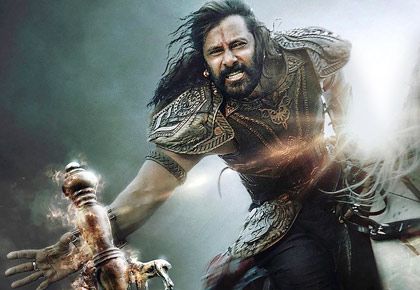 ‘I am very scared to be in Bigg Boss’