‘Politics has become a toilet because we delegate everything.’
‘We have to catch a bus, watch a cricket match, live our life… we feel this (politics) is not part of our responsibility.’ 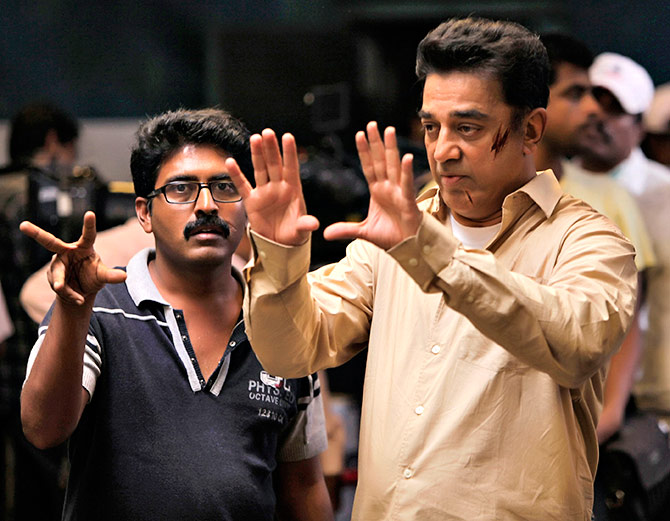 Kamal Haasan is trying to move on to the next phase of his life: Politics.

“How long can I act? It’s like staying in a class for too long. So either quit studies or do something or pass out,” he explains.

The actor-director, who is ready with his latest film Vishwaroopam 2, prefers to talk politics, discovers Rediff.com‘s Patcy N.

Did you always have a sequel in mind?

I conceived the full story, and then realised that it would make a 3 hour, 40 minute movie.

I did not want to edit it.

I thought the idea is to tell a story; what if you said it in parts?

I decided seven years ago that I would make a sequel.

Mr (Alfred) Hitchcock did not plan a franchise, but in a way, as a genre, he made the Hitchcock trend a franchise by continuously making (such movies).

You have sung in this film. At what age did you learn music?

I learnt music from childhood, but sporadically.

I have also learnt classical dance.

As a matter of fact, I was a choreographer in some films, including Ek Duuje Ke Liye.

I did not pursue music, but later, M Balamurali Krishna was kind enough to give me a few lessons. 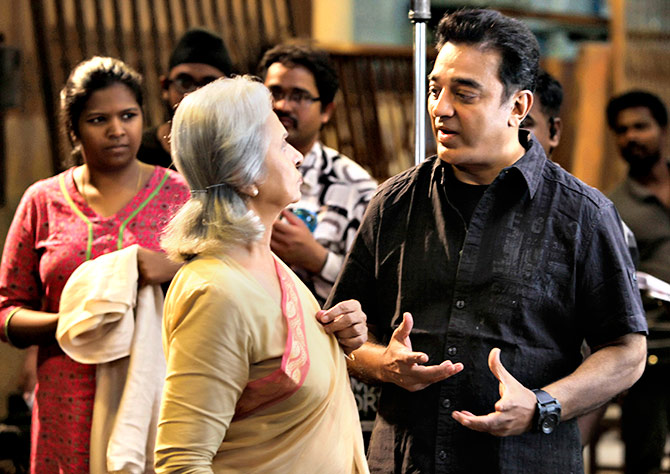 When Rajinikanth made Kaala, he added a political message. Will you do that with Vishwaroopam 2?

I have always given political messages.

It is wrong to compare one film-maker to another or one actor to another. Each one has an individual style.

I have always been different.

I have always dared and made politically relevant films.

To make a political comment and make fun of it is satire, but I have gone beyond that. I made a point of view as a citizen and artist to sensitise my audience.

I have done things that were necessary, from the time of Thevar Magan.

Appu Raja does not fall into that category, but if you watch some of my films — Thevar Magan, Mahanadi, Hey! Ram, Virumaandi…

Indian was not written by me, so I cannot lay claim to conceiving it as a message for my people.

I wrote Dasavathaaram, as a geo-political thriller.

It started with Dasavathaaram, but it became even more serious, almost akin to Hey! Ram in Vishwaroopam.

It is not a Dasavathaaram kind of light-hearted insertion of my ideal; it is a direct impart of what I felt is troubling me, globally. 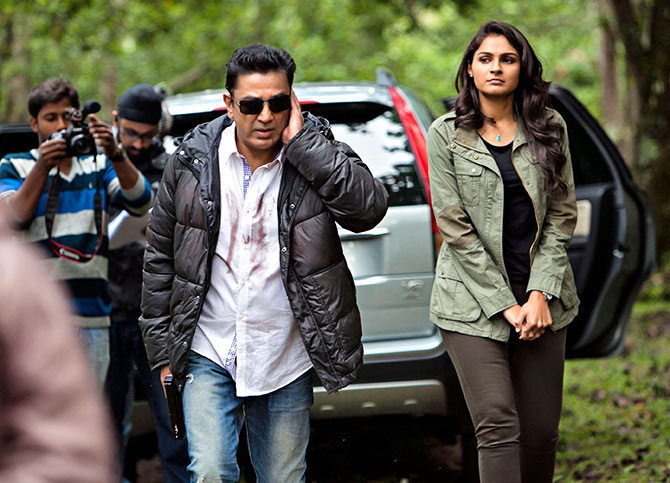 When did you start adding political messages in your films? It wasn’t there during Ek Duuje Ke Liye.

At that time, I was in the commercial zone.

The very first film that I wrote was embedded with politics. If not politics, it would at least have angry criticism of casteism.

It is also in the DNA of Tamil film-makers because we are a part of the anti-casteist movement. The environment was like that, and we could not escape that.

Somebody asked me, ‘Suppose you meet a 21-year-old Kamal Haasan, what advice would you give him, as a 63 year old?’

I replied, ‘There would not be any advice, there would be an apology because 21-year old Kamal Haasan would ask, ‘Sharam nahi aata? I told you to do it a long time back, abhi jaa ke kar rahe ho? Farz nibha rahe ho abhi at 63?

What were you doing? Busy making money and fame!’

Just a reminder that the clock is ticking and you have to wake up.

What message would you give, with the Lok Sabha elections coming up?

That is a pertinent message by itself.

Everybody has to remember it.

Chunav aayega, and what is your part in it?

We have always distanced ourselves (from politics), but politics should not be treated like lavatory cleaning.

Gandhiji took both with equal seriousness — that’s where it starts and that’s what we have to do.

Politics has become a toilet because we delegate everything. We have to catch a bus, watch a cricket match, live our life… we feel this (politics) is not part of our responsibility. Neta karke ek jantu aayega (a living thing named ‘politician’ will come) and he will take care of it.

That’s not how it should be.

We are that neta.

We make that neta.

We were all netas during the independence struggle.

Everybody in the satyagraha moment thought he had the DNA of Gandhiji, that’s why they call him Father Of The Nation.

Show me how C Rajagopalacharis you have in North India? How many?

E M S Namboodripads, do you have in Punjab?

Come to Tamil Nadu, and I will show you Subhas Chandra Bose, Gandhi, Jawahar…

Patel is a community, but Sardar Vallabhbhai Patel will be the name of a dark Dravidan there.

It might look like South India is trying to become an island and talking about separatism. Every state has that mindset — but Tamil Nadu has that great quality of wanting to belong to a nation.

I come from that DNA.

I truly believe I am the great grandson of Gandhi, and I said that to Tusharji (Tushar Gandhi, one of Mahatma Gandhi’s great grandsons).

There was a frown in the audience and I asked them, ‘Am I not? Are you not?’

There was applause in the auditorium, which meant they agreed.

This is the attitude of Tamil Nadu. 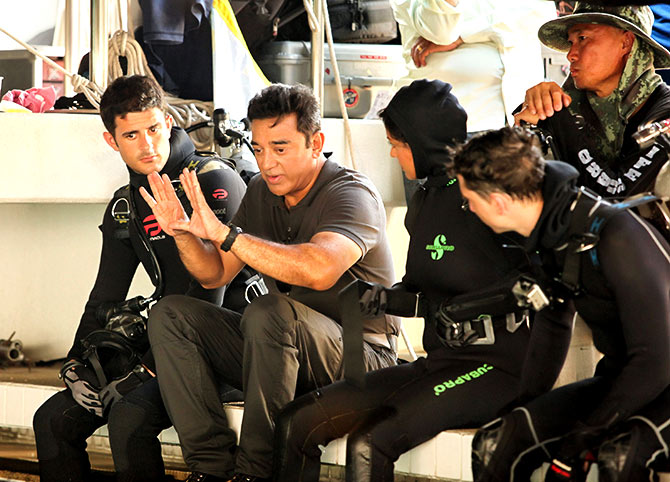 There is hyper nationalism in the country today, with so many instances of mob lynching. What is your take on that?

It is too good and versatile a country to go down that route, but all of us have to pitch in. We can’t just complain.

We can stand up together without damaging your career and livelihood because the voice will not be a loud hydrogen bomb. It will rise slowly, and the chorus will be heard.

You said you would quit films to join politics.

Yes. How and when will be seen, but it has to be done.

I have given the largest portion of my life to cinema. It’s not an exaggeration when I say my life, excluding the first three years, I have given to cinema.

Now, whatever is left, I have to give to what has made me what I am, and what is everybody’s duty today.

I am trying to move away from films.

I have done my bit.

How long can I act? It’s like staying in a class for too long.

So either quit studies or do something or pass out.

What is your political agenda?

It is very easy for a man like Gandhi to say, ‘My life is my message’.

For me, it is not a long message. I want to give a short message because my life is limited now.

I have entered politics at 63, so it is not going to be like Gandhiji’s long message.

It’s going to be short, so let me make it meaningful. 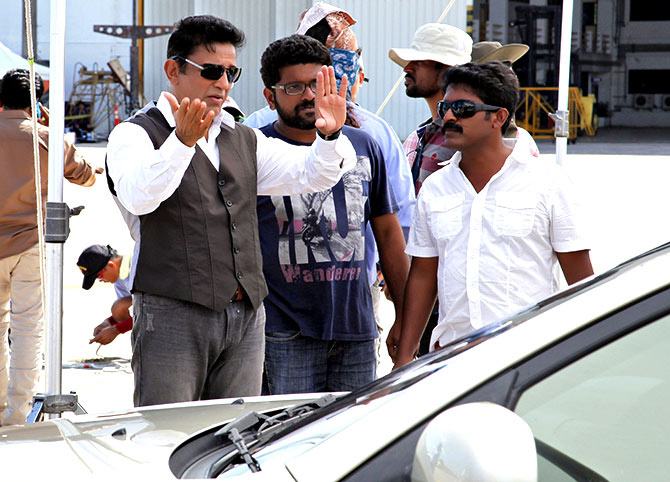 When you stop acting, will you still produce movies?

If I take up a political position, it will be difficult.

MGR has done 15 to 20 films even after becoming an MLA, but he was not the party president then.

The moment he became a party president, everything changed. He had to give up (movies). That may happen with me as well because it is a bigger responsibility. 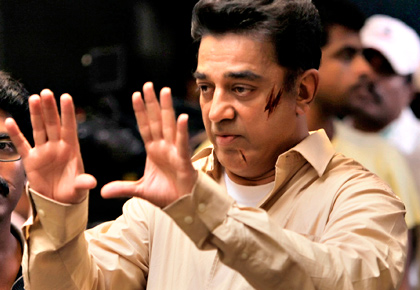 Have been getting lot of work from past three months: Vinta Nanda

Everything You Need to Know About 'Crazy Rich Asians'

Pharmacy seats across India up by nearly 30% in a yr