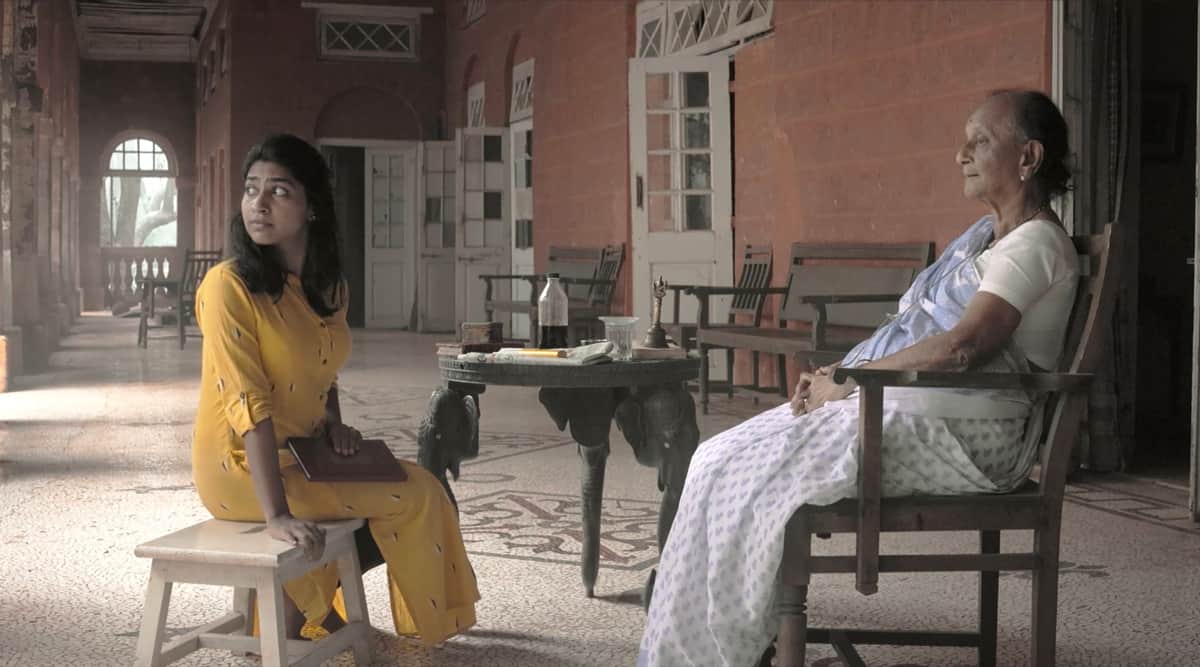 On not seeing her film among the runners-up of the Indian Competition at the virtual closing ceremony last month of Bengaluru International Short Film Festival (BISFF) 2020, India’s only Oscar-accredited short film festival in Live Action category, Nainisha Dedhia was about to shut her laptop when a scene from her film Dhummas popped up on the screen. She hadn’t expected to win. With that win, she entered the Oscars pool – roughly from 100-200 qualified films, the Academy first shortlists 10 and then five for nomination.

At the BISFF awards announcement, one of the juries, Sofia Castano, Argentinian writer, cinema and theatre critic and psychodramatist, called the film “subtle and piercing”. “It lets you sink slowly into the story and the relationship of these two women. It portrays not only suffering but also creativity,” she added. The other jury, writer-director Vikramaditya Motwane was astonished that the 22-year-old Dedhia exhibited the “capability and authority of a director who’s very mature and really knows the craft” so as to make an “amazingly paced, really well shot and performed film, with so much to say.”

The Gujarati short film will now screen at the first-ever Tamil Nadu Independent Film Festival (October 19-28) and at the 40th VGIK International Student Festival (November 16-20) in Moscow, curated by one of the world’s oldest film schools, Gerasimov Institute of Cinematography (aka VGIK). It will also show at the 9th edition of Dharamshala International Film Festival (October 29 -November 4), which goes online (on Shift72 platform across South Asia) owing to Covid-19 restrictions. Under the First Films category, Dhummas will compete with 17 titles for DIFF’s new Audience Award for Best First Film for short films in the otherwise non-competitive festival.

In the 19-minute film, the camera cuts through fog to enter a red-stone mansion, where a certain Mrinalini is writing a review of Mahadevi Verma’s radical essay collection, Srinkhala ki Kadiyan (Links in the Chain, 1941). A generational tale unfolds, of invisible oppression and insidious ways in which patriarchy works, clipped wings and repressed desires, little revolutionary acts and its subsequent psychological turmoil. The film is structured like a chamber play, the setting is two women in a room. A widowed grandmother-in-law (played by Gujarati TV host Pramodini Nanavati), whose memory is hazy, and the newly-wed granddaughter-in-law Mrinalini (National School of Drama-graduate Sonali Bhardwaj). Her interest is piqued when the grandmother mentions meeting Mahadevi Verma.

What ensues is the older woman’s remembrance of things past – in sepia mode. In the present, her shots are static and angular. Lensman Appu Prabhakar (he won the National Award for the 2018 Malayalam short film Eye Test) deftly plays with light and shadow. His subtle camera movements establish emotions – tension, regret, empathy – in the dialogue-less moments.

The books on the shelf – Harivansh Rai Bachchan, Mirabai ki Padavali, Tagore, Agnirekha (Verma), Nari Hriday tatha Anya Kahaniya (Subhadra Kumari Chauhan) – give Mrinalini a peek into grandmother’s personality. Act two is confrontation – of the older woman with her memories. Her feats – of writing stories secretly without the knowledge of her mother-in-law, for whom a woman’s job was to stir ladles and procreate sons. And regrets – of not becoming an accomplished writer, of not being able to name her son Rabindranath (an obvious reference to Nobel laureate Tagore), of attempting suicide but instead “when the rope’s noose tightens on the wrong nerve, (one) loses memory.” The third act is Mrinalini’s resolution. Through the stories of grandma’s resilience, she gauges her own marital noose (mangalsutra). Shot over five days in Matheran in 2019, Dhummas, which has also been shown at Mumbai International Film Festival and in Dhaka, Bangladesh, is Mumbai-based Dedhia’s student film. She graduated this year from National Institute of Design, Ahmedabad.

When writing it, she had Mahasweta Devi’s Dopdi/Draupadi and its Naxalite context in mind, and wanted to use that treatment. But what evolved was a story that already existed. A friend directed Dedhia to KR Meera’s story Ormayude Njarambu (The Vein of Memory, 2002), on which she based her film. Meera’s characters assert that writing is their act of revenge. “The challenge was to adapt it from a Malayali context to a Gujarati household,” says Dedhia, “I wanted to make the film in my mother tongue. Besides, my Hindi isn’t as clean, and the crux of the film lies in its dialogues. If I can’t get the dialogues right, it won’t work.” The older woman has been sketched along her Baima’s (maternal grandmother’s) image, though, Baima, who would travel on work, had a liberated background. A chance meeting led her to cast Nanavati, who still dances at 85 years of age. Nanavati told Dedhia that her own marriage didn’t allow her to take up acting, and only after her husband passed away could she take to dancing at the age of 60.

Keeping the story true to Meera’s original, Dedhia makes minute additions like naming the younger woman Mrinalini (a not-so-subtle reference to Tagore’s wife) and making the older woman eat chocolate – an inconsequential act but one where she has agency to address her desire. “It is the small things that you see in your house, those are the triggers (for making the film),” she says.

Indians are reclaiming, and redefining, the idea of secularism | Opinion