‘I belonged to the working class, not the middle class.’
‘I was a rag-picker. I used to pick up coal from the railway tracks.’
‘I was rejected from the FTII, as I was very unkempt and skinny.’
‘I did not look like a hero, villain or comedian.’
‘But Girish Karnad and Jairaj said I should be taken based on merit, not looks.’ 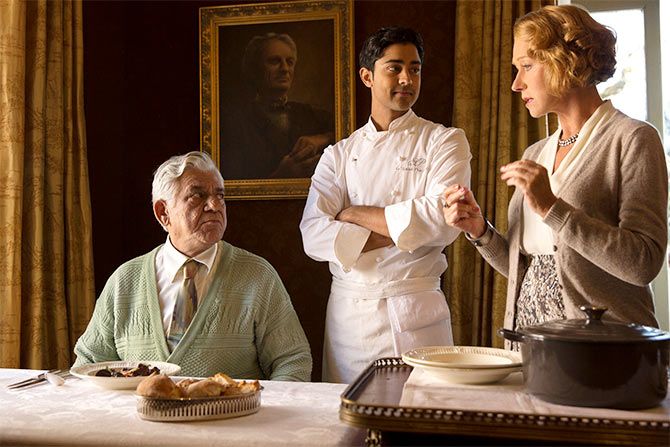 At the launch of his biography Unlikely Hero, Om Puri got quite emotional as he remembered the people in his life.

And what a life it has been. From a rag-picker to an actor of such fine calibre, Om Puri has lived a full life.

At the book launch, he spoke about his biography — written by his wife Nandita Puri — and the controversy that accompanied it. Rediff.com‘s Patcy N listened in. This feature was first published on November 24, 2009.

My wife studied in an English medium school while I studied in a municipal school. One day, when we were fighting, she used the word ‘zilch’.

I said ‘zilch kya hota hai (what is zilch).’ She said zero.

I have known Nandita for many years now. We first met in Kolkata when I was shooting for City Of Joy in 1991.

She was writing for Hindustan Times, The Statesman and The Telegraph and had come to interview me.

She never went back and stayed glued to me. I tried my best to separate, but the Fevicol was very strong (laughs).

When she came to Mumbai, she didn’t do anything for five years except meet friends and party.

Then Gulzarsaab reprimanded her and asked her why she wasn’t writing after leaving Kolkata. I coaxed her to write too. Eventually, she started a column in Mid-Day. She wrote a book of short stories.

I told her to write my biography in 1991, but she has been sitting on it.

Twenty years ago, Shyambabu (Benegal), who knew some of my childhood incidents, told me to write my autobiography because he could smell a film in it.

Those words remained in my mind.

But my wife sat on it for 20 years. I had to threaten her that either I will write it myself or I’ll get it written by someone else.

Within a year and a few months, the biography was ready.

I asked Rensil D’Silva — who wrote Rang De Basanti and directed Kurbaan — what his discipline of writing was. He said that if he didn’t write at least four pages a day, he would not get sleep.

Gulzarsaab gets up early every morning and starts writing or at least reading.

God knows what will happen when I go home today! 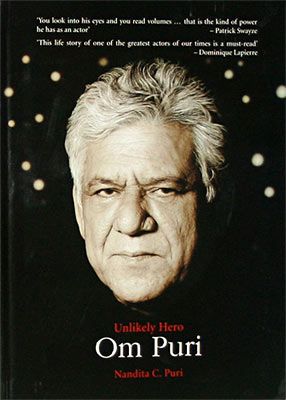 I was shooting in Chandigarh. Somebody told me something was written in Tehelka (about me), so I picked up a copy. There was a nice interview of Nandita, and two excerpts from the book, which were naughty.

When I read it, I took it in the right spirit.

But then it came on television, the first thing I realised was the power of the electronic media.

The entire country came to know that Om Puri had slept with working class women.

I got angry with my wife. I told her that even if she had no control over the leaked excerpts, she could have at least shut Barkha Dutt up and say that Om Puri’s book is not about this only.

Yes, he did sleep with a working woman, but the book is about his struggles.

I got very angry.

Two of my college friends called the next day and were not happy with the controversy. They asked me if it was a publicity stunt.

I was very embarrassed. So I decided to speak to the media. A journalist, whom I’d spoken to many times before, called me. Like a fool, not realising that six lines can become a full page, I spoke to the journalist.

The media protects the media. No one will write about Barkha Dutt or Miss De (Shobhaa De had blogged on the subject calling it a publicity stunt).

But I admire the media too. I have been in this city for over 32 years.

Not once have they written an article on the controversies or scandals in my life. They have always admired me and written nice things about me.

I’m just saying that a few sentences can destroy anyone.

I expected Barkha to ask Nandita what the book was about and wanted Nandita to say a few lines about the book.

Then Barkha could have asked about me sleeping with the working class women.

If I had to hide something, why would it be in the book?

I have a question for the media: When you say Om Puri slept with the working class women, I want to ask what’s wrong with that?

I belonged to the working class myself, not the middle class.

I was a rag-picker. I used to pick up coal from the railway tracks.

‘Ardh Satya was my lottery’ 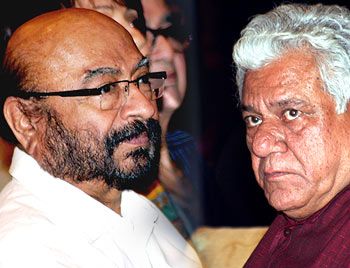 In the ninth standard, I was chucked out of my maternal uncle’s home (the story goes that Om Puri’s aunt was sleeping with her midriff showing, and he caressed it. She did not say anything but removed his hand. The next day, he was asked to leave the house).

I explained myself to the school’s headmaster, and he tried to persuade my uncle (to take me back).

He said that I was so bright, good in studies and sports. But they were very upset.

I couldn’t return to my parents’ home as they wouldn’t be able to send me to school. So my headmaster got me a rented house, gave me some money, got me a bicycle and a few tuitions so that I could take care of my expenses.

I was a boy scout, so I did my cooking myself.

I would wash my clothes, take tuitions and go to school. When I look back, I wonder how I did all that.

My biography is a tribute to children, who are going through this and worse in their lives.

On his mentors in the film industry:

My book also talks about my journey, my times in NSD (the National School of Drama) and FTII (the Film and Television Institute Of India), my theatre work, my films, my love life, my mistakes, my weaknesses and my tributes to friends who helped me, my teachers who influenced me and my mentors like Govind Nihalani, Shyam Benegal and Girish Karnad.

I was rejected from the FTII, as I was very unkempt and skinny. I did not look like a hero, villain or comedian.

But Girish Karnad and (veteran actor) Jairaj said I should be taken based on merit, not looks.

My first film Aakrosh brought me to the notice of all the good filmmakers of India.

Satyajit Raysaab called me after seeing the film and offered Sadgati to me.

Ardh Satya was my lottery, and I thank Bachchansaab for that.

Govind Nihalani had first gone to Bachchansaab, but he was very busy. So I got the role.

Amitabh Bachchan is an institution.

He has been an inspiration to an entire generation of actors.

He is not much older than me, but he’s six or seven years senior to me in the film industry.

I was at the NSD when I first saw his films, Anand and Namak Haram. That gave me hope that some day I will get to work in Bollywood.

I didn’t realise that one day I would work with him.

It was my dream come true when I worked with him in three films, Dev, Baabul and Lakshya. 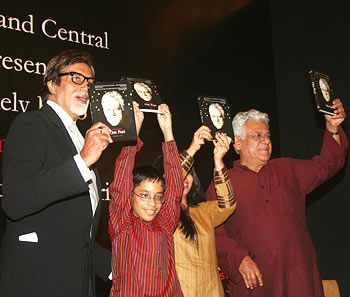 Almost one third of my life is not mentioned in the book. I would like to include some portions in later editions.

It’s unfair to a couple of people and relationships, where I wanted to express my feelings.

Two people are not mentioned in the book the way I wanted them to be. I feel guilty about that.

One is Mala. She’s a costume designer and did costumes for Tamas and Drohkaal. She got a National Award for Rudaali.

The other person is my ex-wife Seema Kapoor. I have known her for 11 years. We had a good friendship, but when we got married in 1990, things did not work out between us. She was a good singer and talented writer.

At the three-month shoot for City Of Joy, I thought she would stay with me, but she left within a few days.

Our marriage lasted only eight months. I was very upset. Many years later, she explained that she had a complex with the English language and could not handle the foreign unit.

I was desperate and found Nandita. I fell in love with her. I was in a dilemma for a year.

I had to select between Seema and Nandita. I thought Seema was stronger. Nandita was just 24 and so, more vulnerable. So I left Seema and filed a case against her.

My lawyer asked me to file for divorce on grounds of adultery. I protested against it (but we went ahead). I feel ashamed and guilty now.

Buzz: Anushka’s Next With This Eccentric Director?

Kartik Aaryan reveals the kind of woman his mom will send rishta to, Barkha Dutt promises to find him a bride