Mind The Malhotras is like a bus that skipped a few stops on its route, observes Deepa Gahlot.

With sitcoms like Dekh Bhai Dekh, Yeh Jo Hai Zindagi and Sarabhai vs Sarabhai always fresh in memory, Mind The Malhotras has a tough act to follow.

The Indian version of the Israeli show La Familia was a mildly funny series about a squabbling couple, who need a therapist to survive their dysfunctional family and their day-to-day crises.

Season 2, adapted by Karan Sharma and Director Sahil Sangha, is more of the same.

The problems of the screen family get compounded, but the humour seems forced, and the situations transplanted from another culture into Mumbai do not work all the time.

There is a fine line between the scenes and gags being relatable, and crossing into cliche territory.

The Malhotra couple is Shefali ‘Shef’ (Mini Mathur) and Rishabh (Cyrus Sahukar), with three weird children, an over-familiar domestic help Zoru (Rahul Verma), who eats at the table with them and sits on their sofa, something that one doesn’t usually see in Indian homes.

Their marital hassles are too banal for them to be running to a therapist (Denzil Smith). The sequences that repeat in words what has already been seen do not add anything to the show.

Jia’s romantic confusion takes up a lot of the show’s time, and since the character speaks in a slow, deliberately dumb manner, this track is just irritating.

As Rishabh is preparing for a merger of his ball bearings company with a Japanese firm, Shef’s college boyfriend, also called Rishabh (Sameer Kochhar) turns up.

So perfect is he — the kind who has a gym-toned body and remembers Shef’s birthday — he makes her husband jealous.

When his rival moves into their building with his bachelor buddy, Rishabh’s insecurity goes through the roof.

Meanwhile, unknown to him, his mother Sunita (Sushmita Mukherji) has fallen in love with Roshan (Dalip Tahil) and is afraid to confess to her son.

Shefali, who runs a cooking channel, finds her mother-in-law’s excessively friendly overtures annoying, more so when she is expected to keep her secret.

The 10-part show, with a brisk runtime of 25 minutes for each episode, still feels like it drags because just a few sequences reach their full comic potential. Like the cook-off between Shefali and Chef Maria (Maria Goretti in a guest appearance).

Mostly it just plods along trying to balance humour with social issues — like social acceptance of gays, an autumn love affair and teenage pregnancy — which are then treated with an odd flippancy.

The actors, with the exception of Sushmita Mukhejee and Mini Mathur, who catch the pulse of their characters, flounder over what level of a comic tone to hit, when to underplay and when to go over the top.

The Malhotra home looks like an old-fashioned set that went out with Doordarshan sitcoms.

Web shows these days are getting to be more realistic in their look, story-telling and messaging (if any).

Mind The Malhotras has its moments (it actually could do with a judicious use of the laugh track, the background music is ineffectual), but most of the time, it is like a bus that skipped a few stops on its route. 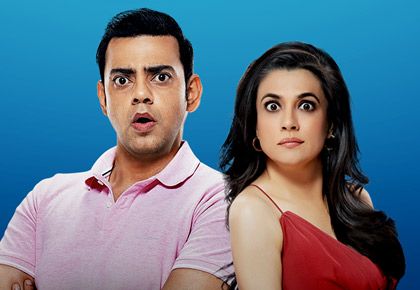 Bigg Boss: ‘If there was no jodi concept, I ‘d have lasted longer’

India vs Bangladesh: ‘Pink ball Test not the only solution’ – Dravid on how to improve Test cricket’s health

97 test positive for Covid-19 at ITC Grand Chola in Chennai; 25 at another luxury hotel