Masaba Masaba 2 is funnier and sassier this time around, observes Namrata Thakker.

Designer-turned-actor Masaba Gupta is back on the small screen with the second season of her quirky show, Masaba Masaba.

Co-starring her mother Neena Gupta and Neil Bhoopalam, the seven episode show is a breezy watch with a whole lot of comedy, romance and ,of course, glamour.

The show starts off with Masaba dealing with a false pregnancy alarm and then swearing to never date and just focusing on her work.

Dhairya Rana (Neil), Masaba’s investor friend who is about to ask her out, is obviously disappointed with her new mantra.

Moving on, Masaba decides to expand her brand and brings on a new PR when she realises a teenager, who is an Instagram influencer and not so much of a designer, could replace her.

In comes Nicole, played by Kusha Kapila and she advises Masaba to foray into the wedding space with bridal wear, which will make her brand bigger and better.

He’s hot, he’s fun, but he’s the groom Masaba will have to design the wedding outfit for.

Though Masaba is attracted to Fateh, there’s something happening between her and Dhairya as well.

As the designer navigates her complicated personal life, her mum revives her old hit show, Fursat, in the hope to dish out a progressive show for audiences once again.

She teams up with her ex-beau and co-star Shekhar Mirza (Ram Kapoor) for the same despite the two sharing a not-so-good history.

While Masaba has a lot on her plate to deal with — like deciding to freeze her eggs and helping her best friend Gia (Rytasha Rathore) with depression — Neena battles her own set of problems when she starts shooting.

The makers have focused more on the mother-daughter relationship this time and it works beautifully.

Masaba Masaba 2 has more depth as it deals with sexism and depression. But these subplots aren’t explored fully, which is a let down.

Also, the show has too many cameos by celebs. While it’s funny at first, after a point, it seems unnecessary and forced.

In the acting department, Masaba and Neena Gupta ace as usual.

Having said that, Masaba does lack a bit when it comes to emotional sequences. She’s good at comedy and romance, but needs to show more range as an actor.

Neena is an absolute darling. She looks gorgeous and acts her part well.

Hopefully, the makers will give her equal screen time as Masaba in the next season.

The rest of the cast lend good support, especially Kusha Kapila as the over-enthusiastic PR.

Neil Bhoopalam is good with his act and looks hotter. But his chemistry with Masaba isn’t something to write about.

With a runtime of 30 minutes per episode, Masaba Masaba 2 is like a good rom-com movie.

Not to forget, the show has many punch lines, some hilarious, some sarcastic and some epic. All of them make Masaba Masaba 2 funny and sassy. 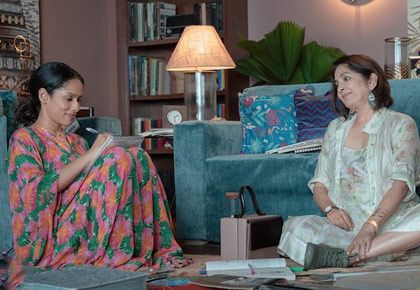 Aditya Roy Kapur: I don’t take all the criticisms in, for me ignorance is bliss

’83: Ranveer Singh training with Kapil Dev and learning his signature shots will make you impatient for the film – watch video | BollywoodLife