The wishes of ’90s babies have been granted, as Kenan Thompson and Kel Mitchell have finally reunited – and on Nickelodeon, too!

OK, so the pair are only back together for a special episode of gameshow Double Dare, but that doesn’t mean it’s not time to get that orange soda popping.

Because while speaking to Bustle during filming for the Double Dare special, Kel confirmed that he and Kenan talk about a Kenan & Kel revival “all the time”.

Talking about an earlier reunion on The Tonight Show Starring Jimmy Fallon, Kel revealed that their comeback inspired them to “do some more stuff”.

Promising something bigger and better, he said: “We keep doing these little things for the fans but we’re definitely going to have something big for you guys to check out.

Teasing what his orange soda-loving character would be up to today, Kel imagined he would be the owner of “some orange soda company”. Obviously. 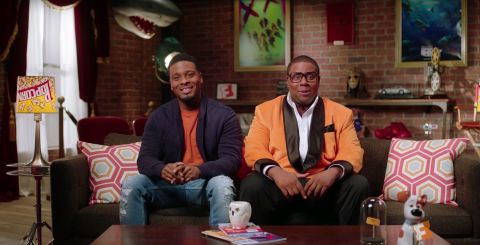 “His parents were astronauts and brain surgeons, so I think he would have finally tapped into something pretty big but then end up messing it up in some type of way,” he added.

“And then Kenan was always scheming on the show, so maybe he’s doing something crazy with Kel’s company and they end up losing everything.”

Impatient for a reunion? Don’t drop the screw in the tuna, just head over to Nickelodeon’s new streaming platform instead. It’s like the ’90s never ended.