‘We are not just making films like a business, we still love what we do.’
‘Being anxious is a sign that the heart still beats for the work that we do.’

Karan Malhotra has butterflies in his stomach these days. His new film Shamshera is all set to release on July 22.

He can’t stop raving about his leading man Ranbir Kapoor, but he pauses long enough to give us a glimpse into his own journey.

“I started working as an assistant. I had to pick up the light, sweep the floor, make chai for the director, take food orders… I have done all that is possible from the junior-most to the senior-most,” he tells Ronjita Kulkarni/Rediff.com in the second of a three-part interview.

What made you become a director?

When I started working as an AD (assistant director), I never knew what direction was.

I knew I enjoyed the atmosphere.

I knew I really wanted to work in the field, but I never understood what direction was.

Only after I finished my first film as an AD that I realised what a director was — I was assisting Raj Kumar Santoshi; I did bits of Pukar, and almost all of Lajja.

I just fell in love with the whole concept of being able to create your own world, your own characters, build a story around it and present it to people for them to enjoy.

My father was a film producer, and he had told me that if you want to be a director, you will always be respected for your mind, not your money.

Money can come and go, but nobody can take your mind, your intellect away.

Your mind will always be your greatest asset.

I remember those words even now.

I’m fortunate to be able to live up to the dream that I saw. 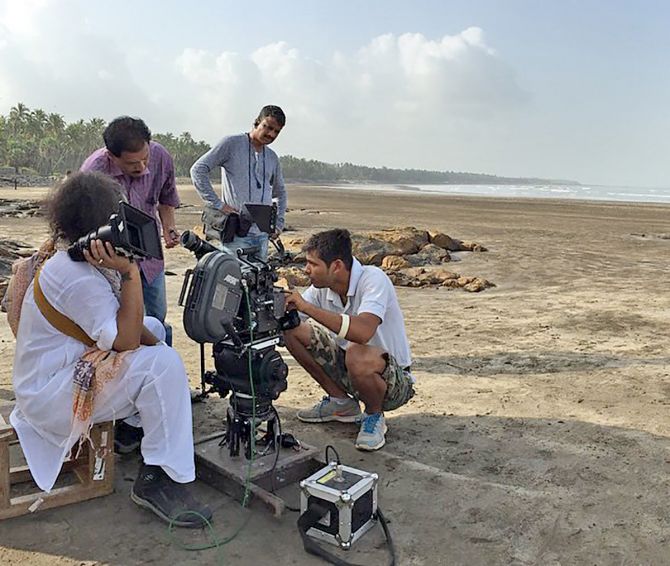 How did you become an AD?

I started working when I was about 16-17 years old and I don’t think at that, at that point, I had the understanding of what my career would be.

I knew that I wanted to work.

I was not a great student.

I remember my dad telling me that you need to start working if you don’t want to, behind a point, continue studying.

I started working as an assistant.

I had to pick up the light, sweep the floor, make chai for the director, take food orders… I have done all that is possible from the junior-most to the senior-most.

Yes, the only opportunity that I got was to meet directors, and I was lucky that they took me on.

But even then, believe me, work started from scratch.

So I did the running around and slowly, made my way through to what I wanted to do.

That’s how my journey started.

I’m lucky that I’ve worked with some really, really good directors, some really great mentors, and learned a lot from them and eventually follow my own destiny.

You worked as an AD for 10 years before you made your directorial debut. Was that wait frustrating?

I worked for 13 years before I became a director.

But no, no, it wasn’t frustrating.

I was working really, really, hard to make ends meet because when I started, we were not in a good financial condition.

I was slogging, working as an AD, getting whatever job I could to pay the bills, to survive and to earn for my family.

The moment I would reach a film set, I would forget all my worries.

I would love to be here for the rest of my life.

That is how the opportunities landed. And then Karan Johar asked you to direct your first film, Agneepath.

I was assisting him on My Name Is Khan at that time.

This was before we even started shooting the film.

Karan and all the ADs were sitting together and chatting and having a good time.

Karan asked us, what if they had to remake Agneepath, who could the director be.

We made recommendations, and I recommended some music directors too.

Two days later, he called me to his cabin and said that he was planning to adapt Agneepath, would I be interested in directing it?

I was shocked, but I just said yes.

Karan saw in me what even I did not realise about myself and he gave me Agneepath to direct and develop.

What are Karan Johar and Aditya Chopra like as producers?

They are both phenomenal in their own ways.

Karan has a knack of picking talent. He is all heart.

Adi is a mastermind businessman.

Believe me, I did exactly that.

There was not a single day when I was pressurised by production hassles or administrative issues or budgetary issues.

Adi is such a strong backbone of Shamshera that without him and his administrative qualities, the film wouldn’t have been the way it is.

Before the release of a film, everybody is anxious, and that’s the best part.

All of us have worked so long in the industry now, but the fact that you still get anxious and you still have butterflies in your stomach before a film releases means abhi bhi hum zinda hai.

We are not just making films like a business, we still love what we do.

Being anxious is a sign that the heart still beats for the work that we do.