Jersey is a sweet little drama that hits a home run on the strength of its heart and hero, applauds Sukanya Verma.

A promise can be a driving force.

A promise can be a burden.

But when a father struggles to get an Indian cricket team jersey for his son, a promise becomes a life mission.

Jersey is a father-son story whose source of sentiment is one’s innocence and the other’s failure.

But there is no special attempt to garner sympathy.

Unlike Aamir Khan trying really hard to be a perfect dad in Akele Hum Akele Tum, the bonding between Arjun (Shahid Kapoor) and his seven-year-old Kittu (Ronit Kamra) is a given.

Rather the story, told across multiple flashbacks across the ’80s, ’90s and present-day, only begins when his dad is down in the dumps and has grown somewhat uncommunicative with his family.

Once ‘the best batsmen of his time’ Arjun’s glory days as a domestic cricket star are long behind him and his only consolation and source of income, a Grade III officer position in a government job is a stalemate following a corruption case languishing in the courts.

Ten years have passed and Vidya ‘the girl who was always there to cheer for him’ is no longer a starry-eyed cheerleader, but a bitter half, a picture of slowly-built resentment (Mrunal Thakur).

A distant, solemn energy has superseded their once passionate equations but little Kittu is too young to understand the complexities of the grown-up world or judge them over it. And that hits Arjun more than having let down anyone — be it his wife or his coach (Pankaj Kapur).

It’s perpetually wintry in Chandigarh where Jersey captures its gloomy resident Arjun idling all his time around equally down-on-luck pals, pointing out flaws in upcoming players to their gushing girlfriends yet resisting any attempt to talk shop around his father-figure coach.

Despite his defeated state of mind, Jersey finds moments of humour in his everyday life and creates an endearing air through the people that touch Arjun’s lives.

Everybody may have stopped expecting miracles out of him but they are more than willing to help.

Of these, Pankaj Kapur’s affectionate coach is foremost.

The scenes between the real-life father-son are so effortlessly warm, its sheer genuineness instantly wins you over.

I had a big smile on my face when the Senior Kapur gushes, ‘He’s different’ and the scene cuts to the offspring obsessing over sauce on his samosa. Fans of the Kapur-Javed Jaffery iconic ketchup commercial will remember.

Gowtam Tinnanuri’s faithful remake of his Telugu hit is about a batting beast forced to hold back the fire in his belly for reasons that go well beyond the demands of domestic life. Except brooding is no less injurious to health.

Arjun then decides it’s time to swing that bat again.

Anand’s life motto forms the essence of Arjun’s journey from champion to loser to not out.

And Shahid Kapoor throws himself in the part resulting in a performance that feels splendidly lived-in.

It’s not the first time we’ve cheered for a failed, frustrated protagonist triumphing against all odds.

There’s almost a pattern to these stories, their emotional graph and our emotional reaction to it.

What is unique about Jersey is that in place of soppy melodrama or stylish training sequences (even though there’s no death of adrenaline-pumping rock ballads), it gives us a poignant insight into a tenacious mind.

It’s all the more challenging when a sport that welcomed a young daredevil with open arms is skeptical of his worth when he tries to attempt the same in his mid-30s.

Director Tinnanuri gently makes a case for late bloomers sans sermons or stunts. Like the rock-solid Nani of the original, he finds a spectacular embodiment of his ideals in Shahid Kapoor.

The greater Arjun suffers, the smoother he lands.

There are times when his back is turned to the screen and yet you hear the sound of his heart break into a thousand pieces.

It’s only in that brief moment of outburst he allows himself, drowning out his screams against that of a running train, the extent of his dormant volcano shows.

The actor’s comfort with the bat is commendable and injects zest in an otherwise predictable winning streak (DoP Anil Mehta wielding his magic on cricket once again after Lagaan).

Tinnanuri repeats the kid from his Telugu drama and Rohit Kamra is innocuous if not dazzling as the son whose jersey wish triggers it all.

I was impressed by the actor (Prit Kamani) playing his grown-up avatar as well as his stunning resemblance to Shahid.

But why is that whenever the focus is on father-son, the woman gets the short end of the stick?

That’s where Jersey loses some ground.

The movie acknowledges Vidya’s support but makes her look unreasonable even when there is no need.

Her animosity is understandable when Arjun is stuck in good-for-nothing mode, but why single her out as a grump even after he gets his act together and succeeds?

It’s good then Mrunal Thakur is far too likeable to stick out as a sore thumb.

All in all, Jersey is a sweet little drama that hits a home run on the strength of its heart and hero. 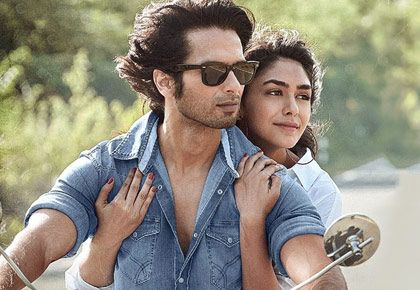 GLOW was almost cancelled by Netflix after its first season