Indianexpress.com catches up with Jyotika, Karthi and Jeethu Joseph as they discuss Thambi. 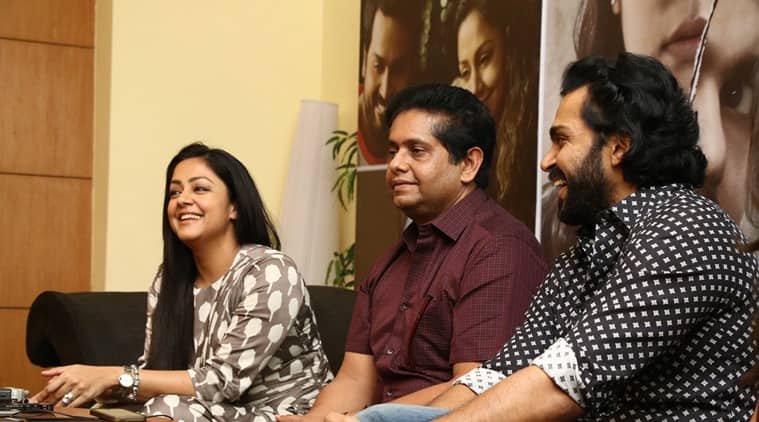 Actors Jyotika and Karthi are familiar with each other’s lives, so naturally, it reflects when they talk. Jyotika being a livewire that she is, says with a smile, “I thoroughly enjoy this phase as an actor. I am happy to see real and relatable characters being written for women. At least, I get five to six scripts a month. Every time, I get a quality script, I tell myself, ‘this is going to be my last’, but I end up signing back-to-back projects. I love it when I am busy.”

However, she insists that picking a commercial script isn’t easy today. “The heroes get it all, but for female actors, it’s still a struggle—to create a market of their own. I pick the best among what I get and tell Suriya about it,” she adds.

Karthi joins the conversation and says, “The sets of Thambi felt like home.” Jyotika interjects with, “I am telling you, this will be a proper Jeethu Joseph film.” Though Jyotika plays Karthi’s elder sister, she wanted to look younger than him. “That was my only objective,” Jyotika breaks into a grin.

After a pause, Karthi says, “In the film, Jo anni and I are at loggerheads most of the time, but the moment we unite, there’s a beautiful bond that establishes. I play Saravanan whose journey begins in Goa. My character is quite funny. The credit goes to Jeethu sir for giving me and Jo anni the space we deserved.”

A few years ago, Jeethu Joseph and Jyotika were to collaborate on a project, which never happened. The actor is glad she “finally featured in a Jeethu Joseph film.” On sharing screen space with her brother-in-law Karthi for the first time, Jyotika says it was a memorable experience. Also, she quickly adds, “It was much easier to act with Karthi than Suriya.” Quiz her why and pat comes the answer: “When Suriya and I act together, we used to fight like any other couple!”

I prod more. Jeethu Joseph turns to me, and says, “If you liked Papanasam, I am sure you’ll like this one too. If I speak much now, you won’t enjoy the suspense!” Jeethu is thankful to the Tamil audience for making Papanasam a hit. “I knew it was a good film, but I didn’t expect that kind of an overwhelming response,” he smiles.

Why a thriller again? Jeethu says, “I don’t understand why everyone asks the same question. Apart from Memories and Drishyam, I have made action films, but somehow, I am being identified more with the thriller genre.” He adds, “I don’t want to be branded as a filmmaker who does only a particular genre. Thambi is an emotional family entertainer; of course, with a few thriller elements here and there.”

At heart, Jeethu likes suspense as he grew up reading investigative thrillers. He admits it wasn’t his decision to get Karthi and Jyotika on board. “Both of them were already a part of the film by the time the producers called me to Bombay to discuss the story,” Jeethu shares. While the story is written by Rensil D’Silva of Rang De Basanti fame and Sameer Arora, Jeethu further sought K Manikandan’s help to pen dialogues in Tamil. “I am a Malayali, so I needed someone who understands the sensibilities of the Tamil audience to get the perfect diction. As for acting performances, Jyotika and Karthi are as dedicated as Mohanlal,” he observes.

Jeethu Joseph, who recently made his entry into Bollywood with The Body, also has a new Malayalam project Ram, with Mohanlal and Trisha in the lead. “I promise it won’t be another Drishyam,” he laughs.

Jeethu understands he has to live up to so many expectations when he makes a film. “I aim to tell good stories without worrying about the box office numbers. As for Thambi, I am not sure if I have made a perfect film, but it has a lot of heart.” Language has never been an issue for Jeethu Joseph as he is open to receiving inputs from writers. “At the end, it all boils down to emotions,” Jeethu notes.

This year has been packed for both the actors—Kaithi was Karthi’s latest release, and Jyotika was seen in Raatchasi and Jackpot. “I have two more interesting films in the pipeline, besides Ponmagal Vandhaal,” adds Jyotika.

Thambi also features veteran actor Sowcar Janaki and Sathyaraj in pivotal roles. Talking about Sowcar Janaki, Karthi says, “Even at 88, she is raring to go. She brought a lot of energy to the sets.”

Produced by Suraj (Jyotika’s brother) of Parallel Minds Productions, in association with Viacom18 Studios, Thambi, a Tamil-Telugu bilingual, has been shot extensively in Palakkad, Goa, Coimbatore and Ooty.

Mahasamudram actor Siddharth: I am a Telugu star and an Indian actor