Hera Pheri, which released on March 31, 2000, is counted among the best Bollywood comedies. It is centred around Baburao Ganpatrao Apte (Paresh Rawal), conman Raju (Akshay Kumar) and an unemployed man Shyam (Suniel Shetty). 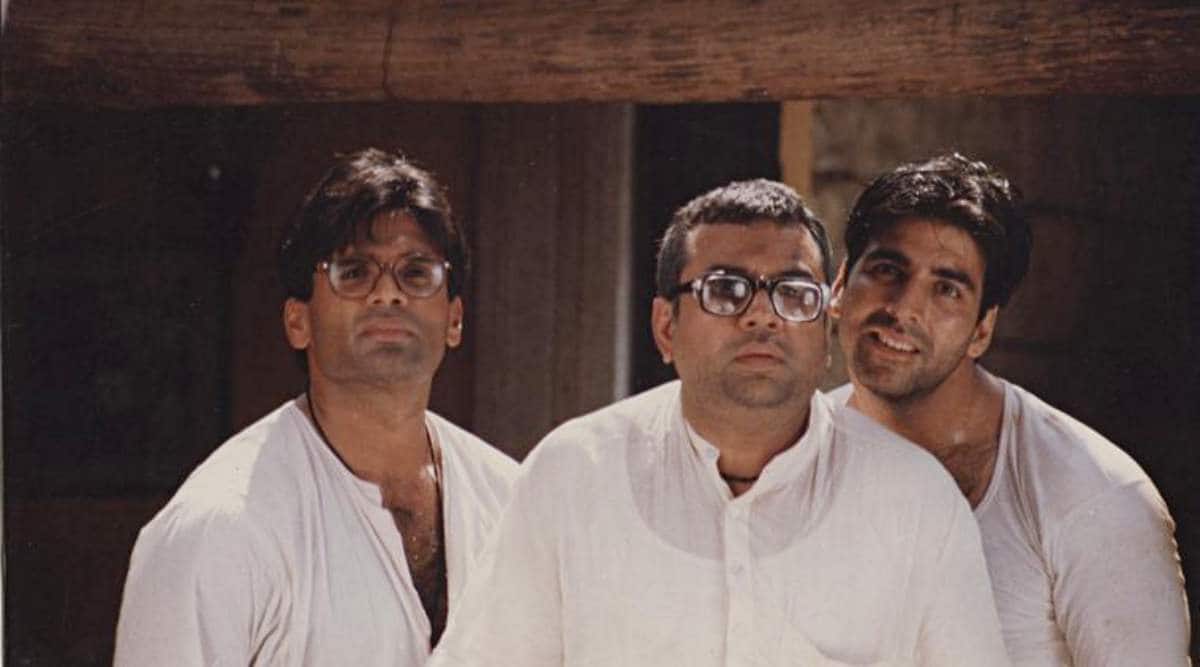 Priyadarshan’s comedy caper Hera Pheri completes 21 years of its release today. The film, which released on March 31, 2000, is counted among the best Bollywood comedies. It is centred around three men — Baburao Ganpatrao Apte (Paresh Rawal), conman Raju (Akshay Kumar) and an unemployed do-gooder Shyam (Suniel Shetty). One wrong phone call changes their lives forever, and they get involved in the kidnapping of a young girl.

Recalling the good old days on the 21st anniversary of Hera Pheri’s release, Suniel Shetty wrote on Twitter, “No wonder we underestimate how quickly time flies. It seems I blinked, and 21 years went by. What a film we made @priyadarshandir @akshaykumar @SirPareshRawal @GulshanGroverGG #Tabu. Missing #OmPuri ji very dearly today…”

Responding to Shetty’s tweet, Akshay Kumar shared how he had no idea “what a film we were making”. He also revealed his favourite scene from the movie is the one where he, Rawal and Shetty’s characters were fighting, and suddenly Tabu’s Anuradha came in the room. Akshay tweeted, “Agreed! Even we didn’t know back then what a film we were making, each scene better than the other. Specially love this one : dhoti. Genius of Priyan sir and epic dialogues by late Neeraj Vora.”

Hera Pheri is a remake of the Malayalam movie Ramji Rao Speaking’ by Siddique and Lal. In an earlier interview with PTI, Priyadarshan has called it a ‘humour of poverty’ which “is inspired by Laurel and Hardy, Charlie Chaplin.” He had also revealed how Rawal had a lot of trouble in getting into the role of Baburao Ganpathrao Apte. “He changed his body language and wore soda bottle glasses, which was challenging as you go completely out of focus. He would count his steps as he couldn’t see anything,” Priyadarshan said.

It wasn’t easy to work on Hera Pheri for Shetty and Kumar either. They had to sleep on newspapers to get that feeling of being uncomfortable. In an interview with IMDb, Shetty had shared, “The director would ask us to sleep in the afternoon on paper, so we used to sleep on newspapers. He (Priyadarshan) said I don’t want you to be comfortable. When you get up, you should have rested, but stay uncomfortable. So, we wore no makeup, nothing. Akshay Kumar, me and Paresh ji were constantly together, constantly rehearsing our lines, constantly improvising and Priyan sir is one man who knows when to say cut.”

Hera Pheri, which was a massive hit at the time of its release, now enjoys a cult status. It also starred actors Om Puri, Kulbhushan Kharbanda, Asrani, Mukesh Khanna, and Gulshan Grover.

Not making any political statement with Modi Season 2 – CM to PM: Mahesh Thakur

Taarak Mehta Ka Ooltah Chashmah actor Dilip Joshi blasts use of bad language on OTT shows: ‘Do you talk to your parents like that?’

Relief pours in from across district

Private vehicle would not come within the ambit of ‘public place’, says Supreme Court

Private vehicle would not come within the ambit of ‘public place’, says Supreme Court