‘Krishna garu was completely broken after the death of his son Ramesh Babu and then, Indira Devi.’
‘His second wife Vijaya Nirmala was also gone.’
‘I think Krishna garu had lost the will to live.’

“To say that a legend has gone would be an understatement. Superstar Krishna — that’s what we call him — was a hero and a role-model to us,” Nagarjuna tells Subhash K Jha emotionally.

Nag had met the thespian a few months ago.

“After his wife Indira Devi’s death in September, I visited him. Krishna garu was completely broken after the death of his son Ramesh Babu and then, Indira Devi. His second wife Vijaya Nirmala was also gone. I think Krishna garu had lost the will to live. He was lonely.”

Nag remembers Krishna as a pioneer of Telugu cinema.

Nag recalls Krishna as an erudite cineaste: “From box office collections to technical advancement, Krishna garu was well-informed about all the developments in cinema. I could spend hours with him, and I did.”

“Every few months, I would visit him. He had so much knowledge about cinema and so much gossip about the Telugu film industry. Sorry, I can’t share that gossip with you. But his knowledge of the goings-on were shockers. Trust me, spending time with Krishna garu was a treat.” 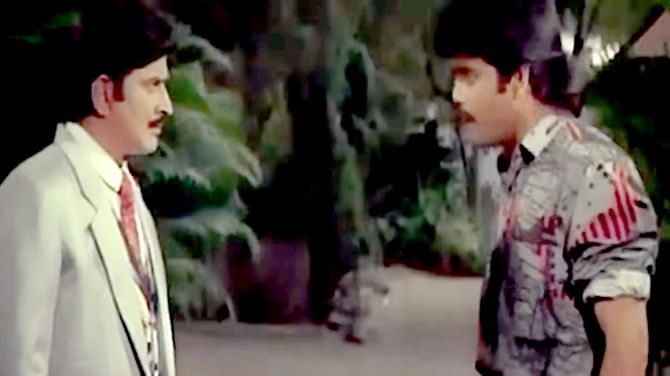 Nag and Krishna also did a film together.

“We did a film called Varasudu in 1993. It was a remake of the Hindi film Phool Aur Kaante. He played Amrish Puri’s role and I played Ajay Devgn’s role. I was supposed to hate him in Varasudu. That was really tough.”

“Krishna garu was such a warm generous and considerate man. The smile never left his face. I am glad he didn’t have to suffer much before going.”

Nag’s heart reaches out to Mahesh Babu: “This is Mahesh’s third loss in a row and perhaps the biggest blow. He lost his brother and mother this year. Mahesh is very family-oriented. He doesn’t socialiwe. To him, his family is everything. I can’t begin to think how much he must be suffering.”

Nag says he has always had a soft corner for Mahesh Babu.

“Although I am much older, we are very similar in background. Our fathers were reputed actors. Both Mahesh and I had to struggle hard to establish our own identity. I found my own style of acting, just like Mahesh found his.

“Now my son Nag Chaitanya is doing his own thing. I’ve tried to persuade him to be louder on screen, but he refuses. Mahesh has always said he has followed my path. I lost my father some years ago. The way to comfort yourself is to believe that he is in a better place. Although my father was much older than Mahesh Babu’s father, they were friends. I am sure they’re bonding up there now.” Corrie’s Rana ‘back from the dead’ in ‘sick’ controversial twist