When banal problems, drunken rants, liberally sprinkled swear words and WhatApp forwards kind of pretend profound lines run out, there is a lot of action between the sheets, observes Deepa Gahlot.

When a journalist doing a story on potholes, walks down a pitted street and steps into a puddle wearing six-inch stilettoes, you know Four More Shots Please is not a show about ordinary people. It is for, about and by the SoBo privileged.

Which, by itself is not an issue; wealthy and entitled people are real too!

But the series, obviously inspired by Sex And The City, looks and sounds like it was set in New York, and transplanted into South Mumbai, which gleams with colour, light and glamour.

This is the Mumbai (and India) where an actress can get married to another woman and openly flaunt her gay relationship. Where one-night stands and live-in relationships are common.

The first two seasons were loud and phony with the sexual and — in passing — work problems of the four women being yelled out at full volume.

Everything can be sorted by getting drunk on pricey booze at the adda, the Truck Bar, where the four friends congregate to share their troubles.

There was not much drama left over for a Season 3, but here it is, written by Devika Bhagat and directed by Joyeeta Patpatia, subdued compared to the first two seasons.

The journalist Damini (Sayani Gupta) is dating Jeh (Prateik Babbar), the hunky owner of the bar, who is commitment phobic.

Lawyer Anjana (Kirti Kulhari) raising her daughter alone after her divorce, finds her man-child ex-husband Varun (Neil Bhoopalam) parked on her couch. His second wife (Amrita Puri) throws him out after he drunkenly kisses Anjana.

A kiss? Seriously? These are adults, not katti-batti teens.

Umang (Bani J), a bisexual, runs a gym, but has career problems after her break-up with the actress she was about to marry; she makes eyes at the baker (Shilpa Shukla) down the street.

The whole gang, for no explicable reason, troops down to Punjab to confront Umang’s father who has disowned her over her sexuality.

The spoilt heiress Siddhi (Maanvi Gagroo) falls apart when her father dies, and throws immature tantrums when her mother (Simone Singh) starts dating again. She hopes to make it as a stand-up comedian with zero talent.

Jeh gets jealous when Damini, still recovering from a miscarriage, gets to work with a glib young politician (Rohan Mehra).

If you wonder how a series like this one could survive without Jim Sarbh, he lands up too with yoga asanas and pop wisdom.

When these banal problems, drunken rants, liberally sprinkled swear words (somebody on the writing team thinks shouting ‘vagina’ is oh so bold) and WhatApp forwards kind of pretend profound lines run out, there is a lot of action between the sheets (yes, an intimacy coordinator was hired).

Instead of genuine soul-searching or expressions of confusion, misery and joy, there are caterwauling songs spelling it all out.

To their credit, the actors are uninhibited and carry on gamely even when so many scenes and lines border on the ridiculous. At least, their wardrobes are always stylish. 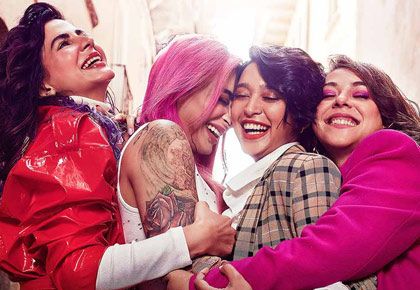