The already controversial storyline between 15-year-old Jacob Gallagher and Maya Stepney, his teacher and stepdad’s girlfriend, has taken a few more twists and turns in tonight’s (December 3) Emmerdale.

First of all, his lies about dating and having sex with Liv Flaherty were exposed when David Metcalfe talked to her about it. A confrontation ensued where Liv chewed Jacob out on it, leaving Jacob humiliated and his friendship with Liv potentially ruined.

Viewers weren’t that sympathetic towards him, though:

Then, after a blazing row between Jacob and David, Maya offers to talk to him one-on-one, and Jacob admits to her that he was trying to make her jealous, and she tells him she’s flattered.

While Maya tells Jacob that nothing can happen because she is David’s girlfriend, after they share a hug, she ends up kissing him!

She quickly regrets it and leaves the room, but the damage had been done: Jacob’s head is no doubt in a more confused place than ever, while viewers were left absolutely raging:

Emmerdale airs every weeknight at 7pm on ITV, with an extra episode at 8pm on Thursdays.

You can keep up with all the upcoming stories right here. 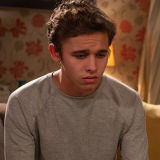 Digital Spy Soap Scoop video – hit play below for all the latest Emmerdale spoilers, as Maya crosses the line with Jacob, and Daz causes a hit and run.

Suraj Pe Mangal Bhari to arrive in theatres on November 15

Amitabh Bachchan says he must retire: ‘Head is thinking something else, fingers another, it’s a message’

Justin Bieber & Hailey Baldwin Invite Kylie Jenner To Their Wedding — But What About Kendall?