Dwayne Johnson has just revealed our very first look at the set of Disney’s Jungle Cruise, and it’s fair to say the film’s ambitions are about as big as its lead’s biceps.

In a brand new clip, Dwayne is seen welcoming fans to the massive, “years-in-the-making” set of Jungle Cruise, Disney’s latest project to bring one of its popular park attractions to life.

Pirates of the Caribbean, who?

Jungle Cruise, which was recently confirmed for a 2019 release, will star Johnson as the riverboat’s skipper in a role inspired by Walt Disney himself.

The film will follow a group of travellers as they embark on a river cruise (natch) through a jungle filled with dangerous animals – and equally dangerous people.

Because set to join the cast of The Rock, Emily Blunt and Jack Whitehall is American Crime Story‘s Edgar Ramirez, who has been confirmed as Jungle Cruise’s “conquistador” villain. 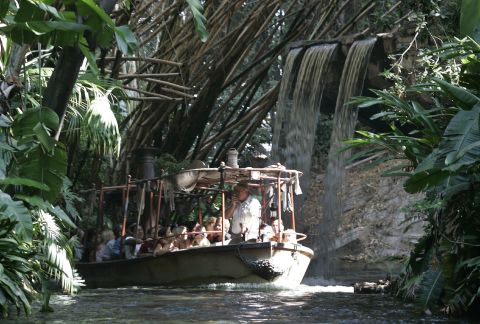 Spanish horror (!) director Jaume Collet-Serra, whose past films include House of Wax and Orphan, will direct, while Logan writer Michael Green has worked on the script.

Sure, we’re excited, but we can’t be the only ones a little scared… right?

Jungle Cruise will sail into cinemas on October 11, 2019.

Rashmika Has A Major Crush On Vijay, Not Deverakonda