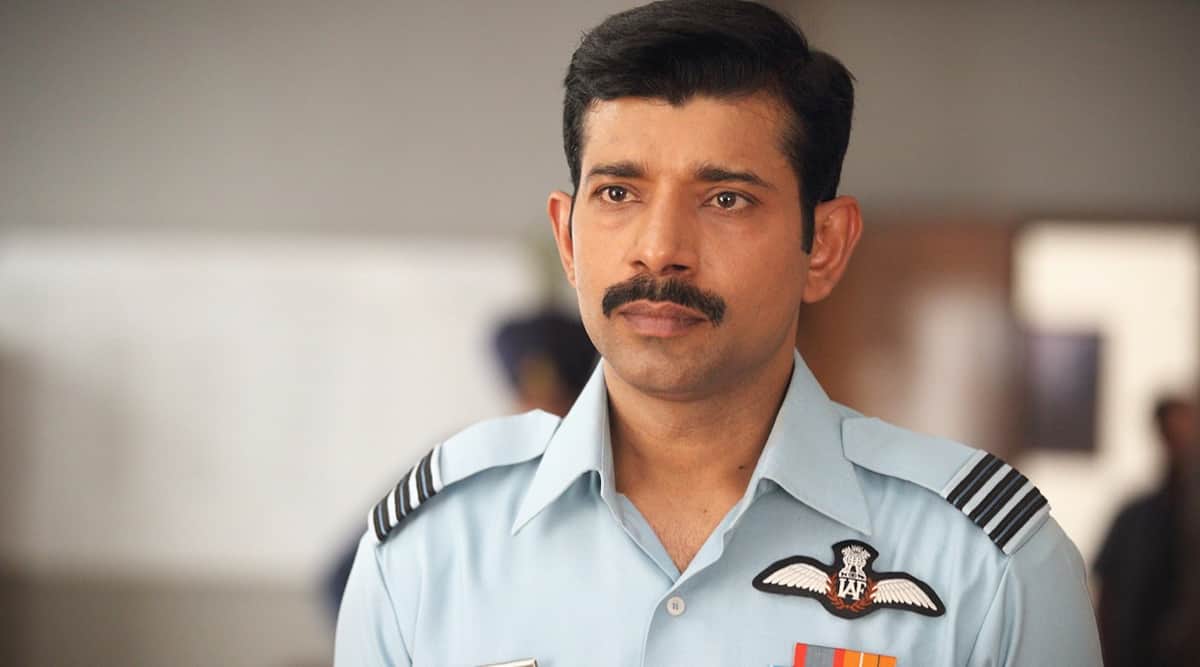 Vineet Kumar Singh reveals he deliberately tried to remain uneasy with Janhvi Kapoor on the sets of Gunjan Saxena: The Kargil Girl, which helped in his portrayal of IAF officer Dileep Singh. The actor also said Dileep’s behaviour comes from the thought process of several real men.

Gunjan Saxena: The Kargil Girl is based on the life of India’s first female Air Force officer to fly in a combat zone during the 1999 Kargil War. Directed by Sharan Sharma, the Netflix film also stars Pankaj Tripathi, Angad Bedi, Manav Vij and Ayesha Raza Mishra.

Gunjan Saxena: The Kargil Girl is Vineet’s third collaboration with Netflix this year, after Bard of Blood and Betaal. In a candid chat with indianexpress.com, Vineet talked about the patriarchal thought process of his character Dileep.

Q. How have the reviews been so far?

It’s great to get good reviews because filmmaking is about teamwork.

Q. You are the villain in Gunjan Saxena’s life in the film. How did you approach Dileep who has a patriarchal mindset?

I have two sisters who’ve been sportspersons. So when they went to the ground, I used to see certain things happening, dozens of eyes following them, which I did not like. I used to sit there so that they can train. Since I had seen all this very closely, I wanted to know where does this mentality come from. Dileep might be one single character in the film, but he represents 30-40 per cent of our population, who knowingly or unknowingly, do things without realising that they’re wrong. To me, Dileep Singh is an educated, successful man. Whatever he is doing is for the country. Though I was nowhere close to him personally, but still to me, he is not a villain. That’s his belief and conditioning. For once, I wanted to stand on the other side of the fence and see how things look from there.

Q. You have most of your scenes with Janhvi Kapoor. How was your off-camera rapport with her?

On the sets, she was never Sridevi’s daughter. She came like an artiste. Though I deliberately kept a distance. That ice-breaking hasn’t happened till date. That’s because our characters had an uneasiness. So I avoided gelling with her even off-camera. We never ate meals. I used to run away so that she remains uneasy if I ever look at her straight. I’m sure she never got to know the real me, but that helped in the performance. I saw her dedication and stubbornness to do good work. If someone is hardworking, they should get their due. Also, given she is a 23-year-old girl, we need to see that aspect too. If someone has that hunger to work, don’t take away their credit. It’s happened with me so I can say that.

Q. Do you think because Gunjan Saxena: The Kargil Girl is set in the 1990s, things were shown in a certain way? Would the film have been different if it were set in the current times?

The ground where I saw my sisters struggling has 50 girls practicing today. People’s thought process has changed, but obviously there’s scope for more. If there was no change, we wouldn’t have got Mary Kom, PV Sindhu, Saina Nehwal. It’s in every field. We’ve even got brilliant women directors, writers in Bollywood. India is a big nation with a huge population, so it’ll take a little longer for a deeper change to happen.

Q. How much do you think films like Gunjan Saxena and Saand Ki Aankh help in strengthening your filmography?

Both films are different for me. And the characters I played are completely opposite. Dr Yashpal (Saand Ki Aankh) sees hope in all odds. He sees hope in two grandmothers who do not believe in themselves. In the case of Dileep, he completely turns blind towards a girl who wants to fly. I like experimenting. By playing such varied characters, I am preparing a catalogue for myself as an actor. I want to win the confidence of the audience and filmmakers first.

Q. Your previous releases like Bard of Blood and Betaal received a mixed response. Do reviews bother you?

At this point of my career, I need to do my job honestly. I can only give my best in my work, not make the project reach the audience. My work will travel on its own. I haven’t run after money till now, because of which I’ve refused big projects too. My preference is to do new and challenging work with new people. The growth is infinite.

I'm a Celebrity fans notice a trend with eliminations

Samantha Akkineni may star in a bilingual biopic on Bangalore Nagarathnamma: report

After 3 years, Savitribai Phule Pune University’s IUCCA gate to be open once again for public

7 reality show winners who won by an absolute landslide – ranked!