Denise Welch returned to Loose Women for the first time in five years back in June and now the actress and panellist has opened up about just how “weird” she found it going back.

Welch was one of the main line-up of presenters between 2005 and 2013, having appeared on over 500 episodes of the panel show, and on today’s (August 4) Zoe Ball on Saturday, she revealed that the strangest thing about returning was the fact that it’s now filmed in a completely different studio.

“It felt weird at first, because of course it’s not at ITV building anymore – it’s at the old BBC building in White City,” Denise said.

“So that felt a bit weird, but by the time I was in the meeting room and then stood backstage, it was honestly like five years had just disintegrated. And I had a fantastic welcome from the girls going back.”

Last year, Loose Women celebrated it’s 18th anniversary, and Denise later hit out at the show for ‘airbrushing’ her out of their celebrations but she also added today that it feels “great” to be back on the show, and that “the time was right” to return.

“The time was right for us to leave, the ones who did five years ago,” she began. “So much has changed and it was the right time to go back.

“It feels great. I have a lot to say, and some of the things I can regurgitate and people think I’ve never said them!” 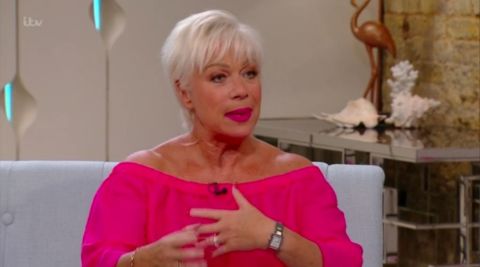 And while Denise herself is now busying touring the country in a production of Calendar Girls, she hasn’t ruled out returning for more Loose Women appearances either.

“Obviously I’m touring for the best part of a year, so it’s difficult. But when I’m near enough to be able to pop up and do a show, and then get back for the show that evening, then absolutely,” she replied when asked if she’ll be going back to the show.

A tribute to Luke Perry: From dreamy bad boy to TV's best dad