Vasan Bala’s Cinema Marte Dum Tak shines the spotlight on Vinod Talwar, Dilip Gulati, Kishan Shah and J Neelam.
All of them are articulate, witty, and expressive — talking of their passion for films, the rise and fall of their cinema, observes Deepa Gahlot.

The current generation of urban moviegoers watching films in the comfort of multiplexes probably have no idea about the subculture of C-grade films that ran in seedy single screen cinemas.

The Ramsay Brothers had captured the horror market, and Kanti Shah was the uncrowned king of the kind of films that were never released in ‘respectable’ family theatres, probably never telecast on prime time and almost never reviewed. They were made for earning quick money, not to appeal to the cognoscenti.

All of them are articulate, witty, and expressive — talking of their passion for films, the rise and fall of their cinema.

Kanti Shah has somehow become a cult thanks to some B-film fans, who built up his film Gunda on social media, but the others will never make it to any hall of fame.

Those films had their own stars, writers, technicians, and composers.

After having worked in hundreds of films, nobody outside their limited circle of viewers would have heard of Sapna Sappu, Vinod Tripathi or Amit Pachori.

Some of the actors like Kiran Kumar, Raza Murad, Shiva Rindani, Mohan Joshi, Deepak Shirke, Mukesh Rishi and Harish Patel did cross over to doing small parts in better rated cinema, but a large portion of their filmography is these B and C-grade films.

Baseer Babar, who wrote the coarse and colourful dialogue for those films, would have been as popular as Kadar Khan had the A-list directors signed him.

It is touching to see how thrilled the four are to be sought out for the series (directed by Disha Randani, Xulfee and Kulish Kant Thakur), and delighted at being given an opportunity to make a short film in the old style, on celluloid. That someone gave them respect as film-makers and was willing to talk about their work is clearly a high for them.(Kanti Shah appears for an interview but is not part of the film-making project).

They are, of course, caught up in the time warp of their halcyon says, so the films they choose to make now are as tacky as the old ones: Sautan Bani Chudail (Kishan Shah), Blood Suckers (Vinod Talwar), Jungle Girl (Dilip Gulati) and Shanti Basera (J Neelam).

Perhaps aware that today’s audience is different, Gulati wants to weave a message of saving the environment into his film, and Neelam wants to project strong women.

They reach out to their former collaborators and quickly revert to their quick-take style of direction, which means that the actresses have to show as much skin as possible, bare backs, heaving breasts and come-hither expressions is what is required of them in the name of acting.

They are all shot at work, and at their shabby, over-stuffed homes in the Mumbai suburbs, the wives speak candidly for the camera, and so does the Shah Brothers’ mother.

Being film-makers themselves, they are aware of the camera and also how to pretend as if it is all impromptu.

They do, however, portray unscripted emotions of pride, disappointment and later a small degree of shame at the kind of films they made.

They had to make a living like everybody else, they say, and they had to deliver what the distributors and exhibitors demanded.

To bypass the censors, they skirted dangerously close to the level of indecency that would escape cuts but also shot extra risqué footage for the markets that wanted more sex.

Cinema Marte Dum Tak is watchable for recreating that period and those forgotten films, even though it tends to be repetitive, and the line between tribute and send-up is frequently crossed.

In the attempt to avoid being judgmental, the exploitation of women is not adequately addressed.

J Neelam, who rose from being a bit actress to production assistant to director deserves a biopic: For a woman to survive in the film industry of that time is a story of true grit.

Those film-makers of the ’90s had stories to tell, no matter how rudimentary, a self-taught understanding of their craft and a pulse on the tastes of their working class audience.

The series is a celebration of those directors’ resourcefulness, economy and speed of film-making. Still what remains in the mind long after the six-episodes are done is the much-admired Kanti Shah saying that he often goes out to have a drink just to have someone to talk to. 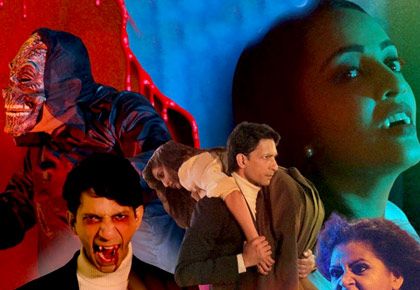 Rashami Desai’s mom on actor participating in Bigg Boss 13: ‘She didn’t ask me before going, she knew I would be angry’

Aryan Khan is not in danger!

Does India measure up as a maritime power?