Casualty newcomer Marty will be left in danger this weekend (November 24), when his colleague Jade takes their rivalry too far.

Former EastEnders star Shaheen Jafargholi has been cast in the role of student nurse Marty, who made his debut in the ED in last week’s episode.

Marty turned up in the department hot on the heels of Jade’s own arrival, after she was given a new opportunity from senior nurse Louise.

With the rivalry between the pair already in full swing, things will step up a gear in Saturday’s episode when they clash over a good-looking patient called Rufus. 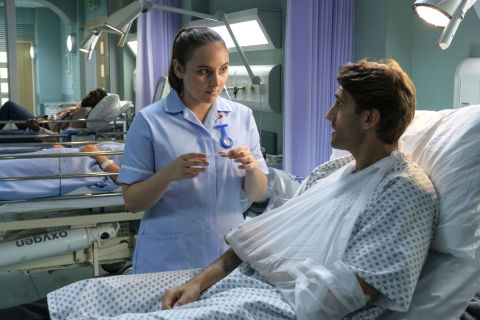 Despite being tied up with her own patients, Jade becomes envious after spotting Marty with Rufus and immediately makes herself available to “help”.

As they attend to his every need, both Marty and Jade are even more smitten when they learn that Rufus volunteers and is the lead singer of a band.

Unsure whether Rufus is gay or straight, Marty and Jade continually squabble over him, eventually deciding to settle things with a challenge.

However, when Jade later takes the challenge too far, Marty is left in a very perilous situation. Will he be alright? Or has Jade’s prank had devastating repercussions?

Casualty airs these scenes on Saturday, November 24 at 9.10pm on BBC One.

Kamal Haasan: His scripts both awe and inspire me

Modern Family: First look at Haley's wedding — or not

After Shivam Dube’s 34-run over, ICC asks who bowled most expensive T20I over; Stuart Broad responds