Why is Pratik so ANGRY?

When Nishant Bhat approaches her to ask about breakfast, Divya reveals she IS upset as nobody talks to her unless it IS related to cooking or household duties.

Nishant relays that to the other housemates.

Even Neha Bhasin tells Divya that nobody likes seeing her low and that she should snap out of it as the Bigg Boss game is brutal.

In the afternoon, Bigg Boss announces a new task wherein the nominated contestants will get a chance to save themselves from the danger zone.

Before the task begins, Nishant and Raqesh are given powers, as they are safe this week. They have to pick two contestants, who will get an disadvantage during the task.

While Nishant doesn’t want Moose Jattana and Pratik Sehajpal, Raqesh sticks up for his friends Shamita Shetty and Neha.

Since they cannot agree on two names, they get into a heated argument.

They finally decide that Neha and Pratik should get the disadvantage. Hearing this, Pratik loses his calm and starts screaming at Raqesh.

He accuses the Tum Bin actor of being a backstabber as he didn’t save Neha from the disadvantage.

Neha also understands and doesn’t blame Raesh for given her the disadvantage. Soon, the task begins and the housemates start strategising.

Moose decides to play the game with Divya instead of Pratik. This upsets him, and Neha tells him that Moose was never his true friend.

Despite a lot of drama and fights, nobody gets saved from the nominations as the task doesn’t get completed.

As a result, Divya, Moose, Pratik, Neha and Shamita are still in the danger zone this week. Later, Divya gets annoyed when Neha and Shamita don’t answer her.

In a fit of rage, she pours a bottle of oil in the food they are cooking.

Ms Shetty loses her calm and shouts at Divya. Both ladies argue and hurl abuses at each other.

At night, Raqesh tells Neha that he can’t be controlled by anyone and Shamita cannot dictate who he can talk to or not in the house.

Divya approaches Raqesh and tells him that she genuinely thinks of him as a friend apart from Nishant. The latter, however, is in no mood to talk and says to Divya that he is going to play alone and he does’t need anyone in the house. 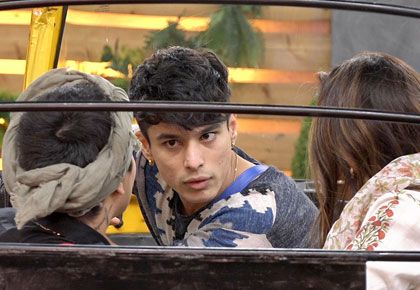 EastEnders' Dennis Rickman could be in trouble after latest Stuart scheme

How an anti-corruption bill became a showdown on democracy