Monday’s episode was all about the new captaincy task, which was not only boring, but also one-sided.

Sajid Khan ended up becoming captain without any trouble and most of the housemates didn’t mind.

But Tina Datta, who feels betrayed, has correctly decoded Sajid’s game and we can’t wait for her to start playing the game on the front foot. Priyanka Chahar Choudhary gets upset for not finding sugar in the kitchen area. She asks Archana Gautam to get some from her room.

Priyanka starts yelling at everyone for using sugar carelessly and then hiding it in their rooms.

Archana tells to give her a sugar packet but she says it’s not for everyone.

Hearing this, Priyanka gets even more upset and drags Shalin into the conversation.

For a change, Shalin doesn’t fight back and offers Priyanka his personal sugar.

Everyone is fed up with Priyanka fighting every morning. Bigg Boss announces that Sajid will be the tour guide in the captaincy task and will take two housemates with him to the activity area where they will decide who will stay in the captaincy race.

At the end of four rounds, the contestant whose photo stand remains in the activity area will become the captain.

Shiv strategises the task with his group and decides that Sajid should become the new captain.

Tina and Shalin agree, but they ask Sajid to save one of them when the time comes. Sajid seals the deal.

Archana, Ankit, Soundarya, Priyanka and Gautam realise it will be a one-sided task as Sajid Khan will not take them to the activity area.

Twist in the game! Bigg Boss announces there is a twist in the game as captaincy tasks are getting mundane.

Since Sajid is the captain, he will live in the house like a king and will not do any work. He also gets to choose everyone’s bedroom.

Sajid puts Abdu and Shiv in the room of two, as they are his favourites. Also, they will be safe from eliminations.

Next, Sajid picks Stan, Nimrit and Sumbul for the room of three. They also get special advantages.

The trio will only cook for the king and for the room of two and three. They will not do other house chores and will be safe from eliminations.

These contestants aren’t given any powers.

After the task is over, Tina is upset as Sajid did not save her or Shalin.

Tina confronts Sajid and makes it clear that she isn’t happy with the arrangement and how he did not keep his word.

At night, Shalin tries to explain to Tina that no one in their group is against them and that they are a family.

Tina doesn’t buy his theory and says she’s ready to flip because she’s here to win the show. The captaincy task was not challenging at all.

It’s clear that the house is divided into two groups and because of that, the show is getting boring and predictable.

It’s good to see Tina standing up for herself and showing some zeal to win the show.

Shalin needs to learn from her. 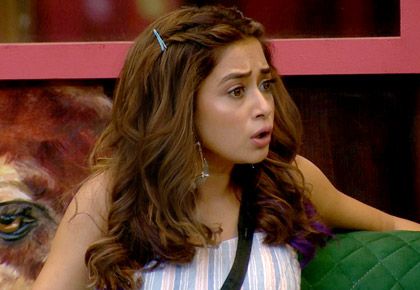 'RHOBH' Recap: Lisa Vanderpump Severs Ties with Only One Kemlsey Before Kyle Lashes Out at Dorit

The pandemic was therapy for me: Eijaz Khan