In Aspirants, Abhilash, SK and Guri chase the IAS dream from Delhi’s bustling Old Rajendra Nagar.
They are like the tripod; we are constantly reminded about their deep bond, but I didn’t feel the closeness, observes Sukanya Verma. 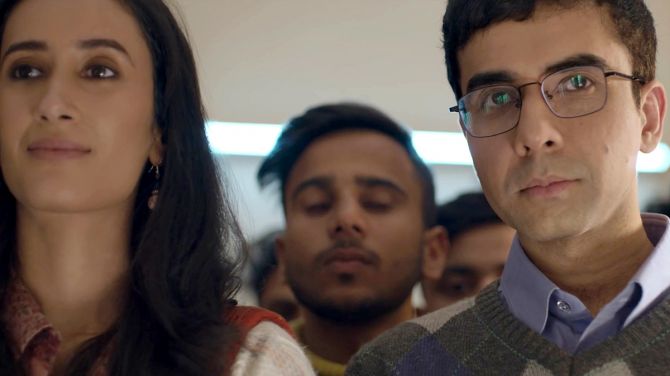 It’s considered one of the toughest exams in India, a Goliath-sized challenge that numerous Davids undertake in the hope of success.

Every year lakhs of students attempt the Union Public Services exam, which determines if they are worthy of India’s civil services. Often its position of power and prestige undermines its purpose of progress and implementing beneficial policies.

A kernel of the idea is reflected upon in Aspirants, the latest from The Viral Fever, a streaming force which has conquered the young demographic across their keen exploration of life around competitive studies and career.

In the course of its five episodes, each lasting roughly 45 minutes, the friendship between Abhilash (Naveen Kasturia), SK (Abhilash Thapliyal) and Guri (Shivankit Parihar), the titular aspirants chasing the IAS dream from the bustling neighbourhood of Delhi’s Old Rajendra Nagar, form the real focus of the series.

They are like the tripod; we are constantly reminded to drive in a point about their deep bond.

But for all its insistence to appear as the sort of ‘dosti‘ that powered the reconciliation in 3 Idiots, I just didn’t feel the closeness.

There’s a constantly snappish air to their interactions where Guri’s indulgence and SK’s tolerance of Abhilash’s obnoxious, indifferent, treatment of them doesn’t make any sense.

The story travels back and forth circling around their past and present to reveal a Dil Chahta Hai-like grudge they have carried over a period of six years.

While the reason behind their fall out takes its sweet time to disclose and to no dramatic effect, Aspirants becomes preoccupied in dispensing gyaan and motivational lecturing. Almost every scene is smothered in quotable wisdom.

There’s some entertainment value to that, I admit. Especially how it elevates the profound interactions between Abhilash and his mentor, Sandeep Bhaiya (Sunny Hinduja).

The moment when the latter explains the duality of power as a medium to produce light as well as electrocute while making a bigger point on responsible approach leaves a lasting impression.

The ‘tripod’ doesn’t do too bad for themselves.

Naveen does well to overcome his character’s inherent cynicism with his desire to do good, Abhilash shines in his opening monologue describing the cut-throat world of UPSC to the dummies in his classroom and audience whereas Shivankit is credible as the friend who cannot decide what’s more injured, his ego or heart.

After a point though, the verbose nature of the series, wherein every episode revolves around a lesson Abhilash must learn, gets overbearing.

The viewer is expected to share their technical knowledge and enthusiasm for UPSC ways and jargon.

There’s an easy charm to the gently blooming romance between him and fellow contender Dhairya (a lovely Namita Dubey) but sidelining her role in the events to occur cements the cursory feel of the friendship in question.

Amidst all these distractions, Aspirants slips the potential to become a telling acknowledgement on the nature of terrified ambition and arduous pursuits calling for personal sacrifice to offer yet another take on ‘Hum dost the, hum dost hain aur hum dost rahenge‘. Fatima Sana Shaikh on boycott calls for films: ‘Whether you watch a film or not, don’t have an agenda behind it’

Kamal Haasan: His scripts both awe and inspire me