The team hopes the authenticity of the series will help to change the public consciousness at a time when hate crimes against Asian Americans are on the rise. Up-and-coming actors will sometimes claim to know a variety of skills to be considered for roles, but Olivia Liang set a boundary early in her career.

Liang kept that promise. She learned martial arts as the lead of The CW’s new series, “ Kung Fu ” — and she’s getting paid for it.

“Kung Fu” is inspired by the 1972 series starring David Carradine. It stars Liang as Nicky Shen, who while visiting China, joins a monastery where she is taught Shaolin values and martial arts. When her mentor is killed, she returns home to find her community disrupted by a local gang. She must use the martial arts skills she learned to protect her neighborhood and family, and soon discovers she’s being targeted by the same assassin who killed her Shaolin mentor.

Liang says what makes “Kung Fu” different than the superhero shows The CW is known for is that Nicky is not a vigilante. 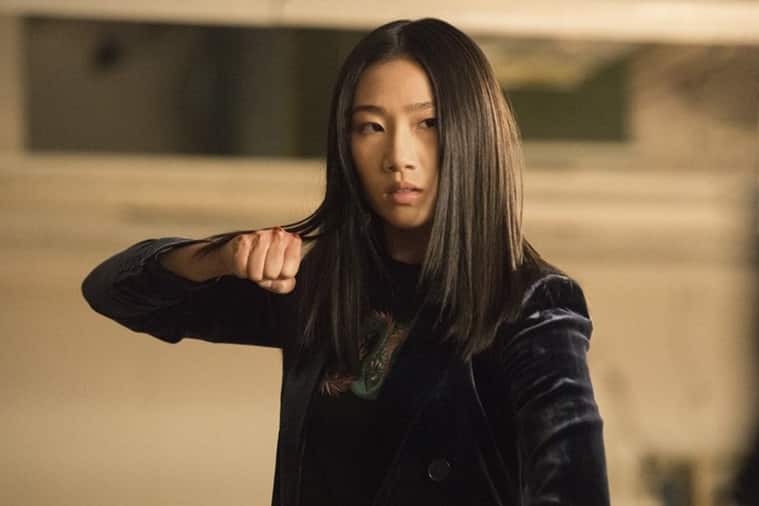 “Nicky is heroic, but she doesn’t see herself as a hero. She doesn’t have a hero complex where she is going out to find bad guys. She sees bad things happening and feels like she needs to do something about it.”

The series has a mostly Asian American cast with an Asian American showrunner and executive producer, Christina M. Kim. “I’m so excited that I get to give some people this opportunity to shine,” said Kim.

“When I was on set for the first time, we did a camera test and I literally was staring at the monitor and it just hit me. I was like, ‘I’ve never seen the screen filled with Asian American faces like this is.’”

Kim says her writers room is also diverse. She has five writers of Asian descent on staff. Half of the writers are also women, which Kim says is a novelty. “Usually it’s just me and one other woman in a room.”

“Kung Fu” premieres Wednesday on The CW and the pilot will be re-broadcast on TNT on Sunday.

Tzi Ma, who plays Nicky’s father, Jin, says it’s remarkable to have so many people with Asian backgrounds working on the show, because he doesn’t have to explain the Asian experience to people who are making creative assumptions to what that’s like.

“Not only is there representation on screen but we back it up from our writers room to all our guest directors. It is an amazing sight to behold. I’ve been doing this for a minute now and I have never seen this kind of make up,” said Ma.

Ma hopes the authenticity of the series will help to change the public consciousness at a time when hate crimes against Asian Americans are on the rise.

“The camera is a very interesting instrument. I want the audience to have the opportunity finally to see what real reputation representation is like. And when they get educated… they will begin to develop their taste of what’s good, what’s real and what’s true.”

The Asian American community is also paying attention, not only to see their stories on TV but to see how they’re told. Valerie Soe, a professor in the Asian American Studies Department at San Francisco State University, hopes the producers and writers will be careful with what imagery is presented to viewers.

“The tricky part will be for the folks who are in charge to make sure that the show doesn’t veer too much into older stereotypes and tropes.” She cites the gang storyline as potentially problematic because it promotes the theory “that all Asian men are gangsters and villains.”

Overall, Soe says the series is a win because it’s one more example of an Asian American story being told.

“There’s a phrase called ‘narrative plentitude’ that Viet Thanh Nguyen the author uses — about having a lot of different stories out there to pick from so we don’t have to just like obsessively focus on one. Like, ‘Is ’Crazy Rich Asians’ going to represent us accurately? Is ‘Joy Luck Club’ going to represent us accurately?′ It’s like, ‘Well, if that one doesn’t, then we’ve got this other one,’” she said.

Sree Vishnu: I was never a topper

Meghan McCain lashes out at Joy Behar: ‘Listen to me!’