NOTE: Contains spoilers for season two of The Handmaid’s Tale.

May the Lord open up a can of speculative worms.

As we wave a relieved goodbye to Gilead for another season and await the horrors showrunner Bruce Miller’s got in store for the third, there’s only one thing left to do: speculate the hell out of the show.

So much was packed into that tumultuous season two finale that there is a slew of open-ended plot points to make our third outing to Gilead an intriguing one to say the least.

Since we are facing a good number of months until the third season drops on Hulu, what better way to pass the time than to examine the very best of The Handmaid’s Tale theories – ranging from the realistic to the downright blasphemous…

1. June joins Commander Lawrence to overthrow Gilead and save Hannah 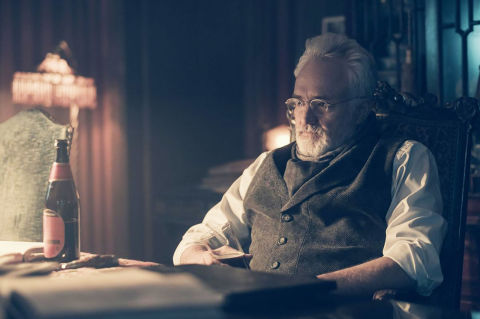 We might as well start with the biggie – although we were all screaming, “Why June?” as she turned down the chance for freedom in the season two finale, instead choosing to hand her newborn daughter over to Emily (Alexis Bledel) and turn back to face her fate in Gilead, it’s safe to assume her decision had something to do with Hannah (Jordana Blake).

As Miller himself confirmed to Deadline when asked why June (Elisabeth Moss) stayed, he replied, “Because she’s a mother. She has one child who’s going off to safety and one child that’s still here so she stays for her daughter Hannah… Season three is really about blessed be the fight. It’s about June rising up to either save Hannah or change the world.” Or perhaps a bit of both.

Let us turn our focus to Commander Joseph Lawrence (Bradley Whitford) for a moment, who was instrumental in helping Emily to escape. His role was an ambiguous one – on first impressions, he was yet another misogynistic megalomaniac who had potentially driven his wife to the edge of insanity. However, as his brief but poignant arc progressed, we discovered he was in fact part of the resistance (with a fierce sense of humour, to boot).

What’s this got to do with June? A lot, if the pair end up collaborating in season three. A number of fans are convinced “June will go to Joseph’s house” – either to seek help to find Hannah or to join forces on the resistance against Gilead. Reddit user canwin99 speculated: “June becomes Lawrence’s handmaid… June and Lawrence plan the destruction of Gilead together.”

Joseph would certainly be an ideal candidate for June to seek access to Hannah – plus they’d make a powerful duo in enforcing a Mayday takeover. Either way, there’s a lot of ambiguity surrounding Whitford’s character and the fact that he was only introduced in the penultimate episode suggests his story will continue in season three. Watch this space. 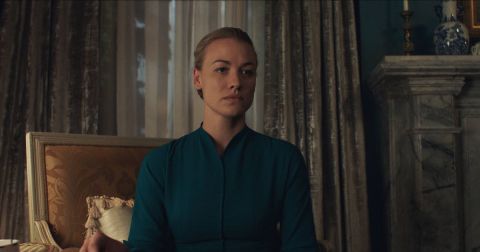 In season two we saw Serena (Yvonne Strahovski) go from being a cold, pious bitch to a cold, pious bitch with a heart. When seeking June’s help to edit some security orders as Commander Fred Waterford (Joseph Fiennes) lay in hospital, Serena finally acknowledged June’s former position – from this point, we witnessed a compelling battle both between Waterford and his wife, as well as her conflict from within.

Finally seeing the value in June’s rebellion, Serena’s allegiance in the coming of Gilead was gradually chipped away and eventually she agreed to hand over Nicole – whom she had fought so hard for – so that June and the baby could escape. And how could we forget the moment she stood tall in front of the council to read a scripture from Eden’s (Sydney Sweeney) Bible – costing Serena far more than just a slap on the wrist?

Many members of the fandom believe these acts of defiance suggest Serena could join forces with June in the Mayday resistance and help to bring down the very society she helped to create. Yes, she’s a nasty piece of work – but she’s also smart, powerful, and as proven by the book-reading debacle, aggressively brave.

3. Serena becomes a handmaid and gets pregnant 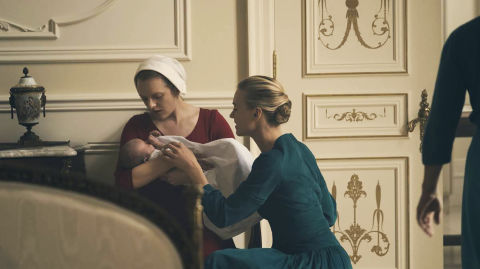 Shoutout to the creative minds who conjured up this crackpot theory. Instead of joining the resistance or submitting to her dastardly husband, some theorists reckon “Fred will be purged and Serena will become a handmaid.” A cruel twist of fate that would be indeed, made even crueler by Serena being impregnated by her Commander.

Is it likely? No. Would it provide a satisfying eye-for-an-eye outcome for all the Serena-haters out there? Absolutely. But in reality, there’s a better chance of Commander Waterford shaving off that goddamned beard.

4. Aunt Lydia will join the fight against Gilead (aka pigs will fly) 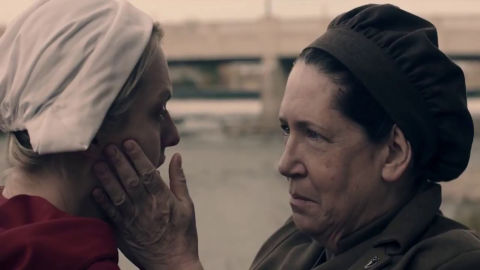 For a minute there we genuinely thought it was curtains for Ann Dowd’s Aunt Lydia. But that woman is like a cockroach – she’d survive an atomic blast, so a simple stab to the back/stair-fall combo does not spell the end for the character and her tyrannical rule just yet.

Miller confirmed it himself, revealing that while Aunt Lydia doesn’t die, “she’s transformed by this event.” Perhaps even more worrying is the fact that, “in her case, it makes her double down that she feels like she just wasn’t strong enough in her discipline. So she, I think, has decided it’s time to get tough.”

We dread to think what a tougher Aunt Lydia will look like – no more cattle prods and staged hangings – shit’s about to get real.

A toughening up seems likelier, but could it be that Miller’s just throwing us a red herring here? Some fans seem to think so, suggesting that on the contrary, Aunt Lydia could join the resistance, turning against the nation she’s worked so hard for. According to Reddit user BeautifulFreedom, “If Serena, June, Rita & Aunt Lydia join forces they could bring Gilead down.” It’s an unlikely foursome, but stranger things have happened throughout the course of The Handmaid’s Tale.

5. Season three will delve into the future of Gilead 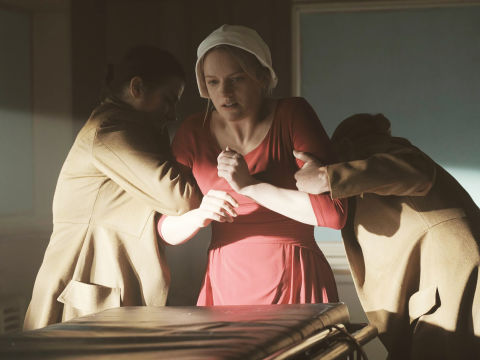 So far, The Handmaid’s Tale has only shown us the early stages of Gilead, taking place five to ten years after its founding. However, Margaret Atwood’s novel upon which the show is based covers a time span of 200 years. Some argue season three could include a time jump and we could see June ten or even 20 years in the future – whether as a free woman or still fighting against Gilead.

Or it could even take us beyond June et al’s stories entirely. “People talk about how we’re beyond the book, but we’re not really,” Miller told The Hollywood Reporter back in January. “The book starts, then jumps 200 years with an academic discussion at the end of it, about what’s happened in those intervening 200 years. It’s maybe handled in an outline, but it’s still there in Margaret’s novel. We’re not going beyond the novel, we’re just covering territory she covered quickly, a bit more slowly.” With 200 years to play around with, that’s a lot of story left to tell.

6. Emily makes it to Canada to find her wife with Moira 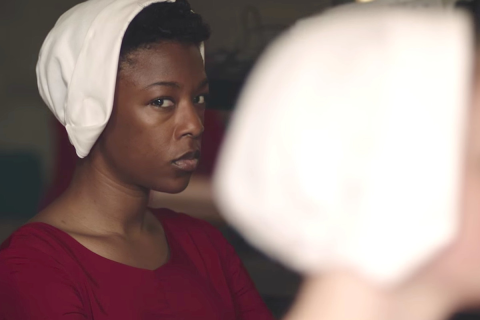 In the ideal world, Emily makes it to Canada, her wife and kid are totally fine, she teams up with Luke (OT Fagbenle) and Moira (Samira Wiley) and the three go on to bring Gilead down with the backing of the Canadian government. But this is The Handmaid’s Tale, which means Emily’s escape is going to be anything but straightforward.

Reddit user BiBiBicycle put forward a suggestion that perhaps Moira, Emily and her wife Sylvia (Clea DuVall) are more connected than we think. “I was wondering if possibly Moira has gotten together with Emily’s wife.

They would have reason to encounter one another, have things to bond over, and it would make for some interesting interactions with Emily. I’m not suggesting a love triangle, but maybe that could be a way for Emily and Moira/Luke to connect and get the word on June.”

Yeah, it’s out there alright, and highly unlikely for a multitude of reasons. But jeez, what a plot twist that would make.

7. Is Rita an American spy? 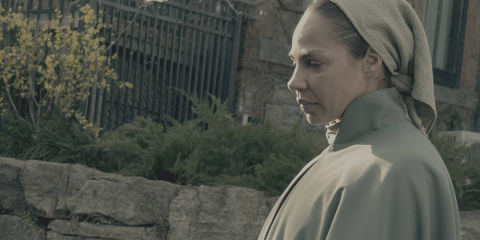 Of all the characters in The Handmaid’s Tale, Rita (Amanda Brugel) is by far the most elusive. Although we finally learn more about her nature in the second season, she’s still somewhat of a closed book and evidently likes to keep things that way, warning June that the young watcher Isaac could break her jaw without any consequences.

With this in mind, the theory that claims Rita is an American spy makes the most sense. Think about it – she’s not a devout Gilead follower, but she’s also not a rebel like June. It could be that she’s keeping a low profile in order to continue feeding information to outsider forces.

As Reddit user csemege explained: “There’s no way she’s a true believer. She can be religious, but not in the Gilead way. Remember when she said that Isaac could break her jaw without any consequences? She’s too smart to be a true believer… What if Rita is spying on them? What if she’s hiding something in those bean jars?” Mind blown. Hopefully there’s more on Rita and those bean jars to come in season three…

The Handmaid’s Tale airs on Hulu in the US and on Channel 4 in the UK.

‘City not finished yet, desperate to win treble’