Okay, so we have no idea how the Marvel Brain Trust decides on which real-life people to allow inside the MCU, because what follows is one of the weirdest lists of celebrities you’re ever likely to encounter. Not all of them are cameos – they might exist only as a casual reference.

It’s such an odd group, though, that only one of the following was deemed significant enough to earn a place on Steve Rogers’ post-freezer catch-up list.

The rest, well, see for yourself…

Stan Lee’s first MCU cameo set the standard for every single appearance that followed – each one has miraculously fit the tone of the film it’s in.

In Iron Man, the elderly editor is mistaken for Hugh Hefner, the late Playboy entrepreneur. With Stark being less James Watt and more James Bond in the first Iron Man movie, it makes sense that the Playboy Mansion exists in this universe – it’s a place we’re sure Stark has visited frequently.

It does feel weird that the opening salvo of a family franchise features a gag about a pornographer, but y’know, that’s Disney for you…

2. Kevin Bacon (Guardians Of The Galaxy) 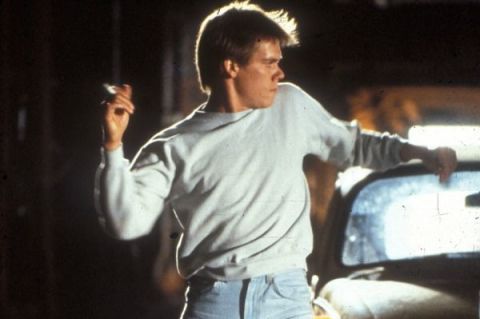 “On my planet, there’s a legend about people like you,” Star-Lord says in the first Guardians. “It’s called Footloose. And in it, a great hero, named Kevin Bacon, teaches an entire city full of people with sticks up their butts that dancing, well, it’s the greatest thing there is.”

That’s a line that throws the entire MCU into chaos.

You see, because of the ‘Six Degrees Of Kevin Bacon’ rule – which says that all actors are only six people (if that many) away from being in a film with Kevin Bacon – that confirms that Star-Lord is in fact not played by Chris Pratt, but actually IS Chris Pratt (Pratt appeared in Movie 43 with Emma Stone, who appeared in Crazy, Stupid, Love with Bacon).

That means we’re only a few films from an Avengers movie in which the plot revolves around all our favourite heroes (including Thanos – as Josh Brolin appeared with Bacon in Hollow Man) realising they’re only actors appearing in a highly successful film series. And they have a limited time to get profit share deals before the credits roll.

“Whether I was mentioned in the movie or not, in my opinion it was one of the best movies of the year,” Bacon says. “I loved it. And I didn’t talk to anybody who didn’t love it.”

In terms of other real-life folk, Guardians also features a Jackson Pollock sperm gag, and a spaceship named after Charmed star Alyssa Milano. 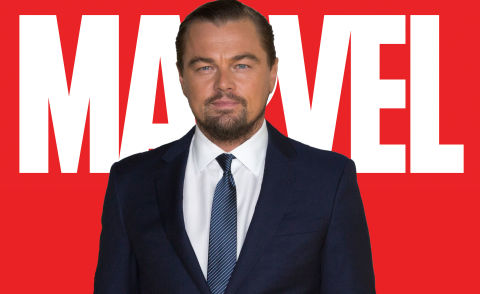 Luis: How serious are we talkin’, Scotty?

Scott Lang: [Looking at a safe] It’s a Carbondale. It’s from 1910, made from the same steel as the Titanic.

Luis: Wow. Can you crack it?

Scott Lang: Well, here’s the thing, it doesn’t do so well with cold. Remember what that iceberg did?

So, this Ant-Man dialogue explains why Leonardo DiCaprio will never do a film in the MCU.

That’s because it’s confirmation that in the MCU, Leo’s a movie star – which means he can’t just pop up to play Mr Fantastic or whatever.

It just wouldn’t work to have dialogue like ‘Hey, aren’t you Leonardo DiCaprio?’ with a reply along the lines of ‘No, I just really, really look like him’ every time Mr Fantastic walks into the room.

No, DiCaprio will have to stick to showing up in DCEU movies, which, as we all know, are what people in the MCU go to the cinema to see. 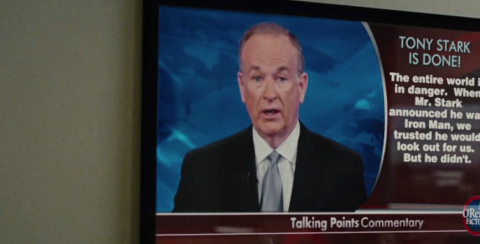 You know that episode of That Mitchell and Webb Look where those Nazi officers suddenly wonder: ‘Are we the baddies?’

Well, let’s hope that ex-Fox News host Bill O’Reilly had that conversation with himself before agreeing to do this cameo.

Because, if he didn’t, getting him to play a news host who criticises Tony Stark and calls Pepper Potts a ‘pinhead’ might have involved him convincing himself that he’s the sole voice of reason in the entire film.

The movie also features a cameo from Stan Lee playing Larry King, but we’re not sure if that means Larry King exists in the MCU, or if he’s Stan Lee in the MCU.

Man, these Stan Lee cameos can get confusing.

“It’s not based on him, it’s based on the comic book,” Favreau said when asked if Tony Stark is based on Elon Musk. “But Robert Downey, when we were prepping Iron Man, said, ‘There’s somebody we should sit down and talk with’.

“[He] said, ‘This is a guy who can give us some insight into what it’d really be like to be Tony Stark’.”

Musk also helped the crew out by letting them use his company Tesla as a location for the film, so Favreau and his team stuck him in the film to return the favour, with a gag about Tony helping him out with an electric jet.

It’s currently unconfirmed if that sports car Musk launched into space was part of the jet’s development process. Also, so far, Tony Stark has not to our knowledge unfoundedly accused any heroic divers of paedophilia.

Yep, we know there are at least two real-life Presidents in the MCU, thanks to a stack of books in The Winter Soldier. But that leads to some problematic timey-wimey stuff (but it’s not as if the MCU has ever had that issue before).

That’s because Matthew Ellis was President in Iron Man 3 and Winter Soldier. Those films took place in December 2012 and April 2014, which means that Obama didn’t serve a second term in the MCU.

It’s as yet unconfirmed if Captain America allowed Donald Trump to be elected, but we have to say the chances aren’t high.

Okay, the flip phone thing makes sense because it was given to him by fuddy-duddy Steve Rogers, but someone needs to gift Tony a nice iPhone next Christmas to replace his Vivo device, if he’s still alive after Avengers 4 to receive it.

Steve Jobs is the only real person named on Steve Rogers’ catch-up list, which also includes The Beatles and Nirvana – but they could include anyone in the Marvel Universe, so we’re not counting them.

Samantha Akkineni may star in a bilingual biopic on Bangalore Nagarathnamma: report

PIX: Priyanka gets romantic in Miami

Tyler, The Creator Disses Kendall Jenner On Stage & Tells Her To ‘Shake Them Bones’ — Watch