Images from Day 3 of the ICC World Test Championship final between India and New Zealand, at The Hampshire Bowl, in Southampton, on Saturday.

Skipper Virat Kohli and his deputy Ajinkya Rahane perished to well-executed plans by New Zealand’s pace attack, leaving India at 211 for 7 at lunch on Day 3 of the World Test Championship final, in Southampton, on Sunday.

India scored 65 runs in the first session but lost four wickets. Anything in the vicinity of 250 should be a good total in prevailing conditions.

The overcast conditions made batting difficult and the likes of Kyle Jamieson (20-12-26-3), Trent Boult (20-4-46-1) and Neil Wagner (15-5-40-2) indulged in a ‘who blinks first’ game with the Indian batsmen and came out trumps with some incisive seam, swing and short-pitched bowling. Kohli (44, 132 balls) was unable to add to his overnight score as his Royal Challengers Bangalore teammate Jamieson kept him guessing from the start.

Having shown admirable patience in leaving every delivery outside the off-stump on Day 2, he was ready to dig deep again. Boult and Jamieson kept bowling outside the off-stump channel but he kept leaving the ball before the 6 feet 8 inch Jamieson went slightly wide off the crease and got one racing into the batsman’s boots to give the Kiwis an early breakthrough.

Kohli was adjudged leg before wicket. He had a chat with Rahane before deciding to review the decision. 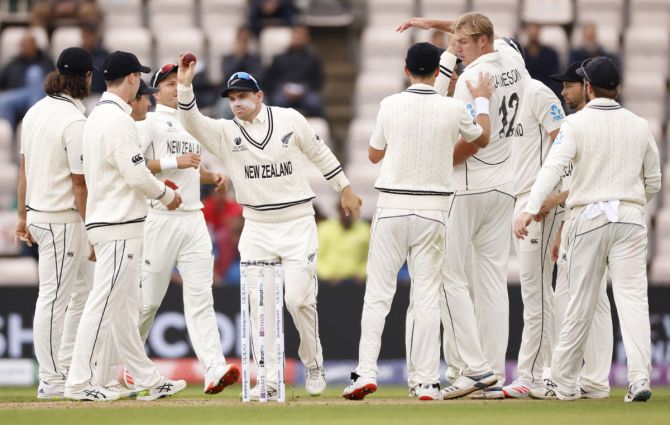 The bowler went fuller with the length, got the ball to come in sharply and Kohli, caught on the crease, was beaten by the movement. There was no bat involved and the impact was in line, the ball going on to hit leg stump and Kohli had to make his way back.

He was dismissed for a 44 off 132 balls as India lost their fourth wicket. Rishabh Pant (4) went without a run for 19 deliveries before he got a boundary with a flick through mid-wicket. Two balls later, he bit the bait when Jamieson angled one on the imaginary fifth off-stump. He went for an expansive drive and Tom Latham took a sharp catch, diving to his right, at third slip.

It was was a poor shot from the youngster who batted patiently till then. He needlessly attacked a wide out-swinger without any footwork and paid the price.

Once the 61-run stand with Kohli ended, Rahane (49, 119 balls) sensed that the scoreboard needed a move on and started playing a few shots. 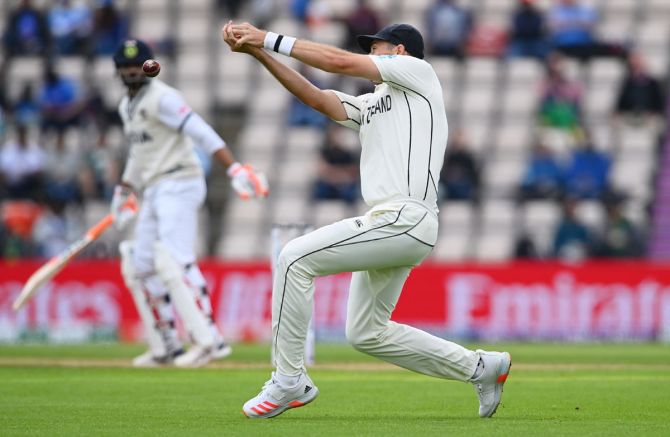 Perhaps, the half-century milestone was playing on his mind and he mistimed a pull-shot before Neil Wagner, with his signature short ball, prevented him from registering what would have been a well-deserved fifty.

Rahane’s disappointment was evident as he fell into the trap and played the pull-shot despite knowing that Wagner had kept a deep fine leg and long leg for the shot.

His pull did not have the elevation as Wagner hurried him into it, with the ball climbing on him sharply, and Latham took a simple catch at mid-wicket.

Ravichandran Ashwin (22, 27 balls) threw his bat around and got some useful runs but was never going to last long as Tim Southee (22-6-64-1) took care of him just before the lunch break.

Wales ready to test Spain regardless of Bale’s fitness

Sikandar to Hand Lovely Over to Police After Knowing Kullfi’s Truth!