‘When I first met him, I felt he had given up on life, but now his willingness to live has enhanced.’ 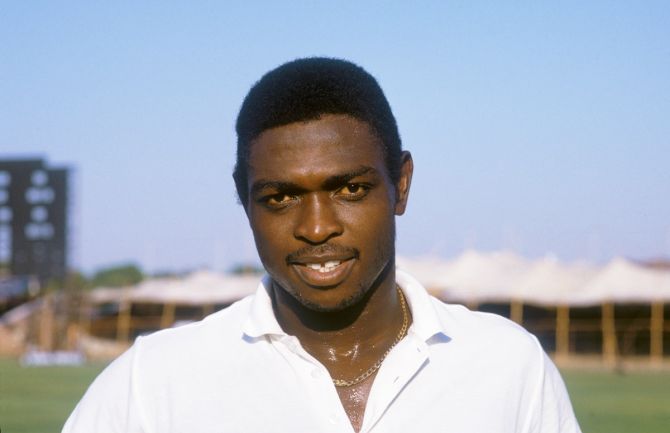 A journalist relentlessly follows a story; sometimes for days, months or even years; but once it is posted on the Internet or in print, that’s the end of it for her or him. S/he moves on to pursue more interesting subjects.

That, however, is not the case with Bharat Sundaresan, who tracked down West Indies fast bowling great Patrick Patterson (external link) for six years in the Caribbean and forged a unique relationship with the now reclusive, but menacing pacer of his time.

Moved by Patterson’s plight, Sundaresan made a passionate appeal to the cricket community on Twitter on Thursday, saying the West Indian’s ‘day-to-day circumstances have really worsened with time and he is unable to buy groceries or manage two meals a day’ and set up a @gofundme and Ketto for him.

Laxmi Negi/Rediff.com caught up with Sundaresan — one of the finest cricket writers around — to find out more about Patrick Patterson and the fundraiser.

What touched you about Patrick Patterson?

My story has been received very well all over. But after meeting him I personally realised that this man has no one and he doesn’t know anything about the current world that we are living in!

He didn’t know about the Internet; he said he doesn’t know that women play cricket at the highest level and had no clue about T20s.

He is so cut off from the world that I felt that I am his window to the world as I kept in touch with him.

How frequently do you call him?

The first two years we used to call each other. From the last two years, whenever he wants to have a chat, he will give a miss call. It’s once a month, generally.

Sometimes when he goes through these tough phases, I will have a couple of frantic miss calls on my phone. It is alarming, because due to his paranoia, his tone is high-pitched and I would try to calm him down.

You met him in 2017; it has been almost four years now since. Have you seen any improvement in his condition?

See, I don’t know what can we call his situation. I am no expert. While interviewing him, I also noticed that when we spoke about scorecard he remembered a few things, but not the incidents.

So, during our chats, I would sometimes read out the scoreboards of his playing days from county cricket or the Sheffield Shield. Whenever a name was thrown at him, he would remember a few things. But I would say that there has been an improvement in that regard.

Also, he still owns a transistor, and when he heard about Kagiso Rabada in 2018 he was very happy. When Lungi Ngidi’s run-up was also compared with him, he once said how he wished he could see them.

When I offered to buy him a smart phone, he refused. He never accepted any financial help from me.

Whenever I call him, I always call with a hope that he is fine. Our relationship is all based on hope. There is nothing I can do to change his situation. As he is paranoid, he refuses to meet new people and says he won’t be comfortable around them.

So, what made you think of crowd funding?

A month ago, I received a couple of missed calls from him. I knew something was up.

When I called him, for the first time he said he needed help as he was running short of groceries. These days I have been talking to him on a daily basis and last week he said he hasn’t eaten. I didn’t know how to react to that.

When I asked for his bank account details I realised that since he has no money, he doesn’t have a bank account and his driving license has expired!

It feels like he doesn’t exist in this world or he is in some periphery of this world!

I had never done any crowd funding, but had heard about it. I just tried it. What made me confident that whenever I tweeted about him, he received a lot of love.

It is so heartening that within 24 hours we have generated $5,000. Some players have contacted me personally and have expressed a desire to help him.

I have a friend in Jamaica and through him I can send him some help.

What was his reaction?

I spoke to him a few hours ago and he was touched. Then he started telling me how money is secondary, but he is grateful that he has someone in me who has been there for him.

He revealed that due to his high pitch tone he distanced his family and friends, but he was glad that I stuck to him.

I am not an emotional person, but what he said was very touching. It was, overall, a very touching phone call.

He revealed that in the past whenever he tried taking financial help from any friend that relationship broke down. But now he is looking forward to life.

A few days ago, he was asking me about his first local club where two administration men were kind to him and he wanted to know about them.

When I first met him, I felt he had given up on life, but now his willingness to live has enhanced.

You can support West Indian cricketing great Patrick Patterson through the crowdfunding campaign, set up by Bharat Sundaresan, with a donation here.

‘If you can’t respect players, don’t come to stadiums’